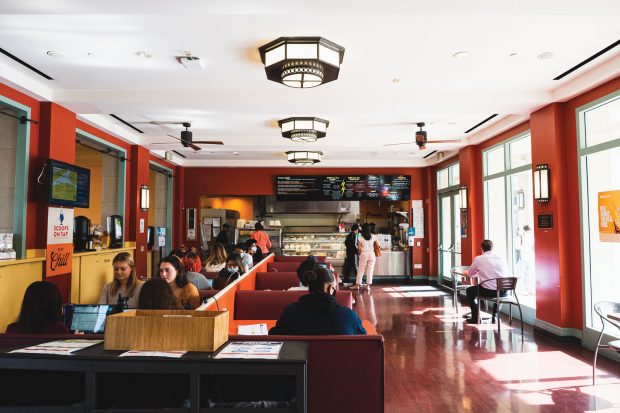 As an alumna working at the College, students often ask me, “How has the campus changed since you were a student?” Without hesitation, I always answer, “The Coop Fountain is completely different.”

Smith Campus Center didn’t exist when I was a student (construction began the fall after I graduated); the Coop Fountain was a standalone building. If a contemporary of mine from 1993-97 were to return to campus for the first time today, the Fountain would be unrecognizable to them.

I started wondering, “What was the Coop Fountain like in the generations that came before me?” With the help of Sean Stanley, the College’s archivist, I discovered a long history of the Fountain reinventing itself every 10 to 20 years, in an effort to meet students’ evolving needs in a world that has changed despite the seemingly insular bubble of campus.

First, I needed to know, where does the name “The Coop” come from? Is it a reference to where Cecil Sagehen roosts? Sadly, it is not. The Coop finds its origins in the Student Cooperative Store, established during World War I as an army canteen for Pomona’s Student Army Training Corps. After the war, the Coop continued to sell merchandise and served as a place to rendezvous between classes and as a clearinghouse for used books.

In 1929, a student union building was proposed by both the administration and students, but the Depression put those plans on hold. By 1936, economic conditions were improving, and the desire and need for a building to house student activities and to serve as a social center were strong. The increased use of cars had led to a fragmentation of the college community as students traveled long distances to hotel and club ballrooms off campus for diversion. Many students at the College were involved in car accidents during this era of open cars. A student union containing a ballroom and gathering spaces seemed like a non-negotiable.

The first student union was erected in 1937. Enough funds were raised to build the main building and the west wing, and a soda fountain and sandwich facility were part of this new gathering space. The building was unnamed until 1948, at which point it was named Edmunds Union. “For most, however, the union would always be ‘the Coop,’” according to the book, Pomona College: Reflections on a Campus.

After World War II, in 1950, construction began on the east wing. The soda fountain and restaurant moved to this new addition, which provided larger facilities to serve 100 people. A covered patio was added, providing an outdoor dining area. During this era, students would roll a juke box onto the patio for Wednesday and Friday night dances, and the Fountain furnished the nickels to play the records. Men would play bridge at the Fountain, and shouts of “fourth for bridge?” were a common refrain.

“It was like our local soda fountain,” Louann Jensen ’55 says. “I would always go through there going to class to see who was there, see who was hanging out. It was the social center because the boys were in one campus up north and we were down south. We didn’t see boys except in classes, so it was a place to intermix.” She adds, “I had one friend who worked there, and I always envied her for working there.”

By the late ’60s, however, the facilities were deemed “unsatisfactory for today’s concerned generation” by a committee appointed to work on the improvement of the student union. While the building served the needs and interests of students in the ’40s and ’50s who were “more interested in dances and intercollegiate activities,” a press release stated, “students today are more involved in social and academic issues.”

The renovations to the student union, completed in 1970, enlarged the Fountain considerably once again and included an outdoor deck facing Stover Walk to the south instead of College Way. A game room with Ping-Pong and pool tables was added just off the restaurant. A full-time manager was brought on to supervise the Fountain, to hire and train student workers and to purchase food. Hours were extended, with the Fountain open from 9 a.m. to midnight Monday through Friday, 4 p.m. to midnight on Saturday, and, for the first time, on Sunday too.

Hopes were high to “reestablish the Coop as the center of campus activity, not only recreational but intellectual as well,” a letter from the committee to faculty and staff proclaimed. The Fountain had lost much of its popularity during remodeling and in competition with The Hub at Claremont McKenna College. To bring back business, the service would be faster at peak periods and the menu would be more appealing, including healthier foods such as a hamburger that was entirely “vegetable-derived.” 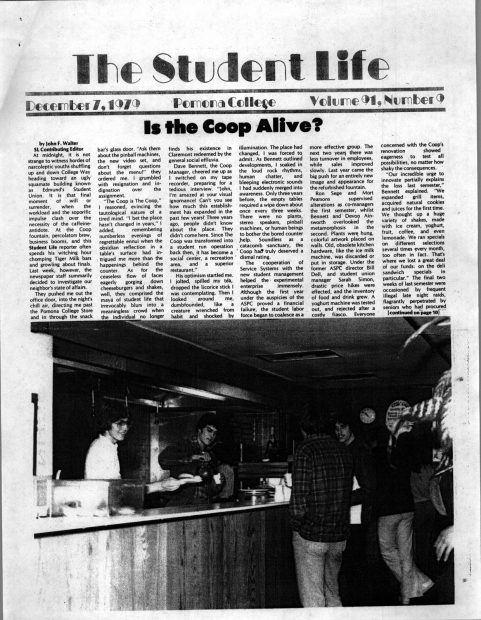 Apparently, those hopes weren’t realized. In 1979, The Student Life published an article with the headline, “Is the Coop Alive?” According to the article, three years prior, “people didn’t know about the place,” “the empty tables required a wipe down about once every three weeks” and it was “soundless as a catacomb sanctuary.”

The Fountain had been run by an outside food service contractor, but in 1976 two students struck a deal to take it over. They brought in pinball machines and video games, dimmed the lights and cranked up the music. They expanded the menu to include more grill items, and the Fountain staff thought up new ideas for a wide variety of shakes. The Fountain had “become a social center, a recreation area, and a superior restaurant” according to Dave Bennett ’80, a student manager, in the TSL article. “Students have a better idea of what students want. They order things that will sell,” according to the staff manager of the student union in another TSL article published in 1980. 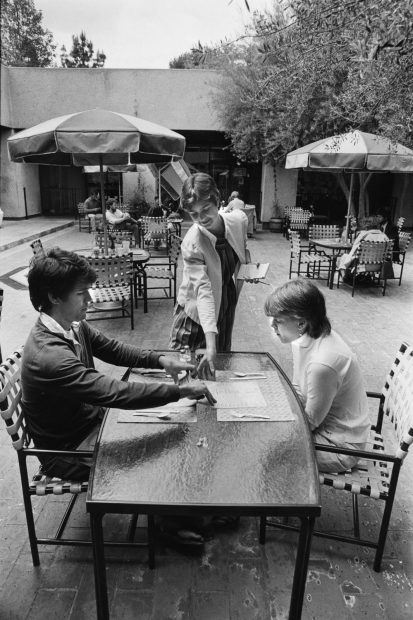 The attitude of innovation continued during this era of student management. During the ’80s, the Fountain opened The Courtyard Restaurant, with waitstaff and a limited menu, for lunch and dinner. The staff also experimented with iced coffee, brewing it in the morning and combining it with ice cream to create the Coop’s famous coffee shakes. Lian Dolan ’87, who worked at the Fountain from 1983-86, says, “We started buying gourmet coffees. We’d make super strong coffee in the morning and then pour it over ice. We cared deeply about the coffee.” Through the ’80s and ’90s, popular menu items as recalled by alumni were shakes, curly fries, mozzarella sticks and quesadillas loaded with lettuce, tomatoes, sprouts and salsa.

While I was a student, one could use two meal swipes each week at the Fountain. The two I relied on were the grilled turkey sandwich meal, which included a side of chips and salsa, and the “meal” of curly fries and a shake. My go-to shake was the Orange Caesar, a riff on the Orange Julius, made with vanilla ice cream and orange juice. 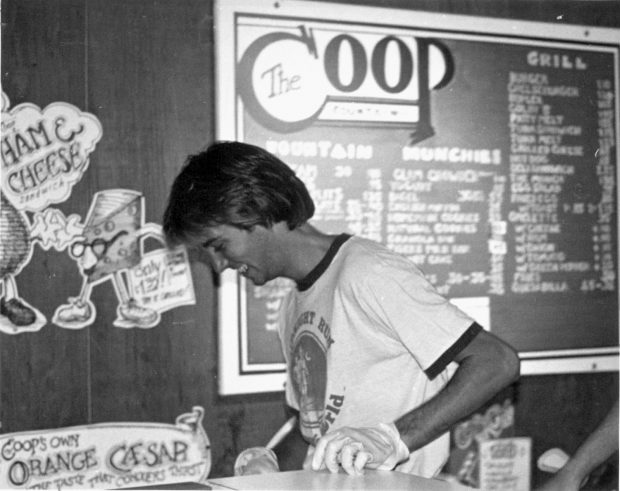 The ever-changing menu displays favorites of another era, including the Orange Caesar shake

Physically, the Fountain was “grungy” and “dingy,” according to people who were around during that time. I couldn’t quite remember what it looked like and failed to turn up any photos from those pre-cellphone days, but fortuitously Chris McCamic ’97 had filmed a movie for his senior project, calling it Tales from the Coop. His campy horror film provided a time capsule of the final days of the Fountain. Indeed, the space was a bit run-down and in need of updating.

In the fall of 1997, the existing student center was demolished; all that was spared was the ballroom. When President Peter Stanley arrived in 1991, he had professed his desire for a new center which would bring together the entire college community. No longer would it be a student union; the new building would be the Smith Campus Center, serving students, faculty, administrators and staff.

Two years later, the Coop Fountain took on a shiny new form with chic metal café tables inside the looming campus center. As different as it was in appearance, however, it retained largely the same menu of burgers, sandwiches, fries and shakes. It turned out, though, that students weren’t inhabiting the new campus center. So, seven years after its completion, the building—and the Fountain—got a facelift to the tune of $9.7 million. The Coop Fountain was furnished with booths and sofas, and its white walls were painted red. The game room, which had been placed upstairs, rejoined the restaurant downstairs. An additional room with glass doors was added to the Fountain, doubling its size and connecting it to Sixth Street via a north patio.

Since its founding, the Fountain had been financed by student funds, but it almost never turned a profit. At best, the Coop Store would make enough profit to cover the restaurant’s deficit. Over the last decade, the combined shortfall from the Fountain and Store hovered around $100,000 each year, according to Associate Dean of Student Life Ellie Ash-Balá, who oversees the Student Senate as the director of the Smith Campus Center. Faced with losses that cut into the ability to fund clubs and other activities, the Student Senate made the difficult decision in Spring 2021 to turn the Fountain over to dining services.

Beginning this fall, the Coop Fountain has once again been reinvented. While there are still burgers, curly fries and shakes on the menu, options have been updated to include items such as a Middle Eastern sweet potato wrap, vegan Korean fried chicken and a chopped-salmon sesame noodle salad.

Students still have the opportunity to work at the Fountain, alongside dining services staff. Faith Henderson ’25, a first-year student, enjoys meeting people as she takes orders as well as engaging with the campus dining workers. Fredrick Omondi ’25 loves the social aspects of working there—meeting people, interacting with the chefs and fellow student workers—as well as the satisfaction of serving people. He especially appreciates being able to choose his own hours. Additionally, a Coop Committee has formed to give student input on the Fountain and to “maintain the service, culture and traditions associated with the Coop Fountain,” according to Adeena Liang ’23, who served as vice president of finance for the Associated Students of Pomona College (ASPC) during the 2020-21 academic year and continues to serve in that role this year.

One Monday afternoon, I ventured over to the Coop Fountain to try a shake to see how it compared to the ones I remembered. It turned out I didn’t really remember what the old shakes tasted like. In my mind, they had been sublime, but without really remembering, I decided to enjoy the strawberry shake for what it was. 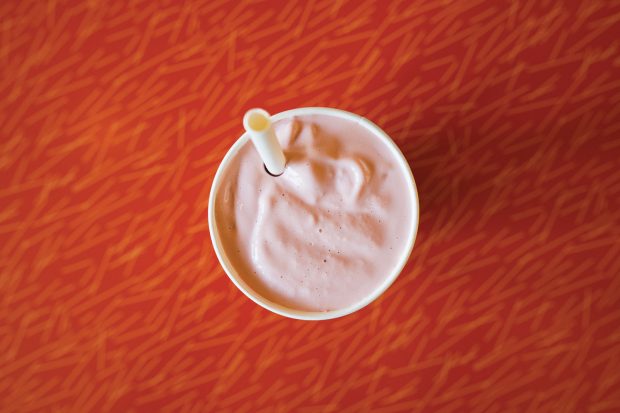 The Coop Fountain Over the Years 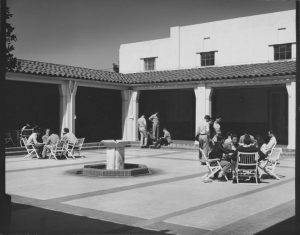 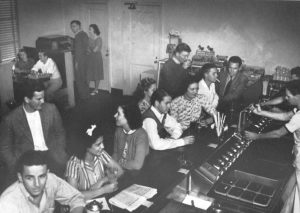 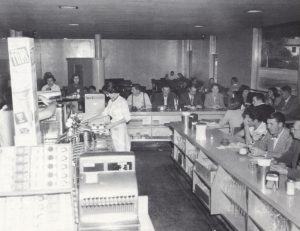 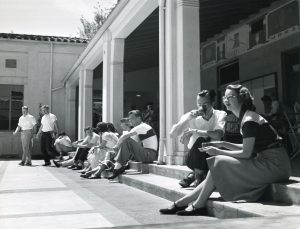 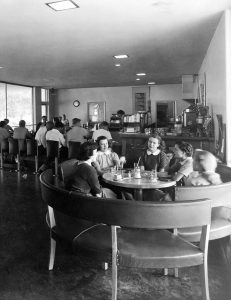 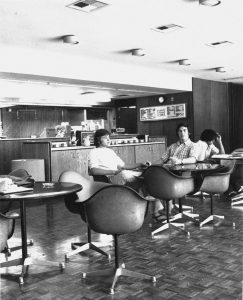