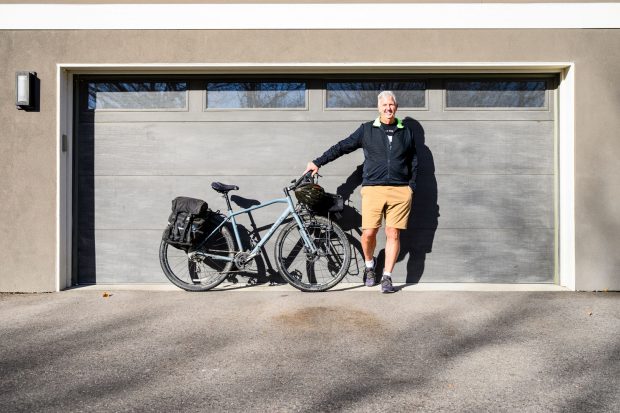 John Boutelle, a 1981 alumnus of Pomona College, is pictured with his grey Trek bicycle, nicknamed the “Alaskan Tank,” outside of his home in Madison, Wis., during late autumn on Dec. 2, 2021. Boutelle, often accompanied by fellow Pomona College alumnus Peter Pitsker ’81, recently completed a 17-year quest to pedal a bike through each of the 50 Unites States. (Photo by Jeff Miller – www.jeffmillerphotography.com)

John Boutelle ’81 has completed his 17-year quest to pedal through each of the 50 United States. Often accompanied by fellow Sagehen Peter Pitsker ’81 and/or multiple family members, Boutelle finished the journey in Rhode Island (now Rode Island) on September 16, 2021. Here is an update to the piece he wrote for the Spring/Summer 2009 issue of Pomona College Magazine, with answers to your burning questions.

A: To quote a favorite line from Richard Powers’ The Overstory: “Makes you feel different about things, don’t it?”

When you experience the sights, smells, weather and terrain of a place on a bike, over back roads, it’s amazing what you learn.

There are small surprises: Who would have guessed that Arizona has more cotton fields than Georgia? That there are big herds of buffalo in Kentucky? Or that the world’s stupidest birds are in Florida?

There are eye-opening revelations: I had no idea how many people live in mobile homes. How friendly and helpful people can be to random bike-riding strangers. Or how cold a 40-degree rainy day actually is.

You also discover new idiosyncrasies and eccentricities in people you’ve known for decades, and they all become fodder for good-natured teasing. Peter Pitsker’s dad can talk for hours about corn tassels and thinks you have to squeeze chickens to get eggs (inside joke). My sister Liz is scared to death of irrigation equipment (inside joke). My dad rode 133 miles in a day at 74 years old, on an ancient Schwinn, and he refused to wear “fancy schmancy” bike shorts because they’re too expensive (no joke—ask me for a copy of “Weapons of Ass Destruction,” the story of our ride across Minnesota).

A study found that the average adult male laughs 15 times per day. On bike trips, we laugh at least 15 times per hour—and much more at meal stops. That alone should explain why we do this.

In the end, your memories of the adventures are also transformed. Each trip involves adversity, suffering, cruel weather and exhaustion, but somehow a few weeks later all the memories are good. And the worse the adversity, the better the stories about it later on.

Q: Which state was the hardest?

A: Oregon. Peter Pitsker and I had carefully planned our route along the coast from north to south—because in August there are always strong winds from the north. But nature doesn’t always cooperate. As it turned out, the wind was 20-30 mph from the south, and it rained constantly for four days. In fact, Oregon’s weather that week made national news. A headline in USA Today was “Freak Storms Pound Oregon’s Coast.” Riding into this tempest, with stinging needles in my eyes, was the closest I’ve come to crying in my adult life.

Q: Which state was the most fun?

A: Alaska. My wife Jane and I drove from Madison, Wisconsin, to Fairbanks, crossing British Columbia and the Yukon Territory along the way. In Fairbanks we picked up my brother Dan and Peter Pitsker at the airport. Jane flew home, and the three riders then drove 400 miles north on a mostly gravel road to Dead Horse, a town at the very top of the state, on the Arctic Ocean.

From there we pedaled back to Fairbanks in small chunks. Along the way we saw herds of caribou, wild musk ox, moose, bears, foxes, eagles and the most spectacular scenery you can imagine. This was a case where the weather did cooperate. No snow. Mild winds. Even the mosquitoes were not that bad.

A: If I don’t get any reasonable offers on my bike, it may be time to consider riding the Canadian provinces. My daughter is also bugging me about biking the U.S. Territories. When I told her I had completed the 50 states and Washington, D.C., she said “What about Guam? What about Puerto Rico? What about the Virgin Islands?” Oy.

I’ll tell you the truth: As I was finishing up my final ride in Rhode Island, I wasn’t thinking about new possibilities or reminiscing about all the great times with friends and family. I just wanted a nice bowl of chowder.

Want more stories or details? Just send me an email at johnboutelle@gmail.com. Many thanks to Sagehens Peter D. Pitsker ’81, his wife Marilou Quini Pitsker ’85, his mother Polly Dubose Pitsker ’56 and his dad Peter B. Pitsker for all their help and companionship during this quest