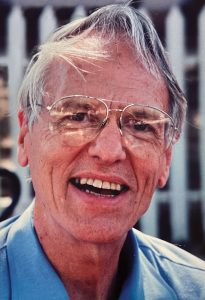 A professor at Pomona for nearly 40 years, McDonald taught government and political theory from 1952 to 1990, serving as dean of the College from 1970 to 1975. His daughter Alison McDonald ’74 recalls that during his years as dean, McDonald enjoyed working closely with President David Alexander and other administrators. But he always said that being an administrator meant “saying no” and he found it hard to say no. After five years, he returned to teaching, which he loved.

McDonald won Wig Awards for excellence in teaching—voted on by students—in very different student political eras, one amid the turmoil of 1968 and another in 1989, the year George H.W. Bush succeeded Ronald Reagan as president, even though students knew McDonald was a staunch Democrat. He is remembered each year at commencement with the Lee Cameron McDonald Prize in Political Theory, which is awarded by the Department of Politics to the best senior or junior in the major.

His talents as a dean and colleague were also greatly appreciated, remembers Emerita Professor of Politics Betsy Crighton.

“Lee was one of the first people I met when I interviewed at Pomona College in 1975. He was the dean of the College, and I was a young candidate for a faculty position. Memorably, he said almost nothing during the interview: just sat quietly and listened. That quality of attentiveness—accompanied by wisdom, good humor, and restraint—built deep trust in his leadership. He was a gentle yet powerful force in the politics department, in the College and in Claremont.”

Born in Salem, Oregon, McDonald started college at the University of Oregon but joined the Army as soon as he turned 18. The year was 1943. He spent the rest of World War II training as a fighter pilot and while stationed at Santa Ana Army Air Base in Orange County, he visited a high school friend at Pomona College. There he struck up a friendship with a student named Claire. The two wrote to each other for the duration of the war before marrying in August of 1946. McDonald joined Claire Kingman McDonald ’47 at the College and finished his degree at Pomona, where he was inducted into Phi Beta Kappa and graduated magna cum laude.

Afterward, McDonald used GI Bill benefits to earn a master’s degree in political science from UCLA and a Ph.D. from Harvard. In 1952, McDonald was offered a position teaching government at Pomona. He and Claire happily returned to Claremont, where they would spend their lives, raise their children, and remain active in the life of the College even after retirement. He was awarded an honorary doctor of laws from Pomona in 1998, and he and Claire received the Alumni Distinguished Service Award in 2009.

McDonald’s students have continued to write to him for years. As recently as August, Jon Fuller ’60 wrote to congratulate McDonald and Claire after reading about their 75th wedding anniversary in the Claremont Courier. In his letter, Fuller recalled how McDonald phoned him after his graduation to tell him and a friend about opportunities to serve as volunteer drivers at the 1960 Democratic Convention even though “you knew very well that we both then identified as Young Republicans.” Fuller called the convention “one of the most memorable experiences of my life,” recalling how he briefly sat next to Eleanor Roosevelt, who handed him a campaign souvenir as she left.

As a professor, McDonald loved wrestling with complex ideas. Among his many publications was a textbook, Western Political Theory, which was used in colleges for many years.

As members of the community, McDonald and Claire were founding members of the Claremont Presbyterian Church in the mid-1950s. In 2003, the couple moved to the Mt. San Antonio Gardens retirement community in Pomona.