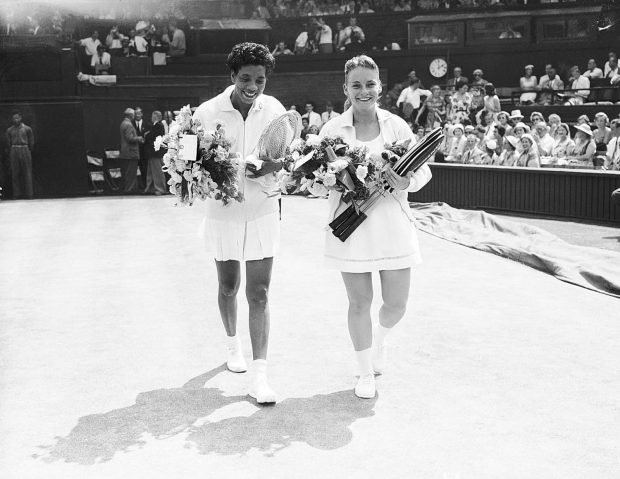 Darlene Hard ’61, winner of three major singles championships and a two-time Wimbledon finalist hailed by Billie Jean King as “a major influence on my life as an athlete, teammate and friend,” died December 2, 2021. She was 85.

Though her heyday came before the dawn of the Open Era in 1968 when professionals were first allowed to compete in the four major tennis championships known as the Grand Slam, Hard reached the pinnacle of the sport on its grandest stages.

In 1957, she fell to Althea Gibson in a historic Wimbledon final as Gibson became the first Black player to win a major tennis championship. Side by side with Gibson as Queen Elizabeth presented the trophy at Centre Court, Hard pecked Gibson on the cheek and then teamed with her to win the women’s doubles championship.

For all Hard’s success as a singles player, it was as a doubles player that she etched her name on Grand Slam trophies most often: She won 18 major doubles championships, 13 in women’s doubles and five in mixed doubles. Seven of her doubles titles came at Wimbledon, four in women’s doubles and three in mixed doubles, including two with Rod Laver, winner of 11 Grand Slam singles titles.

Inducted into the International Tennis Hall of Fame in 1973, Hard nevertheless was “the most under-publicized, underappreciated, possibly underrated tennis player of the last half-century,” a Los Angeles Times columnist lamented on her death. Hard’s accomplishments were so under-the-radar in her retirement that she worked for 45 years at USC with little fanfare as an employee in the student publications department, where her duties included designing parts of the USC yearbook El Rodeo.

Raised in Montebello, a suburb of Los Angeles, Hard played tennis with her mother on public courts as a girl but soon became so good she would take the long bus ride to the Los Angeles Tennis Club almost daily to hone her skills.

In 1957, she enrolled at Pomona College to study chemistry and biology in hopes of becoming a pediatrician. Already a touring international player, she won the inaugural U.S. collegiate singles championship in 1958 before leaving Pomona short of her degree to continue her athletic career. In 1974, Hard was inducted into the Pomona-Pitzer Athletic Hall of Fame, the first woman to be honored.

The young Pomona student made a big impression on another girl growing up on the public courts of Southern California: Billie Jean Moffitt.

Moffitt, now Billie Jean King, was a teenager in Long Beach when Hard, seven years her senior, agreed to hit with her at the request of Clyde Walker, who coached Moffitt and knew Hard from the Southern California youth circuit. By then, Hard had already played at Wimbledon. Moffitt was starstruck.

“Playing one -on-one with Darlene, who wound up in the International Tennis Hall of Fame, changed my outlook because I got my first extended taste of what it meant to play at a high level,” King wrote in her recent autobiography, All In. “The pace and depth of her shots were a revelation.”

Hard continued to practice with the young prodigy, often driving 40 miles from Pomona to pick up Moffitt at her house.

“I would be jumping out of my skin as I waited to hear her coming down 36th Street in her red Chevy convertible. It had a twin-pipe hot rod muffler that announced she was near,” wrote King, adding that she sometimes imagined she would follow Hard to Pomona.

On occasion, Hard would join the Moffitt family for a meal after the two practiced.

“It was my chance to barrage her with questions about all the things I longed to know,” King wrote. “What’s it like to play a major? Is Wimbledon as great as they say? Tell me about some of the places you’ve been!”

Years later, the two players teamed up in 1963 to help win the first Federation Cup, an event created to give women an equivalent of the Davis Cup international competition for men. The Fed Cup—renamed the Billie Jean King Cup in 2020—pits qualifying teams from 16 nations against each other. Hard and Moffitt clinched the championship with a doubles victory over Australia’s Lesley Turner and Margaret Smith, later Margaret Court, the dominating champion who won a record 24 Grand Slam singles tournaments, one more than Serena Williams has claimed.

On Twitter after Hard’s death, King recalled Hard’s influence on her life, their friendship and that Fed Cup victory.

“She was the best doubles player of her generation,” King wrote. “This was something we would both remember always.”