Laura Mays Hoopes, a former dean of the College and the Halstead-Bent Emerita Professor of Biology, died on October 24, 2021. She was 78. 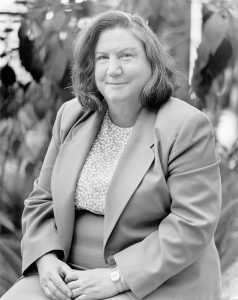 An avid advocate for women in science, Hoopes served as Pomona College’s vice president for academic affairs and dean of the College from 1993 to 1998. The first scientist and the first woman appointed to that role, Hoopes was known for her high standards, candor and generosity. Her deanship received high praise.

“If I were going to design a dean from the ground up, the qualities I’d aim for are intelligence, integrity, wit, warmth, courage and a real love of teaching and scholarship,” Peter Stanley, then the Pomona College president, wrote in Pomona College Magazine in 1998. “These are exactly the qualities that Laura Hoopes brought to Pomona’s deanship. A scientist, a musician, a dancer, an outdoorsperson and one of the best-read people I know, she has really understood the College and honored its commitment to the liberal arts.”

Prior to joining the faculty at Pomona College, Hoopes served in several roles at Occidental College, as faculty in the biology and biochemistry departments as well as associate dean of faculty. She also was president of the Council on Undergraduate Research, a professional organization that promotes quality mentored undergraduate research.

Hoopes wrote and co-authored several books and articles in the fields of genetics and molecular biology and on DNA-related issues. Many of her research papers were co-authored with her undergraduate students.

She also was known for her impact in the classroom.

Ann Zhao ’09 says she wanted to join the Hoopes lab after learning about the professor’s passion and commitment to women in science.

“As a young woman who felt insecure about science research, I needed a mentor like Dr. Hoopes,” Zhao says. “She helped me be brave and resilient—qualities that have and will continue to help me reach my goals.” Zhao says Hoopes was “a tremendous role model for women (and men!)” who dreamed of being pioneers and leaders.

Gloria Yiu ’08, a rheumatology fellow at the UCLA David Geffen School of Medicine, worked with Hoopes in her lab for four years at Pomona. More than a decade after graduating, Yiu firmly believes that the experiences she had in the lab and the encouragement of her mentor provided her with the confidence to pursue science and medicine.

Hoopes earned a bachelor’s degree in biological science from Goucher College and completed her Ph.D. in biology at Yale University. Years later, as her career in molecular gerontology career wound down, Hoopes prepared for writing in her retirement. She completed a creative writing certificate at UCLA in 2009 and an MFA in English at San Diego State in 2013. She retired from Pomona in 2015.

Hoopes published her memoir on becoming a woman scientist, Breaking through the Spiral Ceiling, in 2010 and Opening Doors: Joan Steitz and Jennifer Doudna, Two Women of the RNA World in 2019. She also published more than 20 stories and articles in magazines and newspapers.

For her contributions to her field, Hoopes received an honorary doctorate from Goucher College in 1995 and was elected a fellow by the American Association for the Advancement of Science Council. In addition, she won several writing awards, including the Jack London Award from the California Writers Club in 2013.