The Politics of Hunger

In Class with Professor Heather Williams
November 13, 2012  by Mary Marvin

In today’s class session of The Global Politics of Food and Agriculture, the discussion focuses on Joel Berg’s book, All You Can Eat, about hunger in America. The U.S. Department of Agriculture recently estimated that 48.8 million peo- ple, or about 14.5 percent of all house- holds, reported not having enough food on one or more days in the previous month. “Those numbers are sobering,” says Professor Heather Williams. “One in six households. That’s high enough for me to know someone who is hungry—someone at my church, someone who works with me, maybe someone in my neighborhood who puts on a good face but is really struggling.” 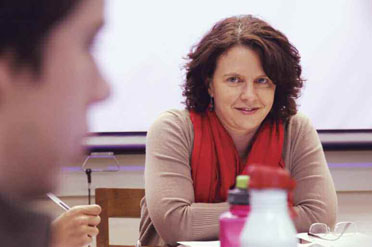 Williams: I want to talk about Berg’s policy arguments, which are controversial. He says we should consolidate all federal food programs into one efficient entity, have a universal school breakfast, reward states to reduce hunger; allow nonprofits to compete for federal funds; give recipients more choice, provide additional services such as job training. What do you think?

Allie: I’m convinced. I’ve read about these hunger statistics, and am now thinking anyone and everyone should have a breakfast program.

Williams: Berg wants breakfast available to all kids. You don’t have to apply for it or be marked as the kid who is so poor his parents can’t give him breakfast. No judgment. Breakfast food is pretty cheap. The bang for the buck is that any kid who hasn’t come to school with a meal in their belly isn’t going to be missing out on what is being taught in the morning because they’re hungry.

Maya: These policies seem like retroactive policies. If you were to pull back one more step and see why these people can’t access any types of food; why they don’t have jobs. What is the bigger picture? Every week we’ve talked about a vulnerable group of people who are abused or mistreated or lack nutrition or something else, and it all seems to come back to the general structure of capitalism.

Williams: To be fair to Berg, he’d be the first to say, “Amen, sister”— I totally agree with that. This is very much bound up with distributive politics. You need to have corporations called out on their big public Thanksgiving food drive when they’re paying their own employees below a living wage. He couldn’t agree more with you that food insecurity is bound up in complicated ways with inequality.

Monica: What I really liked about reading this book is that there is a solution, a concrete solution of what we can be doing to cut the food insecurity number to a thirtieth. Right now, when people are hungry, we’re talking about what government policies need to be fixed, because those are the mechanisms that are holding this society together. There are a lot of really plausible things that could be done.