Sociology, theatre and the law

By now, Jeanne Buckley’s sociology degree should be well worn from good use. Since graduating in 1965, she has applied her Pomona parchment to a fascinating range of work, and now the former Superior Court commissioner, mediator, social worker, mother of three and long-ago TV actress has a new role leading Pomona’s governing board. 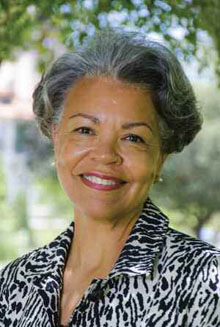 A trustee since 1999, Buckley could have reasonably expected to be winding down, pulling back a bit, as she completes the final few years of her term. Instead, the Santa Rosa, Calif., resident agreed to step up to the role of board chair.

As an undergrad, Buckley had a full plate at Pomona, too, participating in student government, choir and glee club, and helping to put on a jazz festival. Amid all the activities came the turmoil and change of the Civil Rights Era. For much of the time, she was the only Black woman attending Pomona, but she had been in the same situation in high school in Pelham, N.Y. “It was not a shock in a cultural sense,” she says. “I could navigate it.”

Post-Pomona, she found her way into social work, following her mother’s example, and was involved in the early days of Head Start. She also trained as an actress, landing a seven-episode stint on the popular primetime soap opera Peyton Place. Buckley even tried out a Broadway singing career—she had sung in church choir since childhood—that didn’t pan out.

Eventually, a decade after graduating from Pomona, she was on to law school, and the field would become her central career calling. In time, she earned a spot on the bench as a juvenile court commissioner, handling both delinquency and dependency cases—in other words, kids in trouble and parents in trouble.

In both realms, she applied her social-worker experience, nudging government agencies to en- gage struggling parents before they wound up in court and working to convince all players in the system that, “we are trying to make change in kids’ lives, rather than just state, ‘You did X; this is the consequence; go on to the next case.’”

She also handled tough family law cases that had gone to mandatory settlement conferences. “Maybe, again, because of my sociology background, I enjoyed these kinds of cases,” says Buckley, who was named Juvenile Court Judge of the Year by a statewide group of judicial peers in 1995. “They’re emotional, high anxiety cases, but I really enjoyed the assignment and I stayed in it. Most folks stay in the juvenile court maybe 2 years, 3 years. …I did it for 15—that was a long time.”

Buckley points out that the juvenile court role combined three of her key interests: law, social work, even a bit of theatre, “and that may be the reason that I enjoyed it so much.” Buckley still gets asked about the Peyton Place part, and she is quick to note: “It was a long time ago.” She adds, though, that theatre training had some application to the courtroom. “I even wore a costume,” she says, laughing about the robes. “You’re kind of up on a stage.”

In 1999, she retired from the court and, around the same time, she joined Pomona’s board. Over the years, she has served in meaty assignments such as the board’s student affairs and academic affairs committees, and also sat on a task force on diversity, and, more recently, the ad hoc committee looking into the board’s response to the worker documentation issue last year.

She still sings, too. Even amid a long career related to social work, she kept up the vocal work. Buckley performs with a small Northern California chamber group, and musical talent runs through the family: her husband Edmund Buckley ’66, a retired college administrator, plays the drums and vibraphone; son Paul ’92, writes music for television; and one of his brothers plays saxophone; the other, guitar. “When they are all home, there’s lots of music,” says Buckley.