After the death of her daughter from cancer, Karen Gerstenberger ’81 turned to providing hospitalized kids with quilts like the one that gave so much comfort to Katie.
November 13, 2012  by Sally James '77 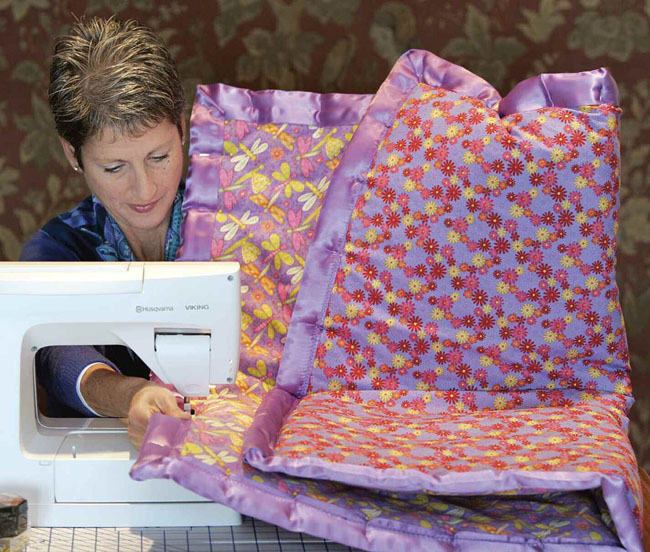 When Karen Gerstenberger ’81 holds a quilt in her hands, she sees more than red and purple and blue and more than crisscross lines of thread. She sees the patterns that grief can make on the lives of patients and families. She imagines a young face, cradling the blanket they may receive on their first day of cancer treatment at a Seattle hospital.

Her own daughter, Katie, died at the age of 12 after about 10 months of treatment for a rare cancer. Before the diagnosis, in a hurry to catch a ferry across Puget Sound to the hospital, Katie grabbed a comforter Karen had made. Through the emotional turmoil of many months, this comforter absorbed symbolism and memories. “After she died, I slept with that blanket,” says Karen, holding the blanket. One side has the cheerful images of official state flowers and the other is just a pale yellow floral. When times were tough for Katie in the hospital, she used the blanket and its state flowers as a distraction, a wrap, hiding place and a comforter.

Five years later, Karen helps others to find safe topics and comforting spaces inside of the toughest months of their lives. She runs a formal guild of volunteers who sew blankets for patients at Seattle Children’s Hospital. She hopes the quilts will be therapeutic.

Some quilts have cowboys, rocket ships and electric guitars on them. Her volunteer army includes people who find donations of fabrics and people who like to sew them together. One woman, Lucile, is 90 years old and puts together almost a whole quilt every day. The guild has given away almost 1,000 blankets at last count.

Through a special patient support system at the hospital, the blankets of many colors and designs are chosen to fit a pa- tient’s interests. Karen and her guild members do not hand them out or meet the patients, but sometimes receive delight- ful notes. Each blanket has a tag with the guild’s name and a dress. From one patient’s mother came this message:

“We had a major setback, and she had to be admitted. … She was so scared at the big bed—she [had] never slept in
one—and having to stay. When she saw the Minnie Mouse blanket she said, ‘I OK now Mama. Minnie is with me.’”

When she was paralyzed by her own grief, in the early months after Katie’s death, Karen found herself motivated to make the first blanket for another child. “Picking out the fabric and thinking about a child I did not know was very satisfying. I knew that child would have that blanket, and if the child didn’t make it, the parent would have that blanket,” she explains. It was there, at her dining room table, that the idea for the blanket guild was born. Karen studied art history at Pomona College before transferring to another college in the early 1980s. But she doesn’t feel especially artistic about these blankets.

“I sew some, but mostly what I do [for the guild] is the administrative stuff,” Karen says. Starting the guild and devoting herself to helping families “opened up a huge new adventure for me.” Katie’s cancer was a rare form known as adrenocortical carcinoma. The family’s journey with Katie included a surgery and eventually the knowledge that she could not be cured. She was in hospice care for about a month before she died in 2007.

During that time, Karen feels her family was lucky to get expert counseling and support from the hospital and health-care team. But not every family is so lucky. She has chosen public ways of sharing her family’s stories in hopes of helping to train physicians and other caregivers.

She wrote a book titled Because of Katie, and was asked to speak at various fundraisers, including one for a summer camp for children with cancer. She also created a video that will become part of staff training at Seattle Children’s Hospital.

“We don’t give young doctors enough help in understanding how to cope with death,” she says. “They need to take care of themselves.” Taking care of others includes preparing for the time when treatment may not be practical. Some states don’t have hospice care for children, for example, which Karen believes is very important. For Karen, there is a thread of writing and sharing that runs through her whole life, even though she didn’t call herself a writer until recently. She found a certain courage in telling Katie’s story, and the courage shows in how she handled an interview full of tough questions with humor and grace.

“I got in trouble [as a kid] for talking in class. Writing is really the same thing, and it is a part of me now.”

FROM BECAUSE OF KATIE:

“IN THE FIRST WEEKS AFTER KATIE’S PASSING, I slept with her comforter—the one which I had made for her. She had held onto that quilt all through her treatment and recovery; you can see it in many of our photographs.

If I needed to wash it, I had to return it to her on the same day. There are two kinds of fabric in it, and she preferred to have it on her bed with a certain side up. She loved that quilt, and used it as a real comforter all through her cancer journey: as a mask, a bathrobe, a blinder, a hiding place, a lap robe, a privacy screen. After she died, sleeping with her quilt felt like a link to her, physically.”

—Karen Gerstenberger ’81 in Because of Katie