In the Right Place

JORDAN BRYANT ’13 KNOWS JUST WHERE TO GO, WHETHER COVERING VAST SWATHS OF THE SOCCER FIELD OR FINDING HER WAY TO POMONA.
November 13, 2012  by Jeremy Kniffin 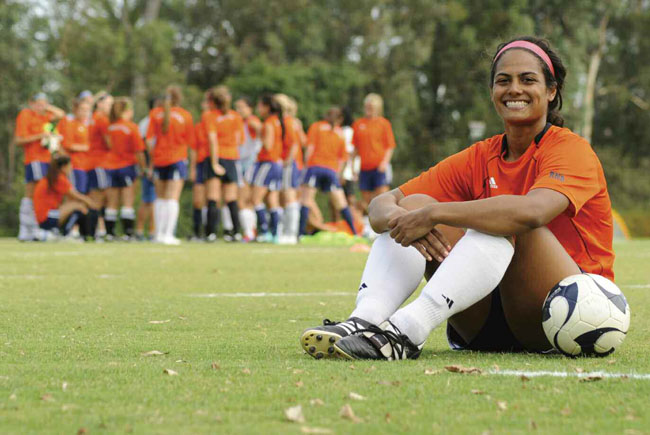 Jordan Bryant ’13 grew up playing on the competitive club soccer circuit, taking van rides all over Southern California for weekend tournaments, and shuttling back and forth to practices in Orange County every afternoon. By the time she reached Claremont High School she harbored hopes of playing Division I. It had always been her dream, in fact, to play for USC.

Bryant knew about Pomona College, but it wasn’t on her radar academically or athletically. Then she signed on for the Pomona College Academy for Youth Success (PAYS), the program in which promising high school students take classes and live on campus in preparation for college. “I absolutely fell in love with it,” she says.

That shifted her priorities. “I knew how competitive Pomona was academically, so I made the decision to quit club soccer and really focus on schoolwork,” said Bryant. “I knew I could play Division I soccer if I stayed with it, but when I decided I wanted to be here, I knew that I couldn’t afford to spend three or four hours a day going back and forth to Orange County.”

She continued to excel for Claremont High, earning team awards all four seasons (MVP as a senior, Captain’s Award as a junior, Defensive MVP as a sophomore, Rookie MVP as a freshman). She was named the Outstanding Player of the Baseline League as a senior, and her com- mitment to academics helped Bryant rank in the top 10 of her class. And so came that acceptance letter from Pomona.

Bryant stepped right into the starting lineup as a freshman. Last season, she led the Sagehens to a 10-win season (10-6-1) and their first SCIAC Tournament berth in five years. She was a first-team All- SCIAC selection and a second-team NSCAA All-Region honoree.

As a central defender, Bryant’s impact on the program is enormous, but tough to quantify. You won’t see her name in the scoring summary due to her position, but she drives the ball as hard as any player in college, on any level. She’s also a savvy defender who has that knack for being in the right place, so much so that at times the Sagehens played with only three defenders last year, relying on Bryant to cover huge amounts of territory to allow more teammates to get forward. “She always provides cover for everyone and picks up the little mistakes around her,” says Head Coach Jen Scanlon.

The one thing she most wants to add to her resume in her final season is an NCAA bid.

“In the past, people would ask us how the season was going and we’d answer in vague terms, like ‘it’s going well’ or ‘I’m enjoying it,’” says Bryant. “Now that we’ve had some success, we can actually brag about our record and can afford to set the bar a little higher. Making the NCAA’s my senior year would be a dream come true.”

It would also mean a lot to Bryant for another reason. Her father, Neil, had a huge influence on her athletic career be- fore passing away suddenly in December, right after the Christmas holiday. He was a fourth-round draft pick of the San Diego Padres, and played in both the Padres and Cubs organizations during his professional career.

“I think the biggest thing my Dad taught me was to work hard and treat competition seriously,” she says. “I like to joke around and laugh off the field, but on the field, I think I put all that aside and play with a sense of toughness and arrogance. Not in a bad way, but I think all good athletes have to believe in themselves to be successful, and I think I took that from my Dad’s personality. I always liked to say that I was a chip off the old block, and I know I’ll keep that part of him with me whenever I take the field.”