D.B. and That Number 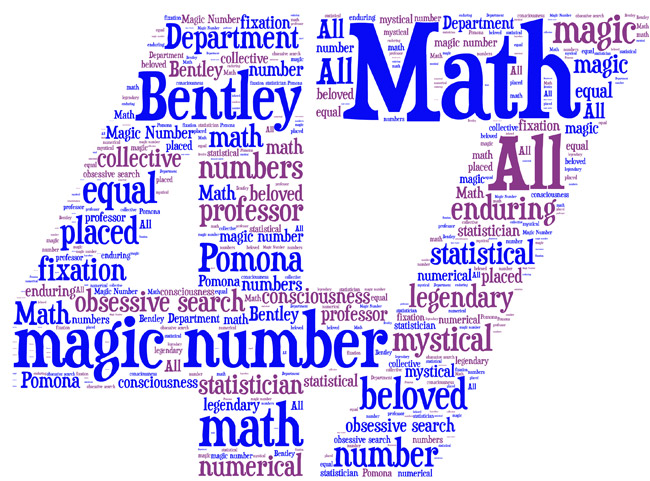 Don Bentley doesn’t want to talk about 47, the enduring numerical fixation the legendary math professor long ago placed in Pomona’s collective consciousness. It all started with a paradoxical proof Bentley put up on the chalk- board back in 1964, showing that all numbers are equal, which then morphed into all numbers equal 47—and spawned our endless, obsessive search for the magic number. But remember, Bentley doesn’t want to talk about that.

For my part, I don’t want to talk about math or statistics. So we’ve agreed to talk about people, and Bentley shows up for the interview with a banker’s box laden with old photo albums full of fresh-faced college kids burdened with ’70s sideburns. It was two of those kids in the box, Greg Johnson and John Irvine, both from the class of ’76, who piqued my curiosity about the noted statistician. In talking to them for another story, I noticed that after all these years, their beloved professor still seemed to hold a mystical, Sontag-like sway over them. So I set up an interview.

Bentley, who taught here from 1964 to 2001, turned out to be hard to pigeonhole. He started off at Stanford with plans to study religion but found firmer ground in math. In conversation, he references a slew of noted statisticians, but there also are plentiful mentions of beer and pizza. He waxes statistical at academic seminars and plays folk music on the guitar. He has fought his share of battles, calling himself a “thorn in the side” of the administration at times, and yet he also is an ordained minister.

The professor taught some of the Math Department’s toughest classes—such as linear algebra with differential equations—that weeded out some students and built confidence in those that passed. As he puts it, “The kids, if they could survive the curriculum, got out feeling wonderful about themselves.”

But Bentley hardly cut the figure of the hard-nosed mettle-tester. The emeritus professor recalls that he felt closer to the students than to his fellow faculty members. “It just is natural for me … because I’m immature maybe and I relate better to kids than I do to adults.”
He remembers how students came in and out of his family home at will, whipping up meals in the kitchen, washing their cars in the driveway. Once, he recalls, his bedroom door swung open at 5:30 a.m. as a crowd of students broke into singing “Happy Birthday.” “They had come in, they had decorated the living room, they had cooked breakfast and the dog didn’t even bark because they were just part of the family.”

That all-in-the-family attitude did create a dilemma for Bentley early on in his career. Bentley couldn’t figure out just what the students should call him. Mr. Bentley, Dr. Bentley, Professor Bentley—they all felt too stiff for a guy who considered his students to be his best friends on campus. Having them call him Don, on the other hand, didn’t feel quite right either. Somewhere along the way, “D.B.” caught on.

Me and D.B., we cover a lot of ground, a lot of memories and accomplishments. He points to his “close fellowship” with former students—and their accomplishments in fields as varied as teaching, law, medicine—as most significant to him as he looks back. “I really want to thank them for what they’ve done for me,” he says.

And then, well past an hour into our talk, Bentley lets loose a surprise. It turns out he’s not entirely done with 47. He’s says there’s more to the lore behind it, more details to clarify and lay out someday. He’d like to do a paper, with input from alumni who were there for the mathematic myth’s long-ago birth. But that’s sometime down the road, and, remember, we’re not going to talk about that now.