Come Home With Me 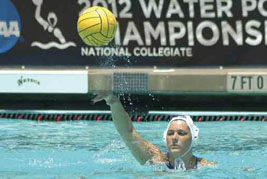 Mahalia Prater-Fahey ’15 knew that she was going to be returning home to San Diego at the end of the spring semester. Thanks to her own timely goal, she got to bring her whole team with her too. Prater-Fahey scored the game-winning goal in triple-overtime as the Sagehens earned the SCIAC championship with a 12-11 win over Redlands, earning a bid to the NCAA Tournament, hosted by San Diego State.

The Sagehens drew No. 1-ranked Stanford in the first round. Prater-Fahey added another goal in that contest, and so did Sarah Westcott ’15, who grew up in Menlo Park, Calif., a few miles from Stanford’s campus. Pomona-Pitzer lost the match 17-5, but the five goals were the most the Cardinal allowed in the entire tournament on their way to the national championship. Another consolation: A Bay Area paper noted that top-ranked Stanford would be “facing their academic equals” in the opening round.

Anders Crabo ’12 capped his career by earning All-America honors in the 3000-meter steeplechase, finishing fifth at the NCAA Division III Track and Field Championships. Crabo also made the SCIAC record books by becom- ing only the second student-athlete to win four straight individual titles in the steeplechase in over 100 years of the SCIAC championships. The first four-time steeplechase champion was Occidental’s Phil Sweeney, whose son Luke Sweeney ’13 is a star running back in Sagehen football.

Should We Bill Her For Some New Nets?

Martha Marich ’12 was named the SCIAC Women’s Lacrosse Player of the Year after end- ing her career with a remarkable 331 goals, despite missing half of her junior year with a knee injury. In one week of play, Marich led the Sagehens to four wins in five days in two cities (Claremont and Tacoma, Wash.), de- spite the team playing without any available substitutes due to injuries. In that span, Marich had 20 goals, including a game-winner with three seconds left in an 11-10 victory over Pacific (Oregon).

Sammy Chao ’14 was undefeated against Division III competition playing at No. 2 singles (15-0), despite battling a painful wrist injury for much of the year that required heavy taping before each match. Her only loss in singles all spring came against a nationally ranked Division II player from Cal State L.A. Chao’s efforts helped the Sagehens reach the NCAA Division III regional finals, and she was named to the All-SCIAC first team.

One of the most gallant performances of the spring came as Kara Wang ’13 fought for life in the NCAA West Regional finals. Late in the third set, and needing to win to keep her team’s hopes alive, Wang’s legs began severely cramping. After receiving all of the allowed medical attention, Wang fought on, serving underhanded and hitting high defensive lobs to allow herself time to get back into position and steal rest. Despite her exhaustion, Wang rallied from a 5-2 deficit and brought the match to a tiebreaker, fighting off seven match points in the process. She finally dropped the match 3-6, 7-5, 7-6 (7-2) as Claremont-Mudd- Scripps clinched the 5-3 win, but not without giving the fans a memorable display of toughness.