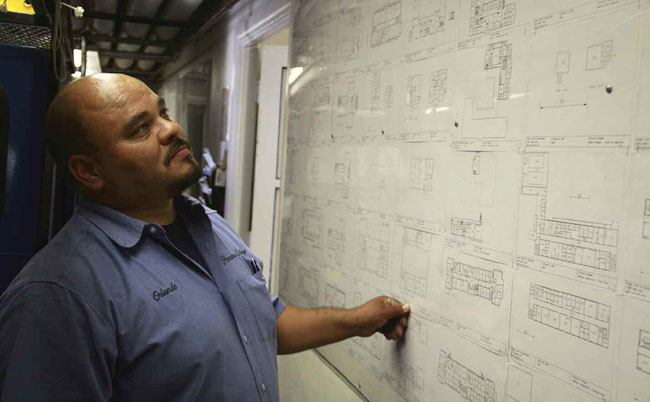 Maintenance Shop Supervisor Orlando Gonzalez is a hands-on kind of guy, working alongside his five-person crew on everything from unclogging shower drains to replacing shingles. But it’s his mind and his memory that are key to keeping the campus in tip-top shape.

While work orders come in through an online ticketing system, Gonzalez’ head holds another crucial data center. Growing up with dyslexia, he wasn’t big on writing, so he learned to remember things. “When I stroll the campus,” says Gonzalez, “there’s always flashbacks of what things need to get done, things to go back and check on.”

He knows there’s old furniture stored in such-and-such room, where the plumbing shut-offs are and where not to dig. Everybody, it seems, has his cell phone number, and weekend calls are part of the routine. “I have a lot of information about this campus,” says Gonzalez. “I’ve been in areas where people never go.”

He and his team work from the Gibson Residence Hall’s basement, where the hallway walls of their fix-it lair are lined with the detailed floor plans of campus buildings, all the better for dealing with anywhere from 20 to 40 work orders daily: “We get one done and there’s another just right after.”

Friday afternoon, when other workers might be winding down, is when those get-it-off-the-list work orders flow in fastest. Even summer is no vacation: they bring in extra workers to sweep through every dorm room and make repairs that can’t be done during school. They do, however, get together for a bonding lunchtime barbecue every few weeks.

“Our thing we have here, I think, is special,” says Mike Binney, a generalist on the crew for five years. “We get along, we have an understanding of what each other does—and respect.”

Gonzalez is always looking for a better way. For a time, the College was paying $800 a pop (ouch) to replace damaged security card readers; he worked out a method to only spend $100 to replace just a part.

He has worked at the College since 1997, first as an em- ployee of the central consortium, and then hired by Pomona. The maintenance team includes a plumber, an electrician, a boiler technician and two generalists, but nobody sticks to a single field of work—including Gonzalez. As Binney puts it: “I could be working on a sewer line and if I need help, he’ll jump down there and work with me.”

Still, Gonzalez and crew can’t do it all, not on a campus with 63 buildings, and so he also oversees the work of various contractors, from painters to gutter cleaners. They’d better do it right. If a contractor is getting called in for a repair that’s been done before, he’s going to recall it and go back to check his paper stack of work orders he keeps for the last 10 years. “We need stuff fixed,” Gonzalez says.