Can Zombies Do Math?

In defense of frivolous questions
November 13, 2012  by Gizem Karaali 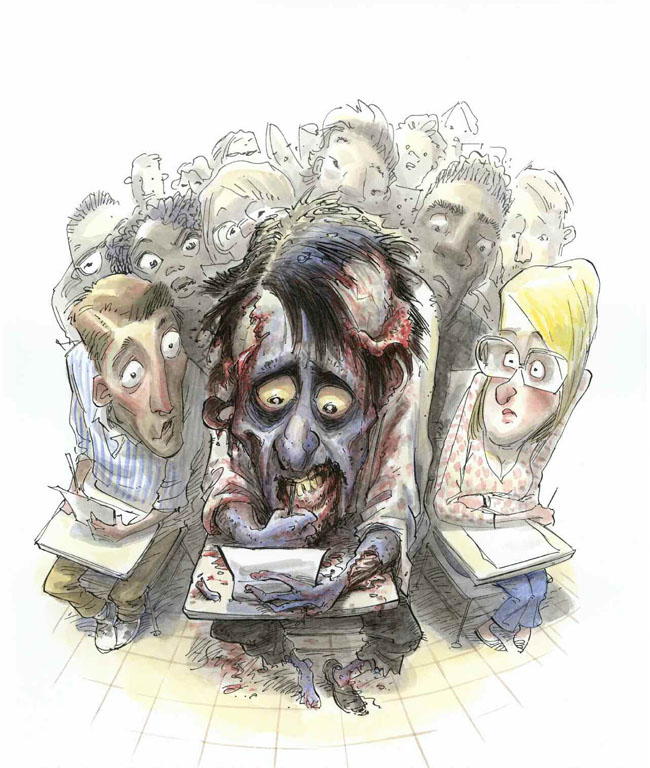 Is there any reason for today’s academic institutions to encourage the pursuit of answers to seemingly frivolous questions? The opinionated business leader who does not give a darn about your typical liberal arts classes “because they do not prepare today’s students for tomorrow’s work force” might snicker knowingly here: Have you seen some of the ridiculous titles of the courses offered by the English/literature/history/(fill in the blank) studies department at the University of So-And-So? Why should any student take “Basket-weaving in the Andes during the Peloponnesian Wars”? What would anyone gain from such an experience?

Yes, the professor will probably claim that our common global ancestry and the dependence of today’s culture on the classical morals of the era will provide much food for thought and much room for growth for the 18-year-olds who will be sitting through three hours of ancient basket-weaving lectures a week. “Yeah, yeah, yeah,” the industrialist will say with a dismissive wave.

But if our impeccably dressed friend is honest, perhaps he will admit that what he is demanding from college educators is to create for him an army of docile and respectful workers, ones who come out of the factory of higher education in time to be immediately recruited by the factory that is the job market. Workers who are faceless in the midst of a sea of millions like themselves, workers who are cheap and obedient and dispensable. Workers who should NOT learn to ask questions. And especially stupid or frivolous questions—those are the worst!

In these kinds of debates our friend will often find support amidst the faculty teaching in the STEM (science, technology, engineering and mathematics) disciplines. It is not tough to find an engineering professor who smirks at the titles of courses offered by his humanities colleagues, nor is it uncommon for faculty in the pure science disciplines to consider themselves at the core of the curriculum and the foundation of a real education.

My own disciplinary colleagues, the mathematicians, are not completely innocent either. True, many of us view mathematics as a creative art, but many of us also have the illusion that mathe- matics is the only path to universal truth. (Now what does that even mean?)

Last year I took a different path. I volunteered to teach a first- year seminar. A strange path indeed for the rational, linear-think- ing mathematician who had taken a whopping two courses in humanities during her own undergraduate studies. The first-year seminar series at Pomona is a perfect foundation for a deep and engaged liberal arts education. The courses are writing-intensive; most are discussion-oriented seminars. Students are expected to engage with analytic readings, sophisticated writing experiments, creative arts and aesthetic sentiments. That’s absolutely mar-velous for a humanities scholar. How about me? What would I center my course around?

I followed the example of my most daring colleagues and chose a completely frivolous question to guide the semester’s activities: Can Zombies Do Math? The inclusion of zombies was a pragmatic move on my part. The Humans vs. Zombies game has been a hit on my campus for years now, so I knew that students would find the bloody stench and the gory manifestations of the living dead irresistibly appealing. However the central idea of the course had been simmering in my mind for several years before I even heard of the game.

Mathematics is undeniably a human endeavor, even though we mathematicians unfortunately do a poor job of sharing this fact with the rest of society. Mathematical practice gracefully integrates a certain comfort with ambiguity and a deep desire for elegant simplicity amidst complex patterns. I wanted to create a course where students, fresh out of the factory line that is the K–12 education system, would engage with ideas and experiences about the true nature of mathematics.

Throughout the course, my students and I read books, articles, essays, short stories and poems. We watched movies about zombies and mathematicians. Students reviewed novels they were individually assigned, and interviewed mathematicians to discover what motivated them. The main essays of the course focused on the two serious questions that were hidden under my frivolous one: What does it mean to be human? What is the true nature of mathematics? The culminating writing assignment was a narrative statement asking students to come back to the course title ques- tion and resolve for themselves the question that began the whole trip.

On the last class discussion of the semester, Kimberley, the student discussion leader, asked her classmates:

“Now that the course is coming to a close, how would you answer the question “Can zombies do math?” Would you answer it any differently than you would have at the beginning of the semester?”

There was consensus around the room that most of students had not changed their gut response to the question, but now they had a more crisp understanding of the path that led them to that answer. Along the way they tackled questions such as what makes us human, what we ostracize as subhuman, other, mon- strous, and what, if anything, is a soul. They also had the chance to explore ambiguous, wild patterns and strange, undetermined paths in the mathematical universe. But I think what mattered most in the end was summarized best by Kenny’s response to Kimberley’s question:

“Does the purple hippo that I just conceived like to brush his teeth? It depends.”

Yes, the course was centered around a frivolous question, but the point my students and I left the semester with was deep and nuanced: that the answer to any question we pose depends on what our basic assumptions are, what we are already inherently implying with our choice of words, tone of voice and turn of phrase, and what lies inside us as individuals who are reflecting over the question. The minor issue about what makes us human was, of course, a side attraction, which will hopefully allow these keen students of the liberal arts to proceed through the rest of their voyage in college with some carefully examined and deeply felt sentiments about their place in this universe.

Gizem Karaali is an associate professor of mathematics at Pomona College. This is an abridged and adapted version of a piece that originally appeared in Inside Higher Education.