The [Basketball] World According to Voigt

Will Voigt ’98 has built a career on a love of basketball and a willingness to go wherever it takes him.
March 23, 2021  by Michelle Hiskey

Click click click. Videotape is the focus of Will Voigt’s first job after his 1998 Pomona graduation—collecting it and editing it for the San Antonio Spurs. He is a peon in the kingdom of professional basketball coaching, his only power the dicing and splicing of game tape. Start, stop, rewind, pause, fast-forward—the VCR controls are squares, triangles and hash marks, some of the same symbols coaches use to communicate basketball plays.

That basic code of basketball is something Voigt knows well from competing for his tiny Vermont high school three hours north of the gym where James Naismith invented the sport with peach baskets as goals. In the NBA org chart, the assistant video coordinator is barely listed, but in Voigt’s case, it gives him a seat on the bench where Pomona-grown head coach Gregg Popovich and assistant Mike Budenholzer ’92 held court.

The Spurs gig didn’t turn into a trailer for his own version of Hoosiers. He didn’t move up and around the NBA. Instead, Voigt’s own education and mastery of basketball coaching would be a peculiar string he kept unspooling, to Norway, back to Vermont, California, China, Angola, and even the 2016 Rio Olympics with the Nigerian national team. He’s bounced from continent to continent, most recently landing in Germany at the height of the pandemic to coach the Telekom Baskets Bonn in the Basketball Bundesliga.

If you lose track of where in the world Will Voigt is coaching, you can usually find him on YouTube, sharing the artful ways basketball is played far from the NBA. Now he’s starring in videos instead of taping others, and friends and strangers are watching, backing up, clipping, studying. Trying to get an edge from Will Voigt.

“Will is a little wacky, and his story has played out that way,” said Budenholzer, now head coach of the NBA’s Milwaukee Bucks. “In San Antonio, he was there anytime for anyone who needed anything, because everyone mattered, from the bottom of the ladder as a video guy to the top. Everyone contributes whatever is needed to the team’s growth. Young coaches can be fascinated with the NBA, but there are only so many teams and jobs, so you have to be willing to go anywhere. Will is the greatest example of taking that advice to new places that are almost unheard of in the NBA.”

Everyone matters in unincorporated Cabot, Vermont.

When Voigt was 5, voters in the city of Burlington, 60 miles west, elected a new mayor named Bernie Sanders. The most famous export is the cows’ milk that’s used to make Cabot cheese, which comes from a local co-op. In 2019, the population was 189. “Indomitable people,” Calvin Coolidge said of Vermonters, “who almost beggared themselves to serve others.”

Voigt practiced shooting to a goal in his family’s barn, where birds would build nests between the net and backboard when Voigt went into soccer and baseball seasons. Every athlete who could play, did. Voigt, a point guard, led his team through state playoffs against Vermont’s smallest schools and graduated valedictorian in a class of 18. He also played piano because his mother, Ellen, who had served as Vermont’s state poet, and his dad, Francis, who had started the New England Culinary Institute, insisted he do something besides sports. When it came to his college, they insisted on strong liberal arts. “They would not budge,” Voigt recalls.

Due east, over the White Mountains and into Maine, is the  town that Bill Swartz had left to become head soccer coach at Pomona-Pitzer. When Voigt reached out, Swartz recalled thinking, “I can definitely take a chance on this guy. I’ve always thought that players from those New England states had qualities that were difficult to put on paper. Will had a good sense of who he was and how he fit in.”

With Voigt as a backup forward on the soccer team, the Sagehens won the 1996 Southern California Intercollegiate Athletic Conference. With less fanfare but more foreshadowing, Voigt performed in a mock Congress with Claremont McKenna students, playing independent-minded Vermont Senator Jim Jeffords. “Will was a swing vote, in the middle of everything, talking to both sides and paying attention to everything,” noted Professor of Politics David Menefee-Libey. “It makes sense that he’d become a coach.” Voigt didn’t see it then. When he graduated in 1998 in political science, he expected to go to law school and become a sports agent. Basketball was calling. 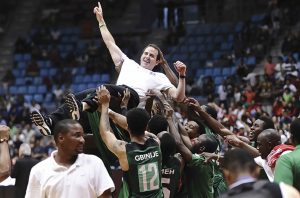 Earlier in the century, the sunny beaches of Los Angeles had inspired tire retreader William J. Voit to invent an inflatable rubber ball. He vulcanized it to create the modern basketball. The summer after college, Will Voigt bounced into the Long Beach State Pyramid for the NBA free agent league. He hoped to hang with agents, and one asked Voigt to coach a team led by Duke’s Ricky Price. “The players were trying to shine and show teams what they could do, and Will took it so seriously,” Price said. “He even put in a defense—for a summer league? I thought he was auditioning for a coaching spot for real.” This—plus an internship with the Los Angeles Clippers and Pomona ties—helped him get to the San Antonio Spurs’ sideline.

“Good or bad, I have had a confidence in myself that is generally unjustified,” Voigt said. “Like I have never been afraid of the moment. That helped me in San Antonio, being able to keep it real. I could be myself. If I stopped and thought about being a small-time Vermont kid on the NBA court with one of the best coaches in the history of the game, I would be paralyzed.”

Voigt had ventured into college basketball coaching when a voice from his past opened an unexpected door. His high school coach Steve Pratt, in Chicago to train players for college and the NBA draft, was asked if he knew anyone who could coach a pro team in Norway immediately. Its American coach had decided not to show. “I have the guy,” Pratt said.

To say that Voigt, then 27, brought passion to the Ulriken Eagles is incomplete. He also loves arguing. In Oslo, the Eagles were down 26 points to the league’s best team when Voigt got ejected right before halftime. Pratt was visiting, and heard Voigt’s last words to his team: “Screw this! You have nothing to lose. Just go beat their ass!” And they did. 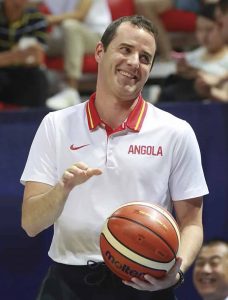 A vote brought Voigt back to Vermont, when he was elected coach of the Vermont Frost Heaves, a startup in the American Basketball Association. Yes, elected by Vermonters given ballots by team owner and Sports Illustrated writer Alexander Wolff. “Wouldn’t it be great to have someone who was deep into hoop and who can see the larger world out there?” Wolff wondered. The Frost Heaves won two straight ABA championships, which had only been done before once, by the Indiana Pacers.

“My first impression of Will? I got a knock on my door at the Ho Hum Motel in Burlington, and God knows who was going to show up,” said John Bryant, a signee who had just flown in from China, now an assistant coach with the Chicago Bulls. “Will didn’t even look like a player much less a coach. He has that baby face. He couldn’t be the right guy, but he was.” Voigt moved on to five years with the Bakersfield Jam in the NBA D-League, where he left a memorable impression on his team’s Nigerian-American players. When the Nigeria Basketball Federation needed a coach, it picked Voigt, who had just wrapped a gig with the Shanxi Dragons of the Chinese Basketball Association. Voigt coached the Nigerians to the African title and one of only a dozen spots in the 2016 Rio Olympics. Despite winning only one game in Rio, Voigt had sealed his reputation, and the next team to sign him was Nigeria’s fierce rival Angola. In Luanda in 2018, Angola was practicing in the Estadio da Cidadela when a large light fixture fell from the ceiling, barely missing Voigt and nearby players. “At that stage, I had been in Africa so long, that didn’t faze me as much as it should have,” Voigt said.

He tweeted the near-miss with video footage. Just like in San Antonio, the cameras were rolling in Luanda, too. But now Voigt was becoming a more seasoned coach in a setting that was less star-driven, more Cabot-like. Even the international basketball court, at 28 by 15 meters, is slightly smaller. “More ball movement, more people movement,” said Budenholzer. “We all try to do similar things as coaches, but the international coaches and teams buy into it more, and when everybody is touching the ball and moving, it is a more inclusive way of playing.”

African players taught Voigt an intuitive defense that fascinated him. Defending players typically must react in seamless actions when the other team drives to the basket: cover their player, help defend against the ballhandler, rotate to help other defenders, and then recover to their assigned player. The Africans simplified this. When the ballhandler beat the primary defender, the next defender rotated into that gap, leaving a gap that the next defender filled.

Voigt calls this defense the peel switch. “Most of the teams I coach have to be different to find a competitive edge, so when I saw this, I knew it was something different that would help us play to our strengths,” Voigt said. “Teams that do this are really good at communicating, and I liked exploring something new like this rather than doing what we always do.”

Last year, when the pandemic created a gap in his chances to coach, Voigt did a peel switch of his own, turning to teaching this and other basketball strategies online until he got the call from Telekom Baskets Bonn.

Voigt is now 44, and when he looks back on his vagabond career—the video highlights, if you will—Pomona’s liberal arts training shows in his open-mindedness, critical thinking, engagement in the larger world and appreciation for multiple perspectives. He left campus at the end of one century to embrace a rapidly changing world while hopscotching between rectangular hardwood landing pads. He speaks six languages.

“If you look at all the places I’ve been, it’s hard to imagine any plan that would have taken me on that route,” he said. “I think everyone aspires to be and do what they can at the highest level, and for me that was to be an NBA coach one day. But when you get locked into that, as soon as you go somewhere, you are trying to  get somewhere else. You won’t enjoy yourself, and you won’t give everything you have. I’ve embraced jumping on opportunities when they’ve presented themselves and doing it ‘all in’ and seeing what that leads to next.”

The Voigt video is still rolling, so stay tuned for the next episodes, wherever they’ll be filmed.