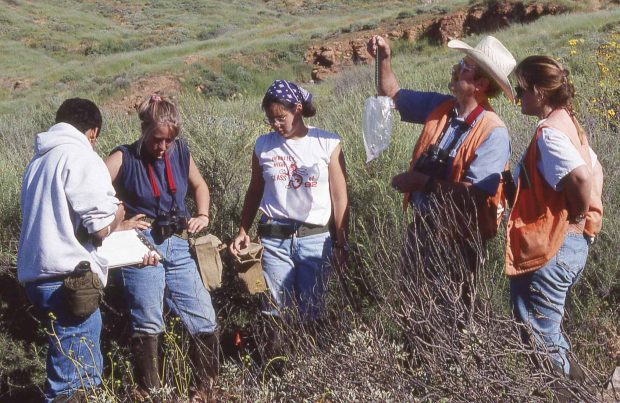 We would like to recognize the legacy of Emeritus Professor William “Bill” Wirtz, who recently passed away in Norco, California, at 83 years old. Bill provided invaluable experience-based learning to generations of Pomona College students that brought the natural world into focus for all and inspired many of us to continue on in biology and ecology careers.

Many of us fondly remember Bill’s ecology course that included overnight trips to the Granite Mountains (to study desert ecosystems) and the Pitt Ranch (oak woodland/grasslands) and day trips to the San Gabriel Mountains (chaparral and coastal sage scrub communities). Bill was in his element with students in the field. He had a seemingly infinite knowledge of the natural history of mammals, birds, reptiles and plants and how they all fit together in an ecological community. Bill’s infectious enthusiasm and passion for biology made us eager to learn more. His vertebrate biology course featured infamous exams that required students to identify the bones of elephants, seals, snakes and birds and discuss their evolution across taxonomic groups.

Some of us were lucky enough to work for Bill as teaching assistants in the laboratory or as research assistants in the field. These experiences did two things simultaneously. First, Bill taught us how to “do” science, which formed our foundation in biological theories and methods. Second, his guidance inspired us to ask our own questions about nature and humanity’s relationship with it. Bill’s kind and patient mentorship motivated many of us to pursue careers as academics and practitioners, passing on his legacy to new generations.

Bill formed deep friendships with many students that lasted a lifetime. He sometimes referred to us as his academic “kids.” When we checked in with stories from our professional lives, we could feel his pride in our accomplishments. We also knew we could turn to Bill anytime for mentorship and advice.

Bill was a treasured friend and an engaged community member, dedicating his time to a number of endeavors, including fire rescue, the Audubon Society and animal welfare through the Humane Society. His endless passion for biology continues to live on in the work of his students. Bill will be sorely missed and fondly remembered.

A memory of
Ved Mehta

One of my paying jobs during my first year, 1952–53, was serving as Ved Mehta’s reader in biology, a course in which I was also a student. Three nights a week, I sat with him and read the text and tried to explain the diagrams. The diagrams were difficult for us, as Ved was blind. One Sunday night, the devil was in me, and I suggested that instead of reading biology, we walk into town for a coffee at the only place open on a Sunday night, the Sugar Bowl. We did so, and for that night biology took the hindmost.

Perhaps 20 years later, I was leaving a club on W. 43rd St. in New York after lunch just as Ved was leaving his club next door. To my astonishment, when I spoke to him he recognized my voice as the biology reader. We talked for a few minutes, and then went our ways.

At our 50th reunion in 2006, discovering that we were going to cross campus to another event, Ved suggested we walk together, and I remembered his preference for subtle guidance by a touch to his elbows.

It became clear that he retained a strong mental map of the campus as it was, for he paused, concerned, before a place at which  a building in our time now no longer existed   (Harwood Hall, a World War II wood dungeon, for example) and had no idea of what lay beyond 6th Street.

During our stroll, I decided to unburden myself of the guilt I had sometimes felt for taking Ved away from his studies on that Sunday night. He said, with great sincerity, “Oh no, Doug, I will always remember it. It was the first time anyone had suggested that they wanted to do something with me.”

For the record, I must have been an excellent teacher, for Ved always scored above me on biology exams.