Gardener of the Sea

Gator Halpern ’12 and Coral Vita are playing a major role in expanding coral farming and reef restoration efforts in the face of global warming.
March 23, 2021  by Ramin Skibba 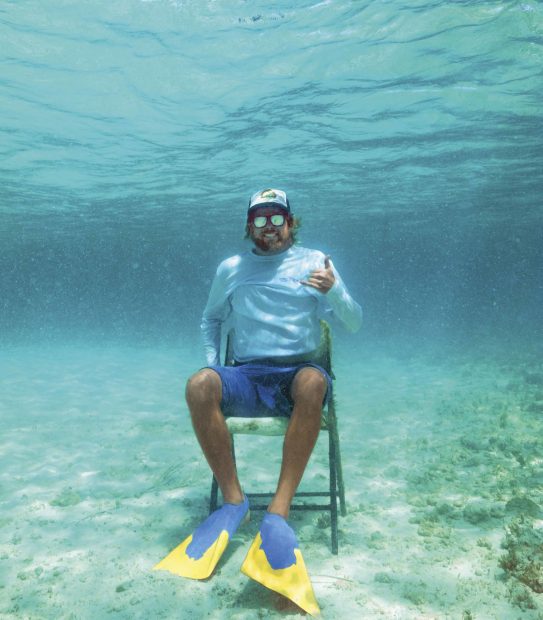 For years Gator Halpern ’12 studied ecology, biology and environmental management during our era of worsening climate change. His research took him to the Andes, the Amazon and elsewhere as he witnessed deforestation, overfishing and bleaching corals. But his work wasn’t yet having quite the impact he wanted.

“I felt like I was almost helping write the obituary of the world without actually getting out there on the front lines and doing something about it,” Halpern said. His passion motivated him and his colleague, Sam Teicher, to found Coral Vita, a company dedicated to coral farming and reef restoration. After having seen firsthand the declining health of coral reefs, he decided that “working with these ecosystems that are, really, canaries in the coal mine when it comes to climate change—the first ecosystems to collapse—is a great place to try to make a difference.”

The United Nations, government agencies and nonprofit groups like the Coral Reef  Alliance and the Reef Ball Foundation have been working for years to raise attention and  expand efforts to protect coral reefs. Halpern and Teicher started Coral Vita in 2015 in an attempt to act more quickly than other organizations, if possible, to secure funding, cultivate resilient corals and return them to reefs to help them recover and survive as ocean waters continue to warm and become more acidic. Halpern and his team currently work at Grand Bahama Island, just about 100 miles east of Miami, and his vision is to scale up their efforts to reefs elsewhere, too.

Corals are both tough creatures and the scaffolding for the homes of numerous other animals. Stony corals are like slowly growing skeletons, hosting thousands of microscopic algae in mouthlike openings on every polyp, which photosynthesize during the day and  provide energy to the coral. Coral reefs, the animal forests of the seafloor, can stretch for hundreds of miles or more, and they surround most of the Bahama islands where Halpern works. They teem with thousands of fish species, clams, lobsters, sea turtles and myriad other organisms—25% of all marine life—that enjoy the ample shelter and sources of food, whether they call the reefs home or are just passing by. All this makes coral reefs important thriving ecosystems during normal times.

Sometimes water as much as 2 degrees Celsius above average will wash over a reef—or worse, linger in the area for a while, making the corals overheat. Current climate projections predict that the pace of warming will accelerate, said Stuart Sandin, a marine biologist at the Scripps Institution of Oceanography in La Jolla, California. “What we’re seeing is that these hot water events, often associated with El Niño patterns, are more frequent and less predictable.” 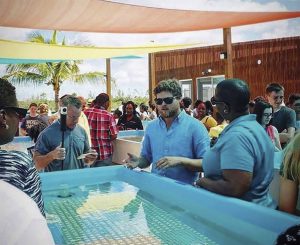 Continually warming waters will threaten coral reefs on a massive scale in the coming decades, and after that, climate change will gradually acidify the oceans as well, eventually making it harder for corals to make their durable skeletons. “We’re already having massive coral reef loss right now, and it’s only projected to get worse,” said Andréa Grottoli, an ocean scientist at Ohio State University in Columbus. If we continue on our climate trajectory, up to 90% of coral reefs could be lost by 2050, according to the Intergovernmental Panel on Climate Change, and it’s not clear whether there will be enough coral surviving to maintain all those diverse ecosystems.

When seawater surrounding a reef warms by just 1 degree Celsius for 10 days or longer, the corals’ health takes a hit. They eject their little algae as their carefully balanced symbiosis breaks down, halting their key energy source. Corals then hang on by depending on their fat reserves and snagging microscopic plankton for food. One can see through to their white skeleton at this point, in what’s called coral bleaching, which isn’t by itself a death sentence, Grottoli said. But if the waters don’t cool soon, within months the corals begin dying off and their ecosystems collapse.

If corals survive the bleaching period, it can take years, even decades, for them to make a full recovery, she said. Unfortunately, Grottoli and other scientists foresee a near future with bleaching events happening annually, with the cumulative effect killing off more and more sections of coral reefs. The reefs won’t grow back to their former splendor, or even survive this century at all, unless something major changes.

That’s where Halpern and Coral Vita come in. They’re farming a  variety of healthy and resilient corals and returning them to the sea, helping to revive dying reefs so that as many can survive this warm century as possible.

Halpern and Teicher have launched what they call the world’s first commercial land-based coral farm. For their pilot project, they’ve partnered with the Grand Bahama Development Corporation and Grand Bahama Port Authority, and they’re working with scientists at the National Oceanic and Atmospheric Administration, the Mote Marine Lab in Florida and the Hawai‘i Institute of Marine Biology,  as well as university researchers. Their main coral farm involves 30 outdoor water tanks the size of a dining room table, about four by eight feet. They conveniently built the coral farm next to a canal, so they can pump fresh seawater directly into the tanks. They’ve collected healthy fragments of reef, including brain coral, star coral, pillar coral and other species, and they farm them in the tanks for six to  18 months before returning them to the wild. 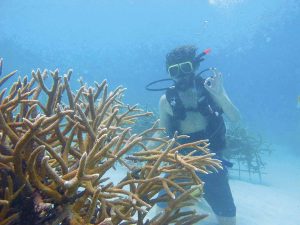 Halpern and his team’s coral farming involves taking advantage of two important techniques. First, they perform what’s called micro-fragmentation, splitting up coral colonies into little pieces that soon fuse back together, dramatically speeding up coral growth rates by up to 50 times, so that they grow rapidly within months, rather than in decades, as they’d grow in nature. A coral colony grows asexually by cloning itself into hundreds or thousands of connected animals. For the entire time Halpern and his colleagues have a coral at their farm, they break it apart, fuse it back together, and repeat, keeping it in that high-growth state. If the corals come from the same original parent colony, they quickly heal from the procedure and grow normally afterward. This permits the Coral Vita team to select the very slow-growing corals that make up the foundation of the reef, more of which are needed for reef restoraton. Without micro-fragmentation, the team would be limited—as other groups have been—to only the fastest-growing corals.

Halpern and Teicher’s second technique, “assisted evolution,” is what it sounds like. They gradually crank up the heat and acidity in their tanks to see which kinds of corals can adapt to the rising sea temperatures and acidifying conditions expected to be common in 2050 or further in the future. They take the strongest corals of the batch and use them to seed the next batch, and then repeat the process. “Some corals do work better than others, but all species have the ability to adapt, and they all have a range of tolerance that they’re able to survive in. We can work with any species to increase that range and make them more resilient to climate change,” he said.

For the final step, Halpern and his team just have to transplant the healthy corals to the reef when they’re ready. They scuba dive down and graft the corals to the existing, degraded reef using nothing but underwater drills and glue. Once the corals are established back on the reef, the reef quickly comes back to life. “Fish immediately sense the coral there and start moving back among the branches. It’s pretty magical,” Halpern said. His hope is that the most resilient corals  become a significant part of the reef, which then adapts naturally to climate-influenced conditions.

To realize their goals, Halpern, Teicher and their nine employees, four of whom are Bahamian, have many challenges to overcome. The first comes from events caused by climate change itself, such as Hurricane Dorian in September 2019, which may have intensified because of warm air and water vapor in the atmosphere. Dorian battered the Bahamas with 185-mile-per-hour winds and increased rainfall, though the storm surge’s damage might have been worse had the surrounding coral reefs not provided a natural seawall. As it wreaked havoc throughout the islands, the hurricane destroyed Coral Vita’s farm, and Halpern and his team are still rebuilding today.

Another challenge could arise if assisted evolution turns out to be more complicated than expected. There’s no guarantee that picking resilient corals for the future will work as planned.

“Whatever is surviving and growing well in your nursery might not be the one growing well in the reef. There is no consistent winner” among the corals, said Mikhail Matz, a biologist at the University of Texas at Austin. One type of coral might fare well one year and then poorly the next. That’s partly because future conditions might require not only heat tolerance, but also the ability to live well with new organisms, tolerate disease and recover from storms like Dorian, he said. But Halpern isn’t putting all his eggs in one basket, as Coral Vita grows at least 20 different kinds of corals.

Coral Vita and other coral farming efforts currently seem small compared to the size of the global problem, but that could change. While coral farms can revitalize a valuable local reef here and protect  a fish spawning site there, they need to be scaled up. Halpern plans   to eventually have at least 100 tanks at the Grand Bahama farm, and eventually his vision is to expand to other reefs beyond the Bahamas. He also takes a community-based approach, training local divers and staff to manage the farm, an approach the team could apply elsewhere.

Most scientists agree that projects like Coral Vita’s can play a part in our society’s effort to respond to climate change. “There’s certainly a role for coral farming to complement other efforts,” Sandin said. “If we use all the tools we have, we have an opportunity to make a real difference.”