World at her Feet

As a high-school athlete in Singapore, Annie Lydens ’13 loved to run along the forested nature trails near MacRitchie Reservoir at the center of the urban island nation. The only drawback: monkeys. The place is full of them, and if the monkey-mobs think you are carrying food, “they’ll chase you and jump on your back. You have to be on your guard.”

There are no monkeys on her back here in Claremont: This fall, she won four straight individual races by wide margins. Lydens started the streak by winning the Pomona-Pitzer Invitational on Oct. 1 by nine seconds, the SCIAC Multi-Duals by 29 seconds, the SCIAC Championship by 25 seconds and finally the NCAA West Regionals by seven seconds. 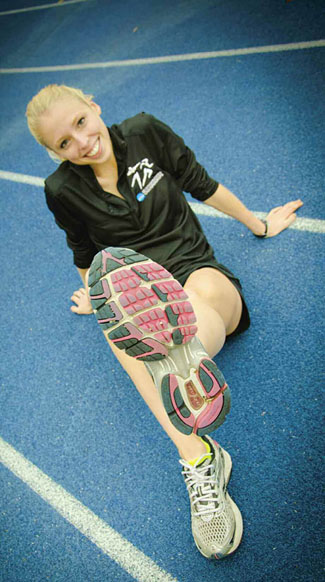 In November, she went on to the NCAA Division III Women’s Cross Country National Championships in Oshkosh, Wis. Her personal-best time of 21:02 earned her third place, the highest finish in Pomona-Pitzer cross country history, whether men’s orwomen’s. Along the way, Lydens earned the SCIAC Athlete of the Year and the NCAA West Region Runner of the Year honors.

Lydens has been on the move for much of her life. Born in Japan and raised in Singapore, Lydens has visited a different country every year since age 13. She lived with a Maori tribe in New Zealand, taught in a Bhutan village, sailed around Thailand and worked for a nonprofit in Cambodia. Attending Pomona is her first time living in the U.S.

Fittingly, she is interested in pursuing a career in international diplomacy. This past summer, she was an intern at NATO headquarters in Brussels, taking press inquiries, posting to social media and working long hours for meetings of NATO defense ministers. “Those days, I don’t think I sat down more than 10 minutes, running back and forth, fielding calls,” says Lydens, a philosophy, politics and economics (PPE) major.

Back on the running track, her athletic accomplishments are made all the more impressive by the fact that Lydens is relatively new to distance running. Already a soccer player at her Singapore high school, Lydens tried out running at the suggestion of the track coach, and she went on to compete in a variety of races, helping her team rack up points at meets.

It wasn’t until she arrived at Pomona that she began running cross country, just to stay in shape for track season, and finished fifth on the team at the UC Riverside Invitational before shutting down for the fall with a foot injury. In the spring of freshman year, she settled on the 800 meters (leaving the distance events to senior All-American Alicia Freese ’10), finishing fifth in the SCIAC Championships.

But in her sophomore year, with Freese serving as a coach and helping to push her along in practice, she found her permanent niche in the distance events.

The pair became close friends, and started running together on weekends. Soon Lydens broke Freese’s school record as fastest woman in the 6K. Now she has her sights set on breaking records in the 5K and 1500 meters. “I’m a really competitive person so I love racing,” she says. “I just get a thrill out of chasing people down.”