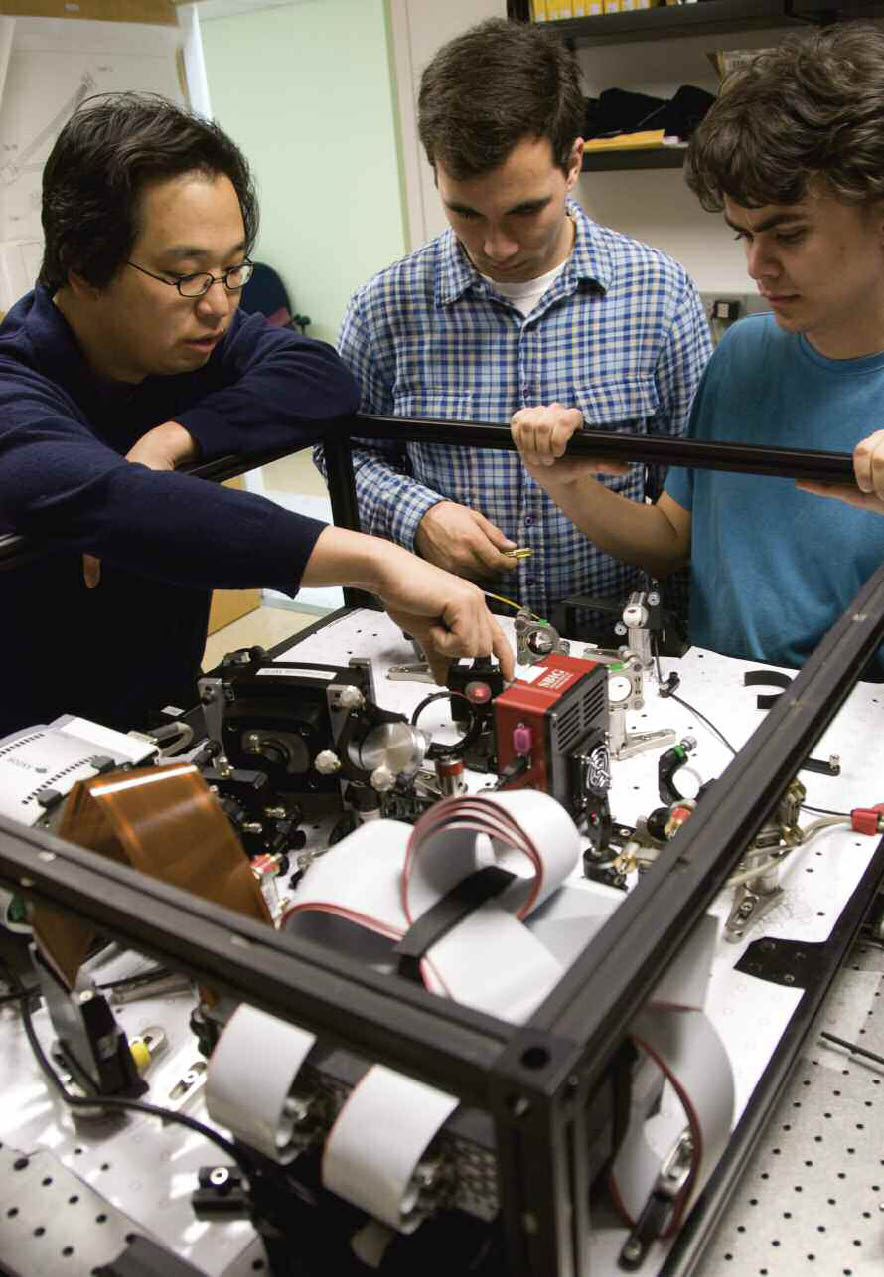 Professor Choi with Will Morrison '12 and Daniel Contreras '13

Tucked away in the basement of the Andrew Science Building, Room 58 carries a light-hearted vibe as students trickle in after lunch, chatting and cracking jokes as music blares in the background.

Then, back to work. Alongside Astrophysics Professor Philip Choi, the students turn to the tiny instruments that are deliberately arranged on a large table in the center of the astrophysics lab. This has been their calling for the past two years.

In January 2010, Choi and his research team received a four-year, $637,138 National Science Foundation grant to build a groundbreaking adaptive optics system for the College’s Table Mountain Observatory one-meter telescope in Wrightwood, about a 45-minute drive from Claremont in the San Gabriel Mountains. The optics will correct for the distortion in the atmosphere that is manifested in the twinkle of stars. The result? Image quality rivaling that produced by the Hubble Space Telescope.

Choi explains that the turbulence in the atmosphere—a result of clashes in air density and temperature—causes the distortion of stars, planets and other astronomical bodies viewed through telescopes. This is analogous to ripples in a swimming pool blurring the image of a penny at the bottom of the pool. Adaptive optics systems solve this problem with deformable mirrors that bend beams of light back on track based on how much distortion has altered their paths.

First, wave front sensors measure the distortion of light from a reference star. The sensors then send signals via high-powered computers to flexible mirrors that compensate for the distortion by deforming ever so slightly, as though there are little fingers pushing and pulling them from behind. This must occur every 1,000th of a second to keep up with the ever-changing atmosphere. If the system has done its job, stars that are blurred due to the turbulent atmosphere instantly come to a sharp focus, with a factor of 10 improvement in image resolution.

The adaptive optics system is set to be integrated into the Table Mountain telescope by the end of 2013. Although the opacity of the atmosphere in some wavelengths will prevent adaptive optics telescopes from rendering space telescopes like the Hubble obsolete, Choi says that adaptive optics will allow scientists to “tailor the space missions to complement what we’re doing from the ground.”

Interestingly enough, Dr. Choi went into his undergraduate years planning on majoring in philosophy. A poor freshman enrollment time locked him out of philosophy seminars and opened up a slot for Astronomy 101. He came to realize that the natural sciences in general and astrophysics in particular would be the perfect avenue to allow him to continue exploring “the big questions…of why we’re here, how we got here, where we’re going.”

Choi’s research team includes Pomona Astronomy Professor Bryan Penprase, along with additional co-investigators and collaborators from Caltech, Harvey Mudd and Sonoma State. Add to that a crew of Pomona undergrads; among the most recent are Daniel Contreras ’13, Claire Dickey ’14, Anne Hedlund ’14, Lorcan McGonigle ’13, Will Morrison ’12 and Alex Rudy ’11.

Choi enjoys doing research with undergraduate students because they are “not jaded. They’re doing it for the enjoyment and for the love of it. … To be in that exploratory mode is the most exciting part of science, I think. And so to be working with students who are all in that mode is inspiring.”

For their part, the students like working on so many different aspects of the project, from software and programming to optical alignment and machining. Contreras notes the feeling of being “in the lab working on the code behind our instrument and just seeing everything work and everything just fit together so nicely. It’s really awesome.”

The research team also fits together well, with occasional In-N-Out runs when their work is done. As Morrison puts it, Professor Choi is “a fun person to be locked in a lab downstairs with for eight hours.”