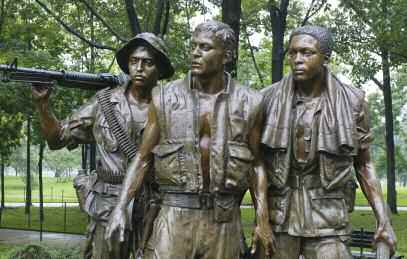 Students in Professor Tomás Summers Sandoval’s Latino Oral Histories class spent the fall semester interviewing Chicano Vietnam veterans as part of a project that will live on for posterity.

The histories will be added to the Veterans History Project at the Library of Congress, which compiles first-hand accounts from U.S. veterans so that future generations may “better understand the realities of war.”

The number of histories in the collection from Vietnam veterans is growing, but Summers Sandoval notes that only a small minority of those histories are from Chicanos. Contrast that with estimates that Chicanos, who often served on the front lines in Vietnam, accounted for a disproportionately high percentage of U.S. casualties in comparison to their proportion of the U.S. population.

To Summers Sandoval, who grew up in Southern California, the stories he’s collecting hit close to home—his father, uncle, and “pretty much every male I knew growing up” were Vietnam veterans. “I approach it as a historian, but it also has a very personal connection for me,” he says. “It’s an endeavor to retrieve and start to analyze what is part of larger [Chicano] history.”

The project involves recruiting volunteers, recording their oral interviews and compiling the interviews in a digital format to eventually be posted online. To find participants, Summers Sandoval and his students first targeted alumni networks of 1960s grad classes from East Los Angeles high schools, and have collected about 25 oral histories so far—in a year, he hopes to have 100.

“They’re not just interviews about Vietnam, they’re life stories,” says Summers Sandoval, assistant professor of history and Chicano/Latino studies. “There’s a strong sense of the entire process of surviving— adapting and learning to be a veteran of this war, learning to be one of the ones who survived, learning to live with post-traumatic stress disorder. It’s a culture of survival.”

The interview process isn’t always easy, dealing with subjects that can be hard to talk about, not to mention events that occurred 40 years in the past.

A Vietnamese American, Evyn Le Espiritu ’13 noted in her final reflection piece for the class that she had initially felt some wariness about how the veterans might view her. But her fears were not realized and the interviews were “intimate but not threatening.”

“I felt honored that the veterans shared their stories with me,” she wrote. “I was struck by their intimate association with death, by the fragile miracle of their survival, by the lasting effects of war on their psyche and well-being. I realized that there was a way to feel heartfelt respect and admiration for these veterans as individuals, without compromising my pacifist politics.”

Professor Summers Sandoval notes that after plenty of preparation, the students as a whole have been doing “very well.”

“It’s a very humbling thing to hear someone’s life story—I’m always very grateful that a stranger is willing to share that with another stranger,” says Summers Sandoval.

He has noticed a common thread among the veterans. “For a lot of them,” the professor says, “at times … it seems like they’ve found some kind of peace with the past.”