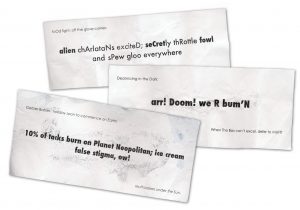 There’s talk lately of strengthening connections between generations of Sagehens through the College’s traditions. One that has been missing in action was known as Mufti, a secret society whose members used to post anonymous paper messages laden with puns and other word play on buildings around campus. Often, the messages had to do with campus controversies of the moment that are indecipherable years later. In recent years, Mufti had gone silent. But in September, a message stuck to campus spots that included a bench, a lamppost and a few buildings provided commentary on the heat, drought and college rankings and concluded, “Fear not, comrades, for MUFTI is near/To bring you all some meager cheer….” It also included a QR code. Very 21st century. If you’re ready to spill some tea about Mufti past or present or tell us about your favorite Pomona tradition, write to us at pcm@pomona.edu.