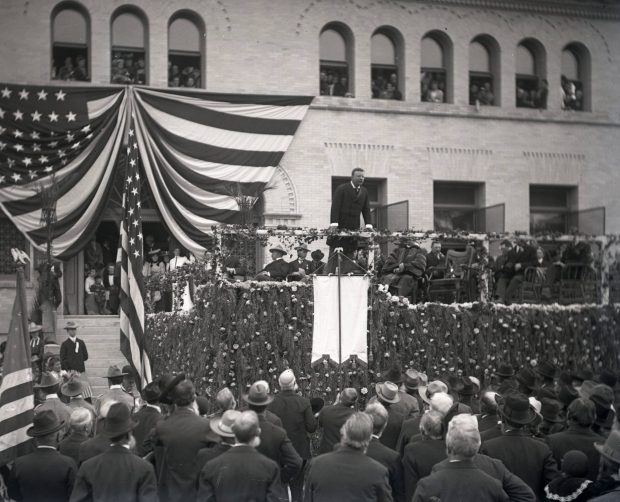 Almost everyone who comes to Pomona College learns that Theodore Roosevelt gave a speech in front of Pearsons Hall in 1903, the only visit by a sitting president in Pomona history.

In one of the stories in this issue of Pomona College Magazine, there’s an allusion to a theme in some of Roosevelt’s more famous addresses. Though the exact phrase “dare mighty things” comes from his 1899 speech “The Strenuous Life,” the better-known speech is “The Man in the Arena,” itself part of a longer address called “Citizenship in a Republic” that Roosevelt delivered in Paris in 1910.

A popular figure at the time, Roosevelt is more controversial today for certain imperialist and racist views. And the famous speech is mostly spoiled for me anyway by Richard Nixon’s use of it as he resigned the presidency in disgrace in 1974, still believing he was being persecuted.

What draws me in isn’t the “It is not the critic who counts,” part, though granted, that might have something to do with my background in journalism. Instead, it’s the words at the end about being willing to fail in striving for a worthy cause. Like poet Robert Browning’s idea that one’s reach should exceed one’s grasp, it encourages aiming for more than we might be able to achieve, along with accepting that we may be judged for it.

That willingness to try, not blindly but with a clear understanding that they might not be able to do the thing they set out to do, is at the heart of several of the stories in this issue. Jessie Berman Boatright ’98 and Laila Bernstein ’04 work intently in Boston with their teams in the Mayor’s Office of Housing to try to end homelessness, even though it often seems like every time 100 people find homes, another 100 appear in the streets. Laura Kerber ’06 works at NASA’s Jet Propulsion Laboratory, where virtually every shot is a long shot. And Zach Landman ’08 and his wife Geri, both physicians, are bringing to bear all their training, talents and connections to try to find a cure for their daughter Lucy’s rare genetic disorder. Even if they can’t, they’ve launched a foundation to try to discover therapies that might help cure other children with single-gene disorders.

There’s another story in this issue that reflects a different type of persistence and conviction. It’s an essay by physician Atsuko Koyama ’96 about why she has chosen to be an abortion provider. I ask you to hear her out to better understand why her professional and personal experiences have led to her decision, and to respect her readiness to explain it.

These Pomona alumni exhibit a boldness some educators believe is diminishing among high-achieving students: the willingness to fail. When getting a B feels like failure for students trying to gain admission to highly selective colleges or graduate schools, it can lead to not attempting courses or projects beyond ones they’re confident they’ll master. When a student at another college once told me she had failed an engineering course in statics, I remember being surprised she didn’t change her major. She took the course again, passed it, won a six-figure federal grant for her technology startup and completed her degree.

So here’s to trying, and to trying again.