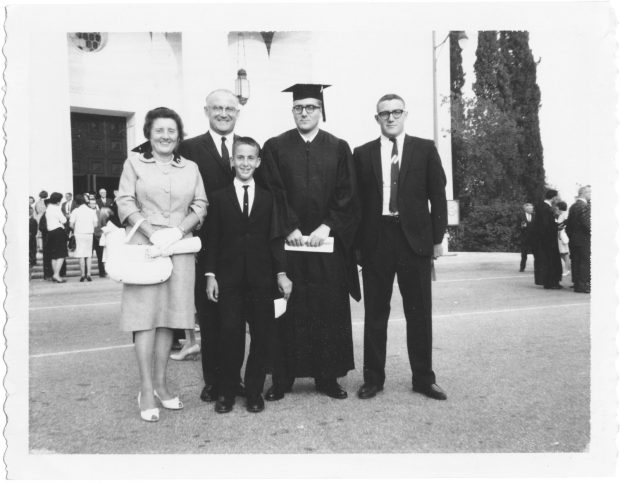 Liese and Albert Eckstein in a family photo at son Paul’s 1962 graduation from Pomona, along with images of their U.S. citizenship papers.

Established by Pomona College Trustee Paul Eckstein ’62 P’92 GP’26 and his wife Florence P’92 GP’26 in memory of Paul’s parents with a gift of $1.2 million, the permanently endowed scholarship will provide students with refugee status and financial need a chance to continue their education.

Paul’s father, Albert, born in 1908 in what is now Romania, immigrated to America with his family as a teenager to escape the rise of anti-Semitism in Europe. Encountering quotas on Jewish students in U.S. medical schools, Albert returned to Europe to attend medical school in Germany, where he met Liese Lotte Bendheim. With Hitler in power by the time Albert earned his degree in 1936, the couple left Germany for the U.S. ahead of the horrors of the Holocaust.

Paul said his father often spoke about the extraordinary waste of human talent caused by the Holocaust, other wars and political upheaval. Both Flo and Paul know his parents would be proud the endowed scholarship carries their names. Thinking of future recipients, Paul says, “Who knows if they will be Nobel Prize winners, great senators, or wonderful writers or musicians? I like to dream and think this gift will in some way help facilitate that.”