It’s a lot of hard work that coaches, players and staff have put into this, and we finally did it. We finally did it!
January 9, 2023  by Robyn Norwood 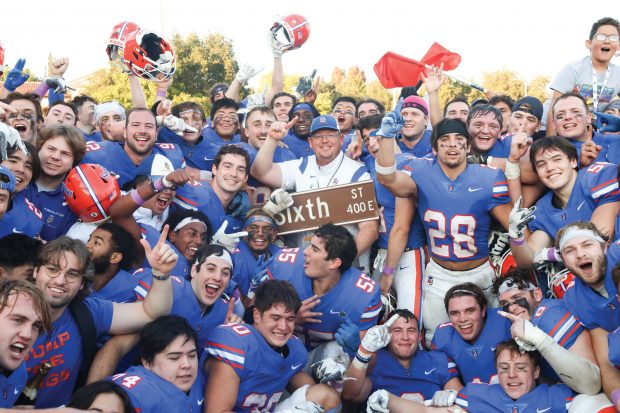 When students rushed the field after Pomona-Pitzer’s Sixth Street Rivalry win over CMS for the first SCIAC title and first NCAA playoff berth in the program’s history, a few of them already had bottles of bubbly ready to spray in celebration.

Figuratively speaking, the champagne had been on ice for 67 years. Pomona had not won a SCIAC football title since 1955—so long ago that Pitzer College had not yet been founded and Pomona and Claremont played together on a combined team.

“It means the world. You imagine this, and now it’s a reality. Nothing beats it,” says defensive back Vaish Siddapureddy ’22, one of the Sagehens’ fifth-year seniors already taking classes at Claremont Graduate University while playing their final seasons after the COVID-19 pandemic canceled the 2020 season. 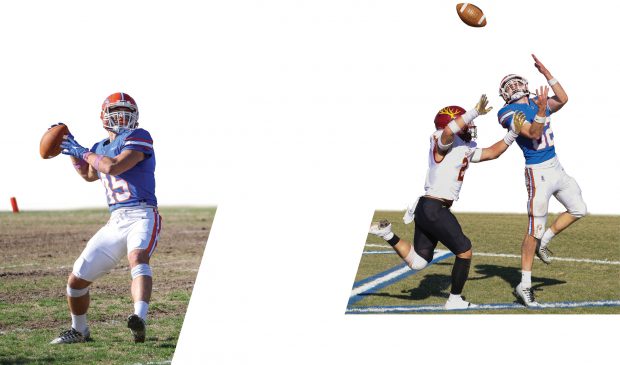 Quinten Wimmer PZ’24 on left, Will Radice ’22 on right

Emotion was flowing along with champagne spray after a hard-fought 28-14 victory over CMS (7-2) on November 12. Officially, the two teams shared the SCIAC title with one conference loss each, but the Sagehens earned the automatic NCAA berth and bragging rights by virtue of their head-to-head win over the Stags. 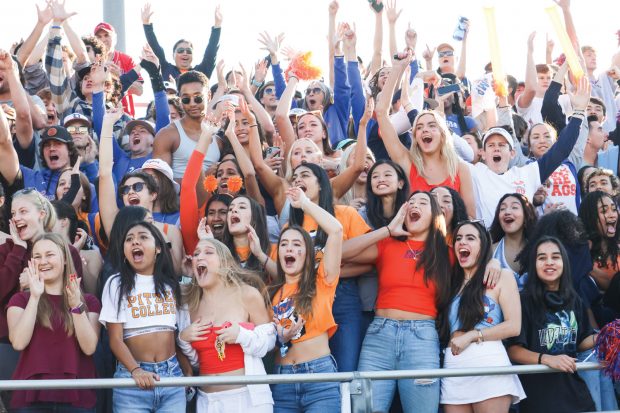 A week later, Pomona-Pitzer bowed out in the first round of the 32-team NCAA Division III football playoffs in a loss to undefeated Linfield University on November 19 in McMinnville, Oregon. But this Pomona-Pitzer team left its mark with an 8-3 record—the most wins in program history—with two of the losses in overtime.

“It’s a lot of hard work that coaches, players and staff have put into this, and we finally did it. We finally did it,” says John Walsh, head football coach and assistant professor of physical education.

It has been a long climb. When Walsh arrived at Pomona-Pitzer in 2013 as defensive coordinator and associate head coach, the Sagehens had won only two games over the past three years, making them one of the least successful programs in the country.

“It needed to be rebuilt,” Walsh says. “We took some time and solidified the infrastructure and then brought in the right coaches and the right players. That’s how you do it.”

Since Walsh took over as head coach before the 2017 season, the Sagehens have gone 27-20 and had only one losing record.

“When I first came into this program, Coach Walsh had only been here for a few years,” says offensive lineman Michael Collins ’22, who graduated with a degree in economics in May and will earn an MBA from Claremont Graduate University’s Drucker School of Management this spring. “He made a real point to change the culture here. This was a team that hadn’t won games in a long time. It had been 60 years at that point since Pomona had won a league championship. I really was inspired by the people he recruited to come in.”

The game was played in front of an overflow crowd at Merritt Field, with spectators leaning on the fences outside the stadium after the stands filled.

“When I came in, I had no clue how big a rivalry this really was,” says Collins. “It means a lot because this rivalry between the two teams has been a huge part of my time here. As much as you want to beat the other guys, the reality is, it makes both teams better. Both these teams, CMS and ourselves, have pushed each other in these tight rivalry games.

“I think it’s a real testament to not only what Pomona and Pitzer have going on, but all the 5Cs.”