4+7 Cool Things About the New Center for Athletics, Recreation and Wellness

When the glass doors of the Center for Athletics, Recreation and Wellness swung open in October, we heard words like “beautiful,” “gorgeous” and “When can alumni use it?”
January 9, 2023  by Staff 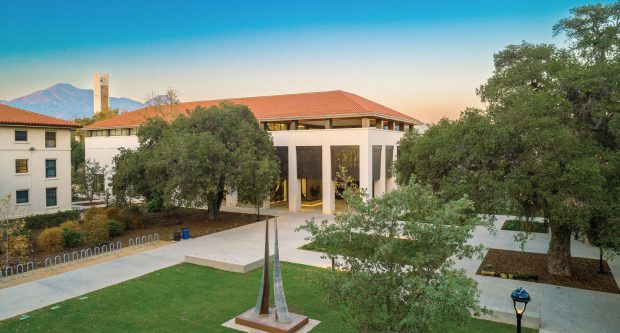 When the glass doors of the Center for Athletics, Recreation and Wellness swung open in October, we heard words like “beautiful,” “gorgeous” and “When can alumni use it?” Another question is what to call the nearly 100,000-square-foot building in day-to-day use. Generous gifts by Ranney Draper ’60 and Priscilla Draper as well as the Bill & Melinda Gates Foundation (facilitated by Libby Gates MacPhee ’86) allowed Pomona to begin construction on the $57 million project in 2021. Yet when the principal donors selected two special interior spaces—the fitness center and the upstairs gym—to name in commemoration, it left the building without a nickname. The acronym—CARW—wasn’t doing it for Jasper Davidoff ’23, who suggested in an opinion piece for The Student Life it might be better to rearrange the letters for the new home of Sagehen Athletics to a more ornithologically correct CRAW. Other efforts to invoke the sage grouse have landed on the Nest and the Roost. Still another attempt by students to make the acronym roll off the tongue was WARC, as in a place to WARC out. For now, we’ll go with that big, gorgeous, light-filled building at the end of Marston Quad between Big Bridges and Sixth Street. Hope to see you there on Alumni Weekend.

Several large older oaks offer their shade near the building’s entrance, and new wooden tables and chairs entice people to linger in Rains Courtyard. Along Draper Walk on the south side of the building, a row of existing mature oaks has been enhanced with two newly planted young oaks and new benches. A larger oak has been planted between the new building and Smiley Hall, creating a small seating area outside the residence hall and a pleasant, leafy view from the fitness center. A subtle architectural reminder of Pomona’s lovely old oaks are the dappled shadows that fall on the concrete beneath the perforated shade panels that line the top part of the entry portico, and at night the light from the building lends a lantern-like effect. 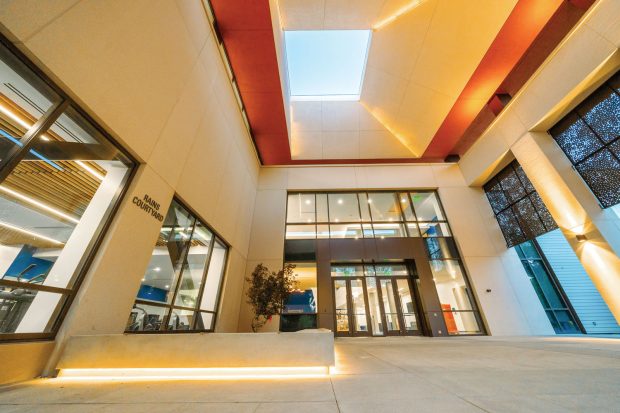 Pomona’s familiar campus Skyspace by artist James Turrell ’65 welcomes sunrise and sunset with varied hues of light on the other side of Sixth Street. Architect Tim M. Stevens of the firm SCB added a nod to Turrell’s work in designing the Center for Athletics, Recreation and Wellness: Look up as you pass through Rains Courtyard just before the main entrance and you’ll see a rectangle of open sky, often a brilliant shade of blue.

The basketball court from the earlier Memorial Gym that existed before the Rains Center opened in 1989 had been in storage for decades. The old maple court has been repurposed to gorgeous effect in the Center for Athletics, Recreation and Wellness, adding a midcentury vibe to an otherwise contemporary space. A feisty painted Sagehen on one piece of the court welcomes visitors to the front desk. Wood from center court, marked with the PP logo in the jump circle, can be found above the hallway leading to refurbished Voelkel Gym. And not to be overlooked, an expanse of blond refinished wood from the court provides a seating area along the large central stairway. 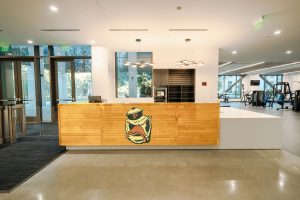 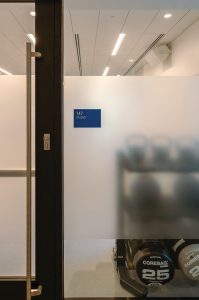 With double the studio space of the previous building, there can be two classes in session at once, whether they are P.E. classes, general fitness sessions or faculty/staff fitness and wellness activities. Spin cycling is a new offering, along with standbys like yoga, Pilates and high-intensity interval training.

Each studio features a student-designed mural: Nico Cid Delgado ’25 is the artist of the one in Studio 147 downstairs, and Kaylin Ong ’25 created the one in the Ahmanson Studio on the second floor. And yes, the first-floor studio is literally room number 147. 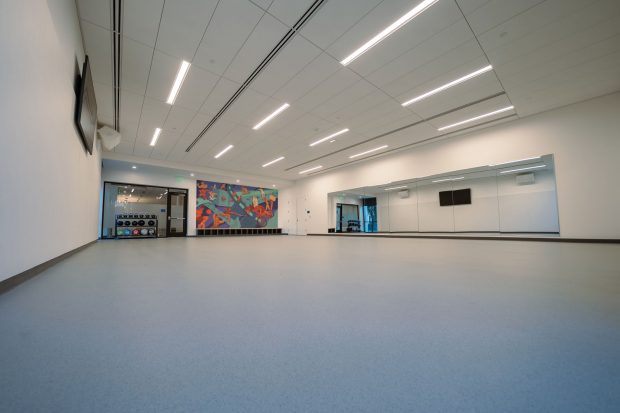 With 12 locker rooms—including day-use lockers for students, faculty and staff—the building provides enough spaces for each of Pomona-Pitzer’s 21 Division III NCAA teams to have its own locker room during the season. Large, colorful banners with the sport’s name and one of the team’s Sagehen athletes of the past make the rooms feel special in-season—and the banners can be exchanged for a different sport’s when another team takes over later in the year. Instead of rooms that were too small or too large for a team’s personnel, they are right-sized—and players love that their names are posted on their stalls. 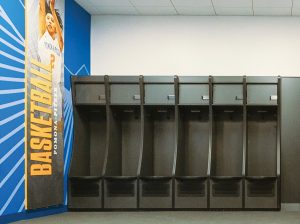 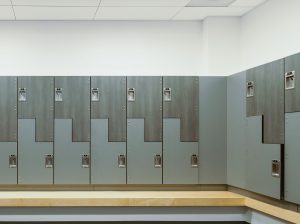 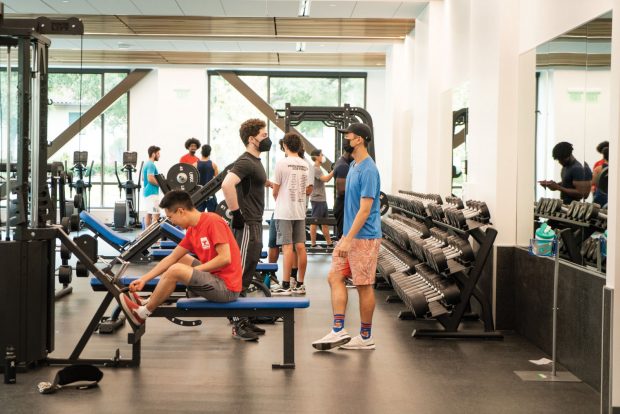 Spanning nearly 6,000 square feet just inside the main entrance and surrounded by windows on three sides, the Draper fitness center is the heart of the building. A space to nurture the health and well-being of students, faculty and staff, it also has become a new place to see and be seen. Indoor joggers, cyclists and stair-climbers can log miles on machines with a view of the passersby on busy campus walks—and perhaps those passersby will be inspired to come inside and work out too when they glimpse others doing cardio and lifting weights. 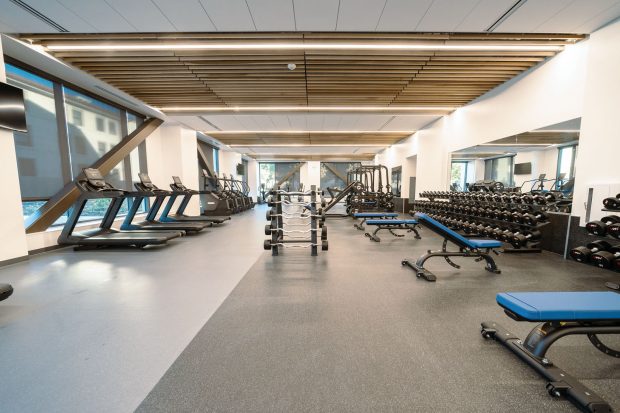 That view. The San Gabriel Mountains are striking from many points on campus, but the sight of their snow-capped peaks in winter from the second-floor recreational and practice gym is stunning. The nearly floor-to-ceiling windows frame the scene spectacularly. Insider’s tip on the N&N Gym name: It’s a tribute to former head women’s basketball coach Nancy Breitenstein (1969-92) and her longtime assistant Nettie Morrison by former player Libby Gates MacPhee ’86. The teams coached by “N&N” included the 1981-82 team that reached the Final Four of the first NCAA Division III women’s basketball tournament ever held, along with the string of teams that dominated the SCIAC for much of the 1980s. 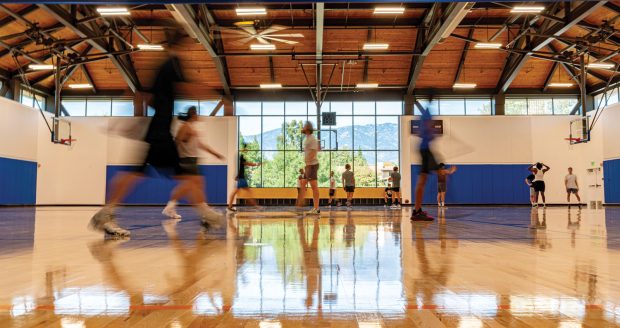 Pass through the Athletics Department conference room at the back of the building on the second floor and you’re suddenly in an unexpected space: The Elizabeth Graham Olson and Steve Olson Family Terrace is a spacious shaded balcony with views of Merritt Field and Alumni Field. It’s a lovely spot for a small special event, a prime stop for visiting recruits and a very sweet perch to take in a football game, which comes in handy: Liz and Steve Olson are the parents of Sagehen football players Graham Olson ’23 and Matthias Olson ’26. 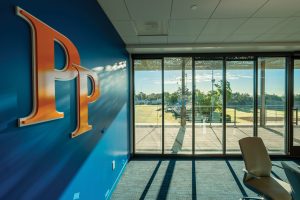 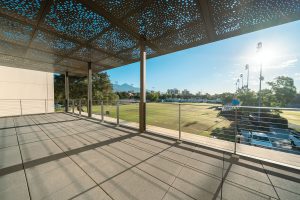 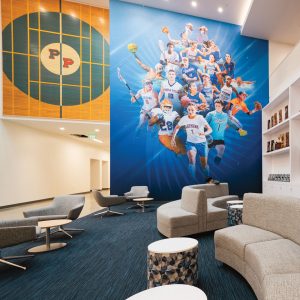 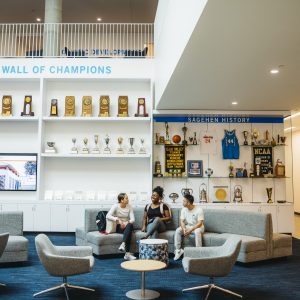 What was largely neglected space along Sixth Street is now a gathering place, perfect for Sixth Street Rivalry games against Claremont-Mudd-Scripps or just a spot to pause during the day. An orderly arrangement of sycamore trees, benches made of wood and concrete, and a central planter create a sense of place. Plus, the metal wall sculpture Four Players by Bret Price ’72 has a new home on an exterior wall after being moved from inside the now-demolished Memorial Gym. Another new gathering place, Rains Courtyard outside the front entrance, provides more welcoming surroundings for another large-scale metal sculpture by an alumnus, In the Spirit of Excellence by Norman Hines ’61, which remains in its earlier location but is more prominent in the new landscape. 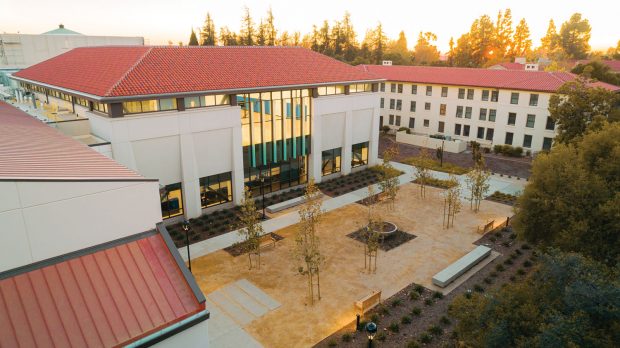 On the first floor with a wide view of Merritt Field, the nearly 5,000-square-foot strength and conditioning center is a cavernous space where varsity athletes train, along with other users. The equipment includes a dozen new Olympic lifting platforms painted in Sagehen blue and orange, plentiful free weights and a three-lane indoor turf strip. It’s as impressive as some NCAA Division I facilities and an enticing stop on the tour for athletic recruits. “I’m obviously biased but it’s probably a top-five Division III facility,” says Athletic Performance Coach Greg Hook PZ ’14. 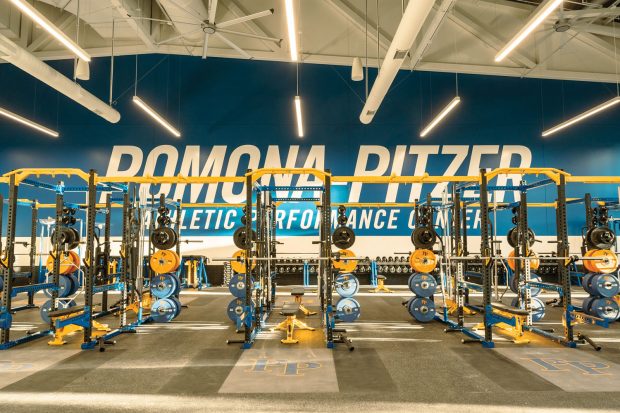 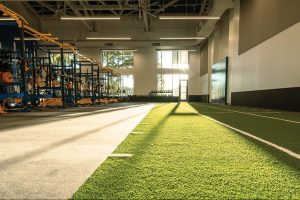 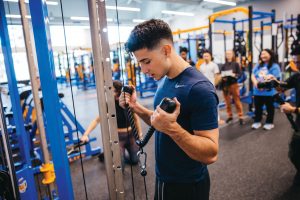