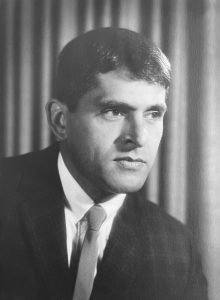 Julian Nava ’51, a professor and trailblazing advocate for public education who later became the first Mexican American to serve as U.S. ambassador to Mexico, died July 29, 2022. He was 95.

Nava, a professor of history at Cal State Northridge for more than 40 years, served on the LAUSD board for 12 years, including two stints as board president. A proponent of bilingual education, a multicultural curriculum and school integration, he emerged as a pivotal figure in the first year after he was elected during the volatile protests remembered as the East L.A. high school walkouts or Chicano “blowouts,” when thousands of students walked out of classrooms demanding more equitable education. Nava, a graduate of Roosevelt High in Boyle Heights, immediately found himself in the middle.

“Having grown up in East Los Angeles and having experienced the same unfair treatment that these students were experiencing, he understood it like no other member on the board,” remembers his daughter Carmen Nava, a professor of history at Cal State San Marcos.

“It was a trial by fire and on a certain level, everybody criticized him. People on the right felt like, ‘Who is this person who’s sympathetic and soft on crime?’ People on the left were like, ‘Why are you wearing a suit? You’ve just become one of them and you’re a sellout.’”

Nava—at times under such criticism he was advised to wear a bullet-proof vest—persuaded the board to move a pivotal meeting to East L.A.’s Lincoln High, and the board eventually implemented reforms that met most of the students’ demands.

“He had to find a way to speak with his brand-new colleagues on the board—to talk with them, to learn from them, to educate them, to convince them that this was an opportunity to listen to these students—and to do what he could, for example, to try to prevent an overreaction, a police reaction, to what the students were doing,” his daughter says.

Though Nava hadn’t planned to go into politics or diplomacy, he was appointed U.S. ambassador to Mexico in 1980 by President Jimmy Carter, serving until 1981 after Ronald Reagan had taken office. In 1992, not long after he taught at Pomona as a visiting professor, Nava announced a run for mayor of Los Angeles, but his candidacy never took hold.

Nava arrived at Pomona after serving in the U.S. Navy Air Corps near the end of World War II. The GI Bill provided a pathway to higher education, and he became the first of eight siblings to attend college. He enrolled at East Los Angeles College, where he was the first Mexican American elected student body president. One of his teachers, a Pomona alumna, pointed him toward her alma mater, suggesting that he could be accepted despite a B+ average. “She explained that grades were not everything that Pomona would take into account. My well-rounded background, military service and election as student body president could help gain acceptance,” he wrote in his autobiography, Julian Nava: My Mexican-American Journey.

At Pomona, Nava recalled, he was one of only a handful of students with Spanish surnames. He reveled in eating in Frary Dining Hall under the Prometheus mural by José Clemente Orozco, one of Mexico’s greatest artists. Professor Hubert Herring, a specialist in Latin American history, urged Nava to apply to graduate school at Harvard. He was accepted and became one of the first Mexican Americans to earn a doctorate from Harvard.

As a young man Nava worked as a community organizer with the Community Service Organization. There he met labor leader Cesar Chavez. He served as a pallbearer at Chavez’s funeral in 1993.

Pomona presented Nava with an honorary doctor of laws in 1980, when he was a Commencement speaker. His time as a Pomona student was a watershed, his daughter says. “Up to that point, nothing in his life had been like that. But the beautiful Pomona campus, the richness of the experience that he had in his classes with his teachers and fellow students, I remember stories he would tell me about how small the classes were, almost like a seminar. I’m so grateful for that and I know that he was able to pass it forward to other students.”