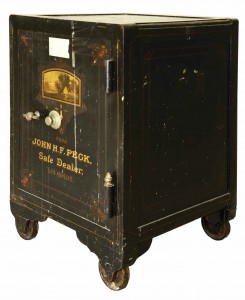 It sits like an abandoned tank in a basement hallway of Sumner Hall, just outside the entrance to the College Archives—an antique steel safe on rusty wheels, its surface scarred by decades of scratches and random drips of paint. On the front, below the combination lock and an oddly pastoral painted tableau, are the words “From John H.F. Peck Safe Dealer, Los Angeles.”

The only references to the John H.F. Peck company that turn up in a web search are from the 1890s, so it’s a safe bet (so to speak) that the object is as old as it looks. But how did it come to be here? And what’s inside?

The only known mention of a safe in the early histories of Pomona College is from Frank Brackett’s Granite and Sagebrush, in which the founding faculty member tells the story of a safe kept in the Office of the Dean in old Holmes Hall. One day in the spring of 1911, as he tells it, while most of the campus community was away at a picnic in San Antonio Canyon, the safe “simply vanished without leaving a trace.” No one had a clue what had happened until, a few weeks later, a professor noticed a squeak in the floor. Kneeling to investigate, he found that the linoleum had been cut. Pulling back the loose piece, along with the floorboards, which had also been cut, and scraping back the dirt, he discovered the lost safe, which, like Poe’s purloined letter, had been there all along, buried beneath the floor.

So is this the purloined safe that was once buried by pranksters beneath the floor of Holmes Hall? It certainly seems old enough, and it seems unlikely that the College, in its early, penny-pinching days, would have had more than one of these. It also makes sense that the Dean’s safe would have been moved to Sumner Hall when Sumner was relocated in the early 1920s and began to house the College’s administrative functions.

But we’ll probably never know for sure. And since the combination is lost in time, the safe’s contents, if any, are likely to remain a mystery as well.

If you have an item from Pomona’s history that you would like to see preserved in the Pomona College Archives, please call  909-621-8138.