How do we recognize and interpret the faces we see? How do we tell male from female, young from old? How do our brains translate human features into beauty? Neuroscientist Richard Russell ’97 is breaking the code.
April 7, 2016  by Julie Scharper 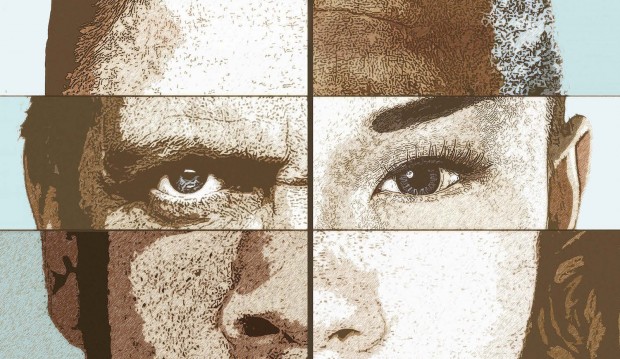 Spirits of Saturn was a fine, white powder that 17th-century women smoothed into their skin. Also known as Venetian ceruse, it hid smallpox scars, spots and blemishes, transforming faces into a fashionable pallor. It also slowly poisoned the wearer—it was made of powdered lead.

Over time, the powder caused teeth to rot, hairlines to recede and, in a particularly cruel twist of irony, the skin to shrivel and turn gray. Yet, for hundreds of years, European and Asian women dabbed lead on their faces. It’s not even the most unsavory preparation that women have used to whiten their skin. Ancient Roman women used crocodile dung; Japanese women preferred nightingale droppings.

Women have been powdering their cheeks, lining their eyes and rouging their lips for nearly all of recorded history. The story of makeup may begin even earlier—stores of red ochre found in Paleolithic caves suggest humans have been painting their skin for 100,000 years.

While ideals of beauty change over time and across cultures, some elements are nearly universal: fair, unblemished skin, ruby lips, alluring eyes. Psychologist Richard Russell ’97, who studies the biological underpinnings of beauty, believes he has figured out why.

Through a series of elegantly-designed experiments, Russell has proved that women’s faces have greater contrast than men’s. It’s as if Mother Nature applied an Instagram filter to the female face to make the eyes and mouth pop out from the rest of the features. And this contrast, Russell discovered, appears at puberty and ebbs at menopause, making it a marker of fertility.

In other words, Russell solved a riddle nearly as old as humanity. Why do women wear makeup? To look more feminine and more fertile. “There’s a lot of information we get from a face—age, health, sex, race, trustworthiness,” he says. “There are judgments that we make, even though we’re taught not to make them.”

Russell is not what you might picture when you think of a makeup scholar. The 40-year-old Gettysburg College professor is partial to plaid shirts and wire-rimmed glasses. He spends his free time hiking with his kids, not perusing the counters at Sephora. Even his wife, Carrie Russell, an attorney and novelist, doesn’t wear much makeup, Russell says. “Part of how I study this is I have an outsider’s viewpoint,” he says. “I don’t put that much work into my appearance.”

Russell’s interest in perception began during his undergrad days at Pomona, where he majored in neuroscience. Working on a student mural project sparked an interest in art, and Russell decided he wanted to study how the mind perceives beauty.

He received a doctorate in cognitive science from the Massachusetts Institute of Technology, then joined a post-doc program at Harvard. It was there that Russell made his first major contribution to the understanding of facial perception.

Russell was studying prosopagnosics, people who are exceptionally bad at recognizing faces (the term comes from the Greek words for “face” and “ignorance.” Prosopagnosics are unable to identify co-workers, friends, and, in the most extreme cases, their own spouses.

The neurologist Oliver Sacks wrote extensively about prosopagnosia, a condition with which he himself was afflicted. In an essay, he recounted being unable to recognize his own psychoanalyst when passing him in the lobby after a session. On another occasion, a woman he had been sharing a waiting room with informed him that she was his longtime assistant. She had been waiting to see if he could recognize her without prompting.

While some prosopagnosics, such as Sacks, apparently suffer from a hereditary condition, others lose the ability to recognize faces after an accident or illness. Scientists believe that a portion of the right side of the visual cortex, known as the fusiform face area, is primarily responsible for facial recognition.

As Russell studied people who had problems recognizing faces, he began to wonder if there were others who were exceptionally good at recognizing them. While researchers had traditionally thought facial recognition was a skill that people either possessed or lacked, Russell had a hunch that it was an ability that lay on a spectrum.

One of Russell’s subjects had told him of a friend who had an extraordinary talent for remembering faces. This young man recognized people he had glimpsed at a concert years ago. He had a mental library of extras from TV shows and movies. Russell devised a test to spot exceptional facial recognition ability. He administered it to his subject’s friend, and others, and discovered that there were indeed people who had an innate talent for identifying faces. In a 2009 paper, Russell announced the existence of such people and coined a term for them: super-recognizers.

Just as prosopagnosics often describe faking recognition to avoid embarrassment, super-recognizers admit to hiding their talents, Russell says. They learn, over time, that acquaintances can be creeped out when they say they remember passing them on the street years earlier.

Russell’s discovery has led him to question what other cognitive abilities exist on a spectrum.

“There’s an assumption in experimental psychology that we’re all the same,” he says. With the exception of personality and intelligence, most characteristics are assumed to be either-or. You have them, or you don’t. But if there is a spectrum for facial recognition, perhaps one exists for other abilities as well.

Harvard psychologist Nancy Etcoff, who also studies the biological basis of beauty, says Russell’s work challenges the field’s established notions. “He’ll take a known finding and make you think about it in a different way,” she says. Russell is a “creative, thoughtful and rigorous researcher,” whose research has inspired some of her own recent work, she says. 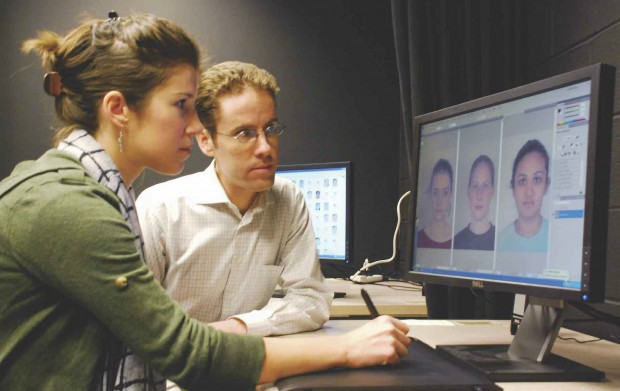 Richard Russell ’97 works with a student in his lab at Gettysburg College.

While many think of beauty as a subjective construct, Etcoff argues in her book, Survival of the Prettiest, that we are primed to find certain evolutionarily adaptive traits attractive.

The first three criteria aren’t really surprising; all signal fertility. But what does the fourth mean? When scientists blend together images of many faces, people find the composite much more attractive than any of the other faces. These “average” faces mimic our own mental images of the archetypal male and female face.

That female face, it’s important to mention, is lighter than the male face—women are, quite literally, the fairer sex. Regardless of ethnic group or skin color, women’s faces reflect 3 percent more light than their male counterparts. The contrast is most noticeable during young adulthood, and fades with age.

According to one hypothesis, women have paler skin during their fertile years so that they can more easily synthesize vitamin D3, which helps absorb the calcium a developing fetus needs.

To test his theory on facial contrast, Russell showed a series of male and female composite faces to subjects. He decreased the contrast for some of them. When subjects saw female faces with less contrast, they ranked them as less attractive. But the opposite was true for male faces—subjects thought the men grew more attractive when their eyes and lips stood out less.

For other photos, Russell increased the contrast between the eyes and lips and surrounding skin. Subjects said that this made the female faces more attractive, while the male faces became less so.

So how does all of this relate to the cosmetics counter? Women use makeup to darken their eyelids and brows, to hide skin imperfections and to add color to their lips and cheeks. In other words, as Russell also demonstrated in a 2009 paper, makeup increases facial contrast. By making their eyes and lips pop, women make themselves look younger and more feminine, and, therefore, more attractive.

Etcoff made headlines a few years ago with a study that showed people perceive women wearing makeup as not only more attractive, but more competent and trustworthy. What we tend to think of as a “natural look,” is actually a face that has been subtly embellished with makeup.

“Women use makeup similarly across time and cultures,” Russell says. “I’m trying to marry the knowledge of perceptions of human attractiveness with what people have been doing for thousands of years to enhance their faces. We could learn a lot about makeup by applying this psychological research.” Chanel, the century-old French cosmetics company, seems to think so too, since it’s currently funding some of Russell’s research.

In the future, Russell is interested in delving into other aspects of appearance. After all, people have been styling their hair and covering their bodies for at least as long as they have been painting their skin. What do we reveal—and hide—about our evolutionary fitness through clothing and hair?

“Some people think a core aspect of what makes us human is altering our appearance,” Russell says.