Man of the World

When he’s not delivering Pomona’s mail, Adan Amaya is traveling the world with languages
April 7, 2016  by Anthony Bald '17 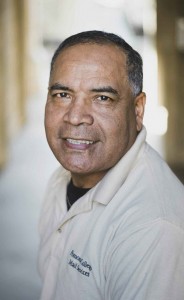 Adan Amaya knows that to travel the world, you don’t necessarily have to go very far. Known for his outgoing personality, Amaya enjoys meeting students, faculty and staff in his daily rounds with Pomona’s mail services team. And when he’s not delivering the mail, he’s at Oldenborg Dining Hall using his passion for language to travel the world himself.

Born in El Salvador, Amaya moved to San Bernardino 35 years ago. His 20-plus years of experience as cook made it easy to find a position with Scripps dining services in 2007, but he was soon ready for a change. He is now in his eighth year at Pomona, where he exercises his love of language every day at Oldenborg.

“Rita Bashaw [Director, Oldenborg Center] approached me one day and invited me. I really was kind of shy because I don’t have experience being around students, but I said ‘I’ll be there.’ I started going, and after that I liked it. I’m always there, every day.”

Amaya speaks four languages—his native Spanish, English, Greek and Italian—with more to come. On Wednesdays, he’s at the beginner Italian table, while on Thursdays, he goes Greek. He spends the rest of his lunches at the Spanish table, helping beginner and intermediate students with their conversation skills.

“I’m committing myself because I love it; it’s my passion to be there with the students because the students really want to learn Spanish, so I can give them a little motivation to practice and have conversations.”

Even before arriving at Pomona, Amaya was exploring his capacity for languages. His first goal upon coming to the United States from El Salvador was to learn English, but then his language learning took a turn. His cooking experience brought him into work with a Greek family as cook, manager, and eventually supervisor in their southern California restaurants. To advance in the business, he says, it became necessary to learn Greek. Between two trips to Greece (once in 1998 and again in 2000) and 10 years of studying, Amaya has mastered the language.

When he left the restaurant business, he didn’t stop there. “I do speak Italian too, but Italian is easier than Greek,” he says. “Italian is very easy because once you master Spanish, you can go ahead and do Italian.” What’s next for Amaya? French, he reveals, and a little farther down the road, Portuguese. “I always have a little space for learning something,” he adds.

When Adan isn’t traveling the world through language, he’s probably, well, traveling. He makes the trip back home to El Salvador twice a year; he has even brought Pomona students along with him, including a Chinese student he met during his Oldenborg lunches.

“He showed up to the Spanish table with his little Spanish,” recalls Amaya. “I said, Bob, do you really want to master Spanish? In order to do that, you have to put some passion into it. I’ve been seeing his improvement over two years, and he took the courage to go with my family back to El Salvador. That’s one of my greatest experiences.”

From his trips to Greece to his travels around Central and South America, Amaya is no stranger to exploration. His next destination: Roatan Island, Honduras. For someone who naturally likes to wander, he was surprised to discover he feels right at home with Pomona’s mail services team.

“I never thought that I would stay for very long. But since I’ve stayed at Pomona and seen how the environment is related to the work, and how you move around with people, I’ve liked it. I’m going to hang out here at Pomona for a long time.”