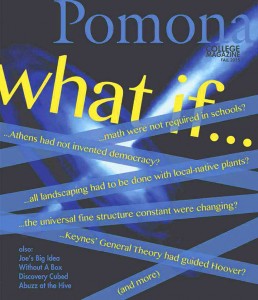 I have long admired your evident editorial hand displayed in the Pomona College Magazine, but the Fall 2015 “What If?” issue deserves special salutations. Others may have come up with the “What If?” idea, but you saw the power in it, which led to a marvelous and stimulating and coherent set of articles of intrinsic value, but which also reflect well on Pomona College as an institution of liberating education. Thank you for your continuing skilled efforts.

I received the email for the survey on improving Pomona College Magazine. I wanted to commend you on looking to improve what I believe is an already fine publication. PCM holds a special place in my heart because my exposure to it was the spark that sent me to Pomona.

My senior year of high school, I was doing the usual contacting of universities for their information packet and application. I received Pomona College Magazine in my request for information from Pomona. Rather than another vanilla college brochure intent on marketing to me why I should come to their school (“Small class sizes! Award-winning faculty! Here’s a picture of an ethnically diverse circle of students sitting on a grassy quad!”), PCM was something else altogether. PCM was a beautiful snapshot of a breathing institution, populated by what appeared to be really fascinating, really smart people. Back then my family had a good bunch of magazines coming into our home: Time, Discover, National Geographic, etc. In PCM, I saw a glossy, high-quality magazine that was on the same level as those national publications, both in the writing and in the gorgeous photography. PCM seemed to be making an unspoken promise to me: if I could make it into this college, I could be just as amazing as these people that were being profiled. A campus visit only confirmed what I saw, and I was hooked. At that point, every other college application would just be for safety schools. (Okay, that’s a little lie… If Stanford had accepted me, it would have been hard not to go!)

That issue of PCM that I received was probably Fall 1989. In all the intervening years, PCM has maintained the wonderful writing (I’m still a sucker for the alumni and faculty profiles) and the gorgeous photography. I wanted to thank you for your work at the magazine, in continuing the stewardship of what, for me, was a life-changing publication.

Needless to say, I’ve completed the survey. I hope the survey’s results will help you continue to steer the magazine toward fascinating waters.

It was disappointing to read President Oxtoby’s email to the Pomona College community about the recent protests on college campuses around the nation without mention of a commitment to protect freedom of speech at Pomona. There is a dark side to the national protests seen in the ludicrous attempts to police Halloween costumes and more broadly, to silence and punish speech deemed “offensive.” Instead, President Oxtoby’s emphasis on “pain,” “sorrow,” and “institution-alized racism,” romanticizes and fetishizes victimhood. President Oxtoby should not be encouraging young men and women to see themselves as victims of oppression, but instead as adults with agency who have made a choice to attend a terrific, albeit imperfect, liberal arts college where they have consented to listen to competing, different, and sometimes offensive ideas in order to broaden their own minds and grow into tough-minded future leaders of their communities. I hope the students and the greater Pomona College community will continue to flirt with dangerous and offensive notions, to talk, argue, read and listen, in order to develop convictions born of experiences, mistakes and failures, instead of trying to create a protective cocoon from which all pain and sorrow can be avoided.

In view of what happened at CMC I realize that David Oxtoby must tread warily in this minefield but I am appalled by what is taking place in Anglo-American universities. In England’s Warwick University, sophomore George Lawlor questioned ‘consent workshops’ arguing the vast majority of men ‘don’t have to be taught to not be rapists.’

I would have thought this was stating the obvious but in the atmosphere of politically-correct intolerance poisoning our universities he was denounced by radical feminists. The workshop was part of an attempt to create yet more “safe spaces” but it is clear there are to be no safe spaces for “unbelievers,” and feminists demand he be expelled.

He is in good company as Warwick has already banned human-rights campaigner Maryam Namazie over fears she might criticise Islam’s treatment of women. Universities should be the crucible of free expression and the interplay of ideas instead of the promoters of enforced conformism through the politics of grievance and resentment.