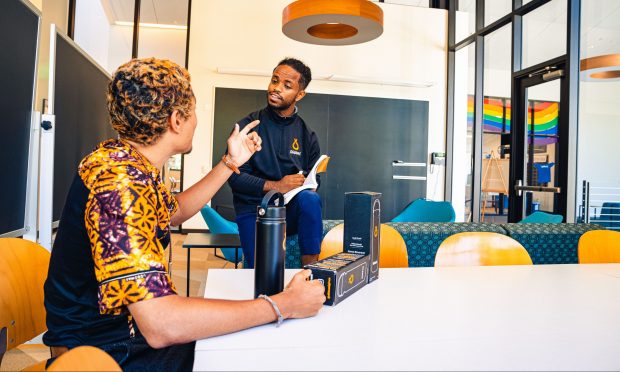 It’s around lunchtime on a weekday when two friends meet up in the Smith Campus Center’s courtyard. A dozen or more outdoor tables are buzzing with Pomona College students as they chat, eat and work under umbrellas protecting them from the high-noon sun. In the middle of the courtyard, recycled water endlessly cascades from a spout in the iconic Smith Campus Center fountain. For Anaa Jibicho ’23, the fountain is a reminder of his mission.

At a small table, Jibicho sits with his best friend and business partner Brian Bishop ’22 as they await the lunch they’ve ordered from the Coop. Together with a third partner, Lamah Bility, they run Didomi—a social enterprise named for the ancient Greek word for giving and founded on the principle of helping the nearly a billion people around the world who don’t have access to clean, safe water near their homes. They do this by donating a portion of the profits from sales of their fashionable, reusable water bottles to WaterIsLife, a nonprofit that provides filtration systems, pumps and drilling to help people access clean and safe water. The ventures also work to spread awareness of the crisis across the world.

“Water here is an aesthetic,” Jibicho says as he points to the fountain. “To have a basic necessity so readily available, we don’t think twice about it.” 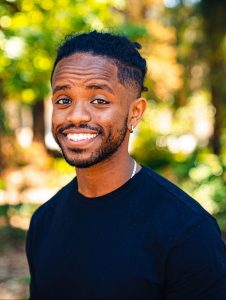 Jibicho, an economics major, started Didomi in 2019 with Bility in Minnesota, where they had separately arrived as refugees from Africa at ages 7 and 11. As a young child in Ethiopia, Jibicho suffered the ill effects of drinking unsafe water. He and his family, members of the persecuted Oromo people, were forced to drink the only available water–which was not just unsafe but lethal. Before Jibicho’s birth, his mother had already suffered the unthinkable: Two of her children had fallen ill and died after ingesting unsafe water. When 2-year-old Jibicho became sick as well, she was determined not to lose another son. They fled to Kenya, and as refugees, she secured medical care that saved her youngest child’s life.

During his Orientation Adventure as a first-year student, Jibicho opened up and told his story to others in the group. Bishop, a sophomore leader on the trip who grew up in Albuquerque, New Mexico, was staggered. “The numbers also blew me away,” says the math and media studies major. As Jibicho explains: “Nearly a billion people lack access to safe water, and unsafe water kills more people than war.”

The two students connected further as the year went on, but it was another outdoor experience that cemented their burgeoning friendship. An avid outdoorsman, Bishop invited Jibicho to the annual Ski-Beach Day, traditionally held in the spring semester. At a cost of $5 dollars per person, the trip takes a busload of 100 Pomona students to Mountain High resort in nearby Wrightwood for an early day of skiing followed by a same-day drive to the Pacific Ocean for an afternoon of fun in the sand. The trip always sells out. To secure a spot, students begin lining up early in the morning at the Associated Students of Pomona College office in a line that stretches around the second floor of the Smith Campus Center. Luckily for Bishop and Jibicho, they secured ticket numbers 98 and 99. 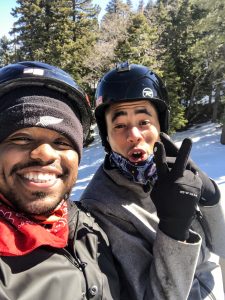 Jibicho and Brian Bishop ’22 on the slopes

Bishop, a member of the five-college ski and snowboard team that competes nationally, taught Jibicho to ski. He says it took a lot of convincing to drag Jibicho to the slopes. But now, skiing is one of Jibicho’s joys.

Conventional wisdom says that friendship and business don’t mix. Bishop says that opportunities like Pomona’s Orientation Adventure and Ski-Beach Day were instrumental in building a strong and holistic relationship between the two of them. “If you have those types of relationships, you’re more able to work together,” he says.

During spring break in 2020, when the COVID-19 pandemic was just beginning, Jibicho saw an opportunity to grow Didomi’s potential. Staying with Bishop in New Mexico for the week, Jibicho pitched him an idea: Join Didomi and be a part of something bigger than both of them. Bishop had been looking into summer internships where he could use his media studies and creative skills and learn from experts.

It took a lot of persuasion, says Jibicho, to steer his friend away from a traditional internship and to take a leap of faith with Didomi instead: “I pitched him to create his own opportunity at Didomi and to learn by doing.”

Today, Bishop laughs remembering how much his friend had to do to get him to say yes—probably almost as much as he had to do to convince Jibicho to join him on those early ski trips.

By the summer of 2020, Bishop had moved in with Jibicho and Bility in their hometown of St. Paul, Minnesota, to develop brand guidelines for the reusable water bottle company. 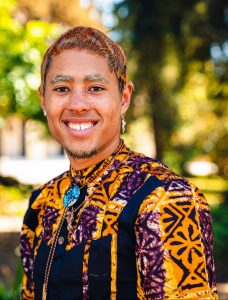 Bishop’s arrival in the Twin Cities coincided with the George Floyd protests rocking the Minneapolis area. Floyd’s death under the knee of police officer Derek Chauvin was captured on camera, sparking public outrage and unrest across the U.S.

Before even going to their apartment, Jibicho, Bility and Bishop attended the protests, with Bishop’s luggage still in the trunk. The energy on the streets inspired the three young Black men, and before long they took turns on the microphone sharing about their own experiences.

The energy of that historic summer continued to fuel the trio as they drew out Didomi’s vision, mission statement and brand guidelines. They got down to the finer details, including approved fonts, color schemes and what types of brands and companies they wanted to work with.

“Be the drop that makes ripples throughout the world.”

Refined that summer, this quote graces Didomi’s stainless steel bottles. Their logo is a drop of water that flows into two fingers drawn in a symbol meant to represent hope. Each bottle retails for $28, and half of the profits from a single bottle provides 10 years of access to safe water to one person in need in Africa. 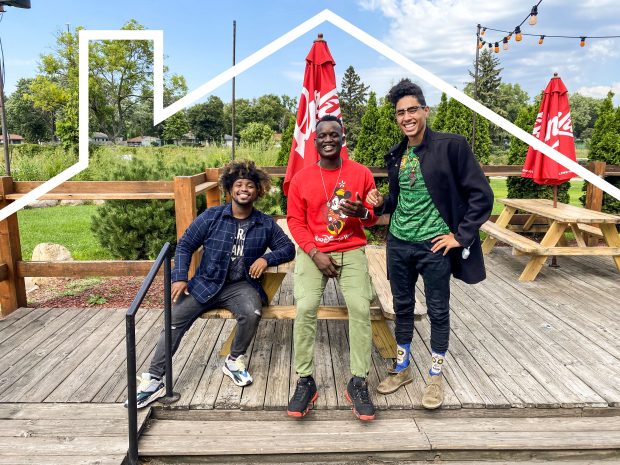 Bishop took a semester off during the 2020-2021 school year, which was marked by remote classes and uncertainty caused by COVID-19. Back home in New Mexico, he continued working on Didomi while auditing a social entrepreneurship course at Claremont McKenna College. Jibicho was enrolled in the same class, and both came out of it with tangible skills they would immediately put to the test.

Their hard work has led to large-scale partnerships with several institutions, including the University of New Mexico, Boys & Girls Clubs of America and the University of Wisconsin-River Falls. In Claremont, they have partnered with the Rick and Susan Sontag Center for Collaborative Creativity (known as the Hive) and the Pomona College Office of Advancement.

The latest partnership they secured in January is with George Washington University. Jibicho says they beat out larger reusable water bottle companies for the contract to supply the university with nearly 30,000 Didomi bottles that will be given to the students, faculty and staff to help nudge the community away from single-use plastic bottles. The partnership will allow Didomi to provide water access to almost 30,000 people in Ghana, Guinea and Uganda for the next decade.

Being an entrepreneur, says Jibicho, has made his coursework at Pomona seem easier. “I’m using my education as a means to make tangible change for people around the world. I’ve been pushed to follow my passion here and use my education for good.”

To date, Jibicho and Bishop say, Didomi has helped 50,000 people in Africa. The future is full of opportunity for the young entrepreneurs, who have no plans to stop. Jibicho has one more year at Pomona. Bishop, a senior who took a semester off during the pandemic, is graduating at the end of 2022 and plans to focus on Didomi’s social media presence and the stories of the company’s impact that will inspire people. Bility, who already graduated from the University of Wisconsin-River Falls, is boots-on-the-ground in West Africa, managing Didomi’s impact firsthand. Their hope is to see that one day everyone in the world will have access to all the clean, safe water they need.

“Lots of people have invested in our mission but no one is more invested than us,” Jibicho says. “We are committed to the work.”