Elisa Louizos ’96 and Roxanne Maas ’94 sang together in the Glee Club. Decades later, they reconnected in response to a rare medical condition.
July 25, 2022  by Marilyn Thomsen

The feeling Elisa (Mawer) Louizos ’96 noticed in her chest was odd but not entirely unfamiliar. It wasn’t quite pain—more a tightness, a bit like heartburn but not as sharp. “Bummer,” she thought to herself as she started the car and headed out with her ninth-grade son to pick up his books for virtual school. “Maybe I’m getting a flu kinda thing.” And maybe, she thought, it will just go away.

On the way home, though, Louizos had to pull over to the side of the road, violently ill. Composing herself, she made it into the house, stretched out on the sofa and tried to eat some of the ramen noodles her son brought her. The nausea passed, but the tightness in her chest remained, along with lightheadedness and a dull ache mid-back. She fell into a fitful sleep.

“When I woke up in the morning,” Louizos recalls, “I didn’t know what it was, but I had the sense that ‘something’s a bit off.’” Her doctor’s office told her to go to a local emergency room, where she was sure she’d be “wasting people’s time” and that “it was going to be a pain in the butt,” all the while surrounded by people with COVID-19.

Medical personnel who attended to Louizos ran some tests and blood work, then turned their attention to other patients. “Everything was coming back negative, negative, negative,” she remembers. “And then the final test was for a cardiac enzyme, troponin.” In an instant, Louizos’ life changed. “The doctor looked at me and said, ‘Well, it looks like you’ve had a heart attack. Where is your husband? I need to talk to him.’” 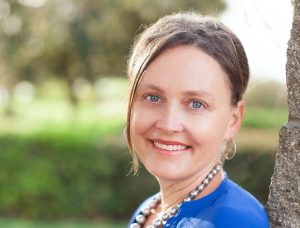 A second surprise lay ahead. Louizos—a therapist who was just 46, healthy, and with no family history of heart disease—had not experienced the typical heart attack caused by plaque in the arteries. Rather, she had survived spontaneous coronary artery dissection—SCAD—a tear in a cardiac blood vessel that disrupts blood flow to the heart. The condition was viewed as so uncommon that it was considered too rare to get research funding, according to Katherine K. Leon, who founded the nonprofit SCAD Alliance in 2013 to change that. Leon herself experienced a SCAD in 2003. Through grassroots fundraising, the organization supports research and the iSCAD Registry, the only such multicenter SCAD registry in the country.

Cardiologist Sahar Naderi, director of Women’s Heart Health at Kaiser Permanente San Francisco, is one of a small but growing number of SCAD specialists. In her practice she sees two to three SCAD patients a week, and she is a part of Louizos’ treatment team. Nearly all of her SCAD patients—98%—are women, mostly in their late 40s to early 50s. Naderi says those studying the condition believe it may be the leading cause of heart attacks in women under 50, as well as during pregnancy.

“We still don’t really understand the condition,” Naderi says. “There seems to be some perfect storm of hormonal changes that happen toward menopause that perhaps triggers, or at least is associated with, these events. We also know that mental and physical stressors long-term seem to play a role.” 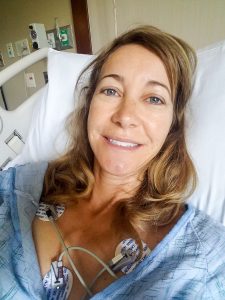 Eighteen months before Louizos’ SCAD, Roxanne (Ruzicka) Maas ’94 was taking a morning shower on the last day of vacation with her in-laws near Detroit when she began to experience chest pain. “I need to see my father-in-law,”’ she recalls thinking. (He is a retired physician.) Maas quickly dressed and gingerly went downstairs, hanging on to the banister to steady herself. “I couldn’t breathe,” she says. “I was sweating. I was dizzy and nauseous. I remember saying, ‘Maybe you should give me some aspirin.’”

As Maas was heading out the door on the way to the hospital, she suddenly vomited. She still doesn’t understand why, but after that, for whatever reason, “the pain and all the symptoms, like 95% went away. I was almost all better.” She went to the hospital anyway.

Maas was 47, healthy and active. Like Louizos, she had a husband and three children, along with a career as a genetic counselor. Nothing in her health profile would point to cardiac risk. But just as with Louizos, a series of tests showed elevated troponin. She had experienced a heart attack. After cardiac catheterization, her doctors concluded she had experienced a spontaneous coronary artery dissection, SCAD. The artery involved, says Maas, “looked like a frayed knot.” She flew home to California the next day, with the approval of her doctors, scared to death it might recur in mid-air.

When asked how it might be that two Pomona alumnae who sang in Glee Club together in the 1990s could both experience the same very rare heart attack just 18 months apart, Pomona Economics Professor Gary Smith suggests selective recall coincidence. Smith is the author of What the Luck: The Surprising Role of Chance in Our Everyday Lives. “Selective recall in general means that you remember selectively, often because it supports your prior beliefs, but also because it is so striking,” Smith explains. “Like a baby born at 7:11 on 7/11 weighing 7 pounds 11 ounces. If you predict, ahead of time, that a woman’s baby will be born at that time on that day with that weight, it would be astonishing if it came true. If you, instead, look at the birth records of the millions of babies born in the United States every year, it is utterly unsurprising that you will find a baby with an amusing combination of birth statistics. In any large set of data there are lots of coincidences that are memorable but meaningless.”

So it is likely that the two women’s experiences with SCAD might have remained as isolated, individual rare events were it not for a third Sagehen and mutual friend, Tori (Ashe) Erslovas ’95. “Last January I got a text message from Elisa. ‘I’m ok, but I had a mild heart attack,’” Erslovas relates. “When I talked to her and she told me what it was, I said, ‘That’s so weird. I know someone else that happened to—it’s Roxanne from Glee Club. Can I connect you?’”

Louizos says she dialed Maas’ number with “a mix of hopefulness and anxiety.” She was just a few days past her SCAD heart attack. “I was so scared. So scared. And I had so, so many questions.”

There was much for Louizos and Maas to discuss. Maas “was great,” says Louizos. “She had already been through that initial shock and was able to keep me grounded and provide hope.” Maas talked about how her life had, for the most part, kept on as it had been, minus rollercoasters and scuba diving, and she walks now more than she runs.

The current standard of care favors conservative treatment whenever possible, as SCADs often heal on their own, and that was the route Maas and Louizos took. Both women take a couple of medications and have instructions to keep their heart rate within certain safety parameters and to focus on mild to moderate cardiovascular exercise rather than activities such as weightlifting. “We were both glad we didn’t have babies or toddlers to lift anymore,” says Louizos. 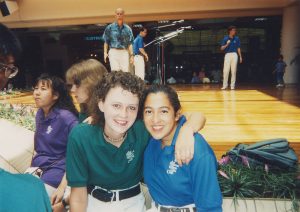 Elisa (Mawer) Louizos ’96 with Tori (Ashe) Erslovas ’95 during a 1990s Glee Club trip. Erslovas made the connection between Louizos and Roxanne (Ruzicka) Maas ’94 after each experienced a SCAD.

Having a heart attack in the prime of life, especially one that was so atypical, has left Louizos and Maas eager to make people aware of SCAD. Elisa is part of the SCAD Alliance’s iSCAD Registry. Both have sent their medical records to the Mayo Clinic for a virtual SCAD registry and are part of a supportive SCAD Facebook group.

Fear of a recurrence has not completely disappeared. The literature indicates that 20-30% of SCAD survivors, as veterans of SCAD often call themselves, experience a subsequent episode. “I might go weeks and even months without thinking of it, and then it’ll just sort of occur to me,” says Louizos.

“The scariest thing about this is that it came out of the blue,” Maas adds. “It’s not like ‘As long as I don’t run a marathon, I’ll be fine.’ It could totally happen again.”

‘Listen to your body’

Today, Maas and Louizos continue to be sources of support for each other. They now consider themselves “SCAD sisters.” Says Maas, “This unfortunate experience deepened a friendship we started 20-some years ago at Pomona College.”

Encouraging everyone, especially women, not to discount health warnings is important to them both. As Maas learned, there are different types of heart attacks that can occur even in people whose arteries are, as her cardiologist described hers, “crystal clear.” She emphasizes that “you really don’t want to ignore symptoms or think ‘That can’t possibly be a heart attack.’”

In January, Louizos posted a message to her friends on Facebook: “Today is the one year anniversary of my heart attack. I am feeling incredibly blessed by the support I have felt and so grateful that it was mild and the effects have been minimal.” And, she continued, “Just a reminder to listen to your body and take what it tells you seriously. Even if you are healthy these things can happen. And slow down once in a while and enjoy life. Stress does not serve us well!”

Maas fights back tears as she talks about two friends recently claimed by cancer. “The message I want to get out is enjoy your life. Appreciate your health and all the good things in your life. That’s what matters.”

Louizos, drawing on her own SCAD experience, concurs. “There’s an expiration date, for sure,” she says about each of our lives. “[Let’s] do all we can to make our experience on Earth as rich as we can. Take our health seriously. Listen to our bodies. And believe in each other.”