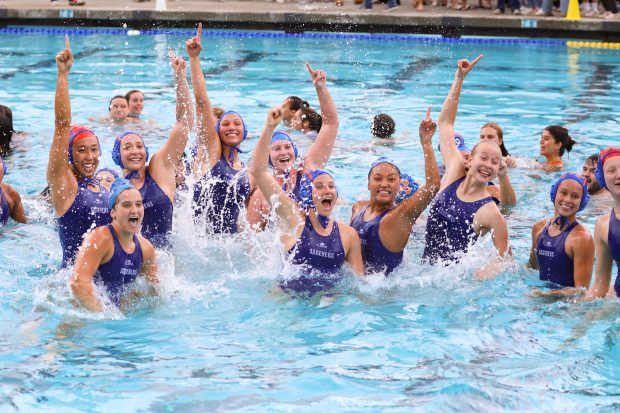 This time it was the Pomona-Pitzer women who took a celebratory leap into the pool after their 8-6 win over Whittier College in May gave them the national title. That completed a Sagehen sweep of the men’s and women’s Division III polo titles as some of the men’s players who won the title in December cheered on the women’s team from the packed stands.

“The crowd at Haldeman was part of what made this experience really special for our team,” says attacker Lucie Abele ’22. “We love hearing students, friends and family cheering us on and having fun, and that support makes games really fun and is super motivating.”

For years, top Division III water polo teams advanced to the NCAA’s single-division water polo tournaments only to be quickly eliminated by Division I powers. The sport’s national governing body decided in 2019 to create an alternative to the NCAA tournament, a final four for Division III.

“I thank USA Water Polo,” says Alex Rodriguez, professor of physical education and leader of a staff that coaches both the men’s and women’s teams. “I’ve been pretty fortunate to have a long list of amazing women play for me and carry me to these moments. This championship is different. A national championship is different. It feels amazing. It doesn’t feel like it used to feel to win conference and go to the NCAAs against Division I teams.

“I was surprised on the men’s side how much love we got for winning the D-III championship, and I expected the same thing,” says Rodriguez, whose resume also includes two trips to the Olympics as an assistant men’s coach. “I am truly touched with this opportunity.”

The Sagehen women were No. 1 in the preseason Division III national rankings, and they were No. 1 at the end. But the title felt like a long time coming for the team’s five seniors: Abele, Nadia Paquin ’22, Allison Sullivan Wu ’22, Katherine Cullen PZ ’22 and Jessy Nesbit PZ ’22.

The seniors credited determination as well as the contributions of freshman and sophomores, all playing their first college seasons. An underclassman came up big in the final, as Namlhun Jachung PZ ’24 scored two goals and added four assists for the Sagehens. The SCIAC Newcomer of the Year, Jachung also was selected as national player of the year.

Abele, the Sagehens’ leading goal-scorer during the regular season, and Abigail Wiesenthal ’24 each also scored two goals in the title game. Goalkeeper Zosia Amberger ’25, the SCIAC defensive athlete of the year, held off the Poets’ attempts to come back in the second half.

“This win felt really big for the seniors, especially after losing one-and-a-half years of water polo to the pandemic,” Abele says. “That was definitely a motivator for us, knowing that we had less time than other [classes] to make an impact and win a title. Winning D-III champs feels even more momentous to us because it’s four years in the making and a culmination of all our hard work.” 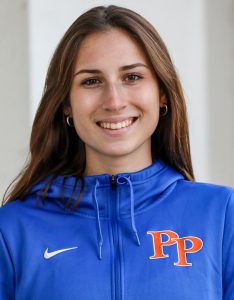 The road from Kyiv, Ukraine, to her senior year at Pomona College was paved with challenges for Maria “Masha” Lyven ’22. She arrived in a new country at 17 only to contend with a pandemic and then watch a war unfold at home. Despite those obstacles, she displayed remarkable resilience and became the SCIAC athlete of the year in women’s tennis. 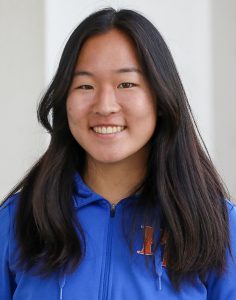 “Masha is one of the hardest-working people I know,” says Melisha Dogra PZ ’22, co-captain with Lyven of the Pomona-Pitzer women’s tennis team, which reached the Elite Eight of the NCAA Division III tournament. Though Lyven’s postseason run was curtailed by illness, teammate Angie Zhou ’25 rallied to a strong finish as national runner-up in the NCAA Division III Singles Championship. (See photo.)

When Lyven arrived at Pomona from Kyiv, she only recently had begun learning English. Studying at Pomona meant writing her papers in Ukrainian first, then translating them. She also had to interpret a new culture.

The women’s tennis team was her foothold. “It was really fun to be part of the team and be part of a group where everyone is committed to the same goal,” Lyven says. Her first year, she qualified for the NCAA singles tournament, and the team finished fifth in the country.

The following year, the season was cut short by the onset of the COVID-19 pandemic. Lyven couldn’t return home due to travel restrictions, so she stayed with a Pomona classmate for two months. Eventually she was able to return to Ukraine, but had to fly from Texas to Atlanta to Amsterdam to Belarus and then drive an entire day to Kyiv. 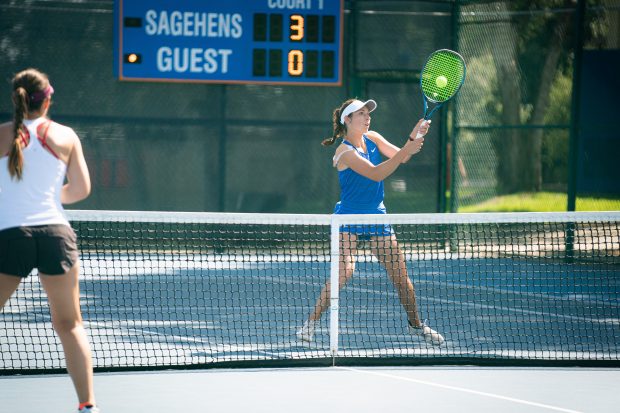 Maria Lyven on the court.

Lyven returned to Pomona last fall, only to injure her back and be sidelined until spring. But she “overcame that and really got herself going in a good place coming back,” says Mike Morgan, head women’s tennis coach and associate professor of physical education. At a national tournament in March, Lyven was serving “about half underhand, half overhand,” says Morgan. and “still winning.” “She has a level of quiet grit about her that you just don’t see every day.”

That tournament took place about a week after Russia invaded Ukraine. 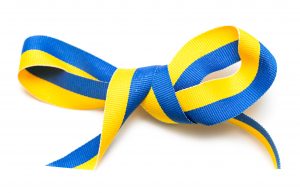 Lyven’s teammates wore yellow and blue ribbons to show their support, and later helped her organize a fundraiser for the Ukraine Global Crisis Relief Fund. By selling cupcakes, flowers and Ukrainian candies, Lyven raised about $1,600.

“The war has definitely affected me negatively,” she said this spring. “I’m constantly anxious about my family. I don’t know when I’m going to see my parents. It’s very scary, and you don’t know what’s going to happen. I’m very angry, sad, frustrated and anxious about not being able to be there.”

Her parents, who live in the suburbs of Kyiv, were faring OK, she says. This summer, Lyven, a computer science major, has an internship at Lyft in New York City before returning for her final semester at Pomona. The offer came as a tremendous relief, because she couldn’t return home due to the unsafe conditions. She is interested in UX (user experience) and product design as a career, combining the skills in creative thinking and problem solving that she has gained at Pomona.

Not only did Pomona-Pitzer women’s lacrosse sweep through the regular season and the SCIAC tournament undefeated, but the team also welcomed a new star: Shoshi Henderson ’25.

The Sagehens finished with the best record in the program’s history at 18-1, marred only by a postseason loss in the NCAA Division III Sweet 16 to Tufts, the eventual national runner-up, on the Jumbos’ home field.

Henderson quickly proved herself a game-changing player in her first season, breaking the NCAA Division III record for assists in a season with 90. She also set Sagehen records for points in a season with 132 and single-game assists with 13.

“Shoshi’s just a natural feeder, and she sees the field really well and works really well with her teammates,” says Coach Sarah Queener. “You can tell if you watch our games that when Shoshi gets the ball, you see everyone looking to cut. And that’s for a reason.” 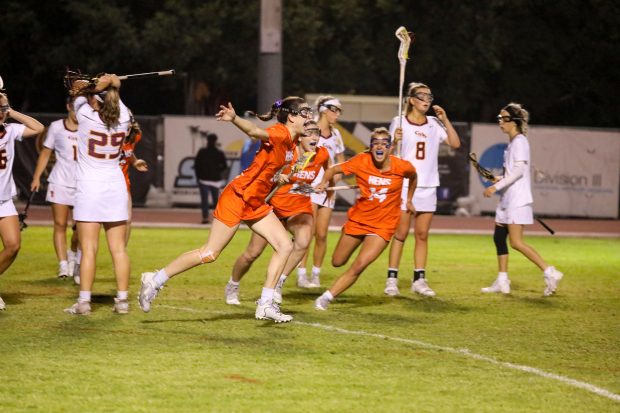 Shoshi Henderson ’25, left, celebrates after scoring the winning goal in overtime against Claremont-Mudd-Scripps.

Kate Immergluck ’22, a “super-senior” who took a pandemic gap year to have the opportunity to play a final season, agrees.

“Shoshi has vision like nobody else,”
says Immergluck, a third-team All-American midfielder and the SCIAC Defensive Player of the Year. “I feel like when I’m playing offense and Shoshi’s feeding, she feeds the ball before I even know that I’m cutting. She knows the route before it’s even there. She can just anticipate the movement of the offense and I think that’s really special. It facilitates—well you can look at the stats, but it facilitates the way that our offense has developed.”

Popovich Raises the Bar in NBA

Pomona’s disproportionate influence on the NBA coaching ranks continued this season as Gregg Popovich, coach of Pomona-Pitzer’s Sagehens for eight seasons early in his career, set the NBA record for career victories as a coach. The San Antonio Spurs coach finished his 26th season with 1,344 regular-season wins in his career. Popovich also has won five NBA championships as a head coach, tied for third in NBA history—and a lofty goal for Mike Budenholzer ’92, the former Sagehen player who is coach of the Milwaukee Bucks and won his first NBA title in 2021. Finally, both coaches in the 2022 NBA Finals—the Golden State Warriors’ Steve Kerr and the Boston Celtics’ Ime Udoka—played for Popovich and later served as his assistant coaches, Udoka with the Spurs and Kerr at the Tokyo Olympics. 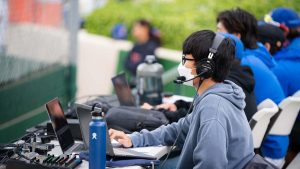 Before the pandemic, online broadcasts of Sagehen Athletics were a straightforward stream of the game. Now broadcasts might include multiple camera angles, instant replays, graphic overlays and play-by-play commentary.

The secret weapon behind these improvements? Student workers.

It’s a win-win situation. Those watching—including far-away family and friends of the athletes—have a vastly enhanced viewing experience, and students at Pomona gain valuable work opportunities.

Director of Athletics Communications Sam Porter, who oversees the broadcasts along with Assistant Director Aaron Gray, likes for students to work every position, in case the crews are short a person at any given game.

Maya Nitschke-Alonso ’23 didn’t have any prior camera experience. But she has settled into the role of “camera two,” which she explains “is the one that will zoom in on the player who’s taking free throws or backpedaling after a shot, the coach getting hyped up, all that fun stuff.”

Alex Chun ’24 hopes to make a career of sports commentary and is gaining plenty of experience.

All home events are broadcast, with the exception of cross country, golf, and track and field, which are more difficult to film.

To watch live and previously recorded broadcasts, go to sciacnetwork.com/sagehens/.