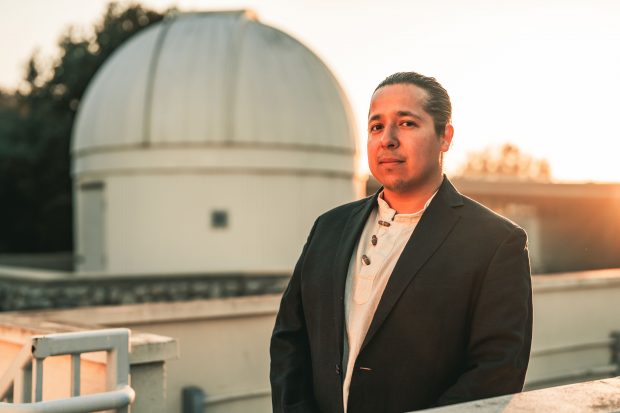 The discovery of galaxies with little or no dark matter is perplexing to scientists and challenges existing notions of how galaxies form. In a paper published in Nature Astronomy in February, a team of researchers led by Jorge Moreno, assistant professor of physics and astronomy, shared evidence they have found that may explain this baffling observation. Scientific American featured Moreno in a podcast about the work in April.

“For 40 years, astrophysicists have believed that all galaxies have dark matter,” Moreno explains in a campus interview.

That hypothesis was challenged in 2018, when Shany Danieli at Princeton University, who is the second author of the new paper, and Pieter van Dokkum of Yale published their finding of a galaxy in the real universe that lacked dark matter. A second such galaxy was reported in 2019. Astronomers use the term “real universe” to differentiate between what is seen in physical observation and what is found through computer simulation.

“Their discovery posed a huge challenge to the dark matter model of galaxies,” Moreno continues. “Many astrophysicists were suggesting that maybe we need to get rid of the idea of dark matter. Maybe we even need to modify the laws of gravity.”

Moreno took a sabbatical leave in 2020-21 to dig deeper into the challenge posed by these galaxies that lacked dark matter. He drew on his expertise in creating galaxy simulations and using supercomputers to model galaxy formation. Joining in the worldwide effort were astrophysicists from Princeton, UC Irvine, Caltech, the University of Zurich and other institutions.

The simulation modeled evolution over billions of years in a swath of the universe that was 60 million light years across. In it, the researchers identified seven galaxies lacking dark matter. 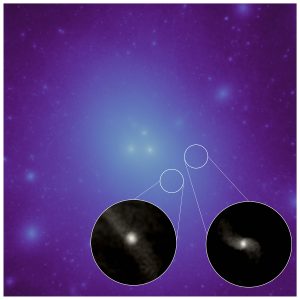 “What we found is that these galaxies initially had a lot of dark matter, and they had a lot of gas,” says Moreno. “But they fell into bigger systems. What we discover is that to become a galaxy without dark matter, it must interact with a galaxy that is a thousand times bigger than it is.”

Moreno drew on his identification with Indigenous peoples to name the galaxies found in the simulation. With the help of Doug Ingram, a Cherokee who teaches in physics and astronomy at Texas Christian University, Moreno obtained the permission of Cherokee leaders to give the galaxies the names of seven Cherokee clans: Bird, Blue, Deer, Long Hair, Paint, Wild Potato and Wolf.

Moreno finds a parallel in his Indigenous ancestry. Growing up in Mexico and the United States with a blossoming interest in mathematics, he didn’t see many scientists of color with whom he could identify, and navigating the power structures of academia was often challenging.

Sometimes Moreno felt excluded, and more than once he was mistaken for a janitor rather than a physicist. But, he says, “I had many mentors who believed in me. Sometimes they were warm, and sometimes they were harsh. But both were helpful in my growth to be the best version of myself, not to give up.”

As a theoretical astrophysicist and professor, Moreno honors his roots by investing in the success of the next generation of scientists of color. “I don’t want them to learn science,” Moreno says. “I want them to become scientists.”

While Moreno challenges all of his students to grow academically, he is invested in helping them find more than answers to questions in physics. He aims to help them discover, as he has, their place in the world of science. “For me, the scientific endeavor has been one of the most joyful things,” he says. “The message I want to send to my students is one of hope: ‘You belong.’”