Fossils on the Cover 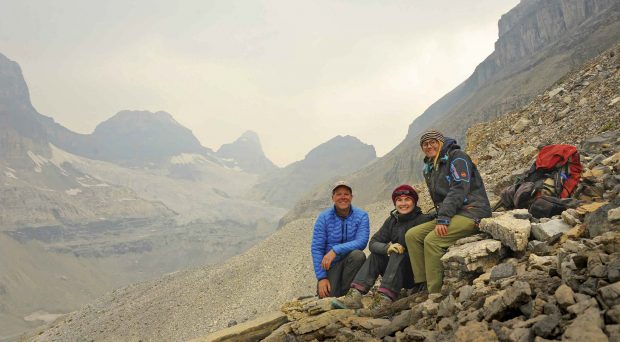 The alien-looking fossils unearthed by a team of scientists co-led by Pomona College Professor of Geology Robert Gaines were the subject of the cover story in the November 2018 issue of Science. 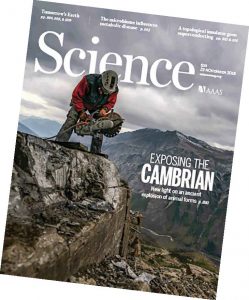 The article, “Cracking the Cambrian,” takes readers to Kootenay National Park in Canada and the fossil-rich sites that Gaines and the team discovered in 2012. The sites are home to Burgess Shale fossil beds where more than 10,000 specimens, including unfamiliar and new animals, have already been found by the team. The animal fossils are from the Cambrian period, which saw a sudden explosion of animal life, and offer an increased understanding of early animal evolution on Earth.

“More than 80 percent of diversity of life leaves no fossil record, but here we have fossils that offer a remarkably complete picture during this ‘pop’ in evolutionary history,” says Gaines. The fossils, which show soft tissues, including eyes, muscle bands and gills, have been found along a 10-mile swath of what was once sea floor, now located high in the Canadian Rockies.

Among the unique finds this past year were new fossils that the researchers nicknamed “spaceships” because of their sleek shape. The largest of these was dubbed “the mothership” (naturally). “These animals were relatively giant predators of the Cambrian seas, ranging up to one meter,” Gaines says. “They were swimmers with giant raptorial claws at the front of the head, just in front of the mouth.”

Gaines began working in the area in 2008 and has been back every year since, with the exception of 2011. Though the weather is volatile, the terrain steep and rugged, the grizzly and black bears abundant and the living conditions primitive, he plans to keep going back.

“I’m living my 5-year-old self’s dream,” he says. “My mother brought me a trilobite from a trip when I was a boy, and immediately my enthusiasm for dinosaurs faded. I was intrigued by the idea of this much deeper past and the early history of complex life on Earth.

“The Burgess Shale is perhaps the most important fossil site in the world and is on every paleontologist’s bucket list. I still can’t believe that I am actually working here. And the opportunity to make paradigm-shifting contributions through the discovery of this entirely new fossil area in the Rockies, rich with new and unexpected animal forms, is incredibly rewarding.” 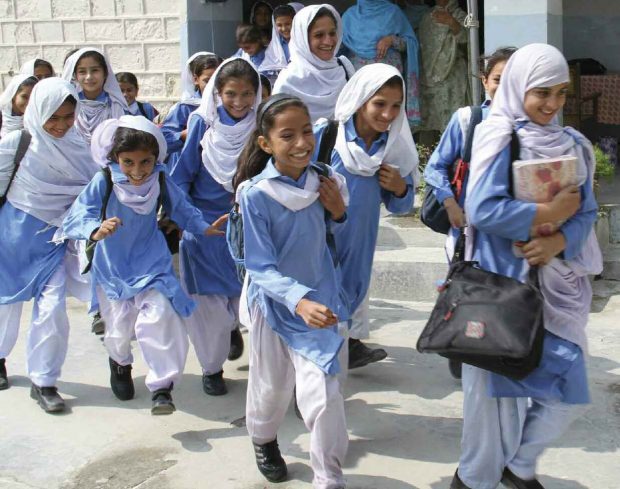 Pakistani children on their way to school.

For more than a decade, Stedman-Sumner Professor of Economics Tahir Andrabi and a team of researchers have been conducting economic surveys on education in Pakistan’s Punjab province. They’ve tested about 35,000 primary schoolchildren in math, language, civics and other subjects and distributed report cards to families. For illiterate parents, they’ve explained the results at village gatherings and town meetings.

The results have echoed throughout the educational system in the region.

“Giving Pakistani families information improved their welfare as consumers of education,” says Andrabi. “It lowered the fees private schools charge and induced lower-quality private schools to improve their test scores. Public schools responded to this information by raising their quality and increasing their enrollment. We are also finding that these effects persist in these villages even after eight years.”

The surveys also exposed some problems, including the difficulty of retaining teachers and the need for better training and better resources.

For Andrabi, education is a “kind of ecosystem. It has teachers, textbook providers, policymakers, regulators. I can name 20 different actors,” he says. “Our job as researchers is to identify the frictions in all these relationships and to think about the barriers to innovation, so people can think about their solutions to their own problems.”

The initial problem for policymakers, says Andrabi, “had been how to get kids in school, particularly girls and the rural poor. As more children entered schools, construction increased and researchers started to notice that it was not enough. The demand for education, for women, for girls, the aspirations parents have for their children are very high. So the question now is how to respond to that need.”

Andrabi has been part of that response, traveling around the world and collaborating with colleagues in education and economics to “reimagine” a school of education. Invited by Pakistan’s leading philanthropist and a founding trustee of its largest private university to work on the project, Andrabi initially intended to lay the groundwork for the new school.

Instead, he is taking a sabbatical to become the inaugural dean of the Lahore University of Management Sciences School of Education, working with eight faculty members and 40 students in a master of philosophy program on educational leadership.

“Any problem that you can think of in the world,” he says, “improving education is going to help.” 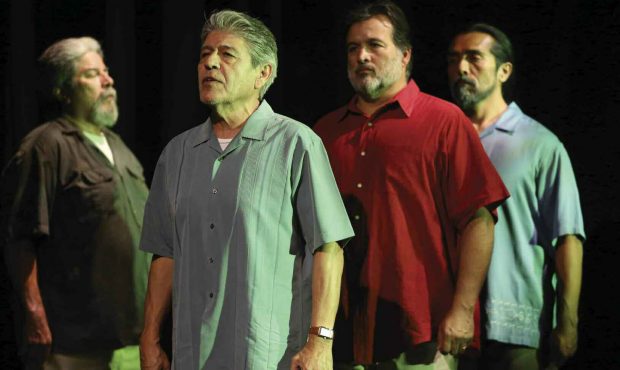 Tomás Sandoval Sr. (second from left) in a scene from Ring of Red: A Barrio Story.

Stories of patriotism, sacrifice and survival are important themes in the lives of many Chicanos who served in the Vietnam War. And bringing some of those stories to the public through theatre has been a multiyear project for Professor of History and Chicano Studies Tomás Summers Sandoval, who recently staged a new play at the Bootleg Theater in Los Angeles based on the experiences of Chicano veterans.

Adding a personal note to the work was Summers Sandoval’s father, Tomás Sandoval Sr., who joined the production as an actor.

Based on oral histories collected by Summers Sandoval and his students over a period of five years and written as interwoven testimonios—testimonial monologues—Ring of Red: A Barrio Story features stories of post-traumatic stress disorder, addiction, family love and friction—and what it has meant for this generation of Chicanos to live with the scars of war.

The play was directed by Pomona College lecturer and alumna Rose Portillo ’75.

“Chicanos are generally misunderstood as a people,” says Summers Sandoval. “The media often portrays us as a threat, but Chicanos have been interwoven into the U.S. story for a long time, and we have given a lot to this country.”

History and the Court 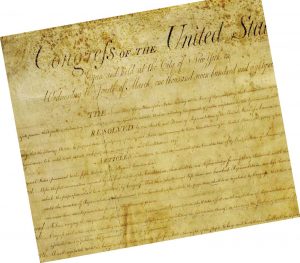 A copy of the United States Bill of Rights

For Amanda Hollis-Brusky, the 2008 Supreme Court decision about an individual’s right to own a gun is a story about the lawyers, activists and law students who laid the groundwork for a radical new interpretation of the Second Amendment.

“For 150 years, courts interpreted that first part of the clause, the well-regulated militia, as limiting the scope of the right to keep and bear arms,” says Hollis-Brusky, associate professor of politics and author of Ideas with Consequences: The Federalist Society and the Conservative Counterrevolution. “Until the 1970s and 1980s, scholars who were for a robust Second Amendment were lamenting the fact that courts had limited the right and had accepted a lot of regulation because they were putting too much emphasis on the collective, the militia.”

The District of Columbia vs. Heller, a case challenging strict handgun regulations in Washington, D.C., initiated what Hollis-Brusky describes as a two-step process necessary for the court to change a law. “The first thing you need is at least five justices who agree with you. It’s a necessary condition, but it’s not sufficient,” she says. “Those five justices need to have the legitimacy of outside legal scholarship that justifies their opinion.”

The scaffolding for the 2008 case, says Hollis-Brusky, was provided by the Federalist Society, home to conservative and libertarian legal scholars.

“We talk about constitutional principles, but I think very few on the left or the right adhere so steadfastly to those principles,” says Hollis-Brusky. “The terms of the debate— ‘Are you an originalist or are you a living constitutionalist?’—have shifted. You still need to look to history, but how do you use that history and how do you take into account contemporary circumstances? Those are the big driving questions.”

In the classroom and in her work with students on research, Hollis-Brusky says she sees the next generation of activists. “There is less cynicism and more interest in being strategic in how they engage with the system. One of the things I like to tell them in the post-2016 world is that this is a time of great political possibility, for better or for worse. Things we never imagined would happen are now happening. You have to throw out all the rules about what we ought to expect, and that opens up a lot of possibilities for people who want to reimagine the way we are.”

The Shape of the City 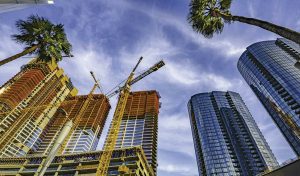 Cranes above a Los Angeles skyline.

Why are some areas redeveloped, while others are not? What roles do zoning and density regulations play? These are some of the questions Associate Professor of Economics Bowman Cutter is trying to answer by combining zoning and property data with Geographic Information System (GIS) technology to create redevelopment maps of parts of Los Angeles County.

“People haven’t linked the property records over time like this before,” says Cutter, an environmental economist and an expert on urban land use. Funded by a Haynes Foundation faculty fellowship, his work will generate a dynamic map to help policymakers and stakeholders visualize redevelopment patterns over time.

“I’d like to look in a much more detailed way than anybody’s done, property by property, on how these density restrictions affect what you build and when you build,” Cutter says. “What I’m trying to say is, if we had different regulations, would the shape of the city be different?”