How to Outsmart the Next Wildfire

How can you save your home from a wildfire? It starts with thinking ahead.
February 4, 2019  by Staff

When Sia ’65 and Aim ’64 Morhardt decided to build their new home in the hills above Santa Barbara, California—on a site where a previous home (not theirs) had burned to the ground—they knew they had to do more than simply cross their fingers and hope for a wildfire-free future. So they decided to outsmart the fire before it starts. Completed in 2011, the house incorporates every available and cost-efficient measure they could find to minimize the prospect of another disaster, plus a few that they invented themselves. “We haven’t been tested by fire,” Sia says. But the Morhardts sleep better at night, knowing that they’ve made their house as fire-resistant as they could possibly make it. 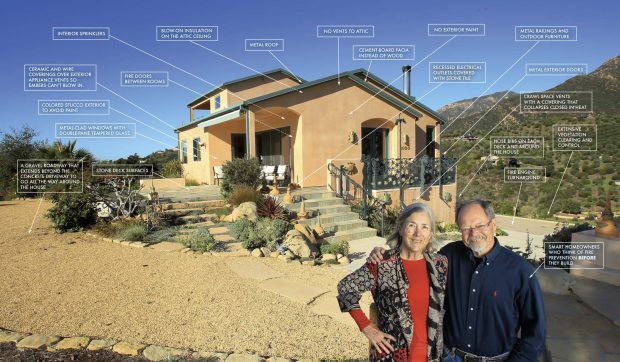