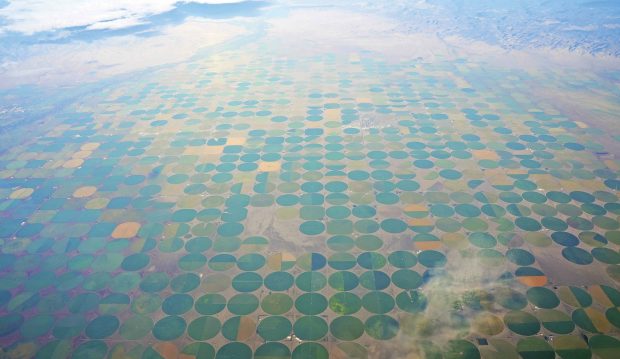 You cannot see an aquifer. What you can see, however, is the impact of these underground water systems, as revealed in this artful image of the vast irrigated fields above the Ogallala Aquifer, which underlies 174,000 square miles of the Great Plains. W.M. Keck Professor of Environmental Analysis and History Char Miller—one of the co-authors of the third edition of Ogallala: Water for a Dry Land (Nebraska, 2018)—describes monstrous roaring pumps that suck the ancient water stored deep beneath these green-hued circles into an array of pipes to irrigate sorghum, corn, cotton and wheat, or to nourish livestock.

“The massive Ogallala, which runs from Wyoming to Texas, has been one of the world’s most productive aquifers, not least because it has been crucial to the growth of the global food system,” he explains. “Yet it is an open question how long it can continue to sustain its vital role, a question that drove John Opie, Kenna Lang Archer and me to co-author this book.”

“Although the book encompasses half a billion years of the region’s history,” Miller adds, “its next-to-last sentence is perhaps the most unsettling: ‘The clear, fresh waters of the Ogallala are being gulped down at 10 times their trickling pace of replacement.’ That demand is accelerating with the exponential growth in the world’s population. By 2050, the Ogallala may be exhausted.” 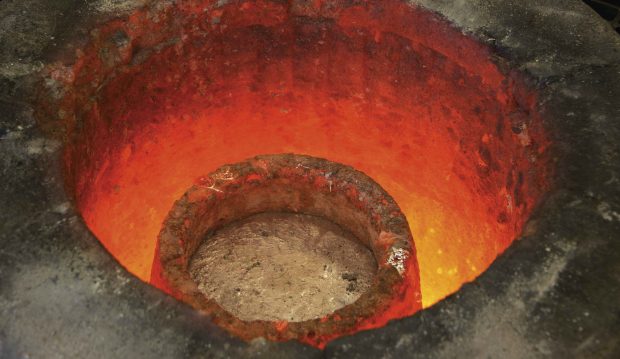 To describe the process of casting in metal, Professor of Art Michael O’Malley offers a paraphrase of Thomas Edison’s famous remark about genius: “It’s 5 percent inspiration and 95 percent just hard work.” The metal pour itself, he explains, is one of the last in a long series of intricate steps, each involving a great deal of painstaking labor. In fact, he says, “I often think of casting as a finishing process, in the same way I think of painting something made of wood.”

The molten aluminum in this photo was to be cast as the legs of a conference table, part of a project intended to engage students in personalizing Pomona’s new Studio Art Hall when it opened a few years ago. “We wanted to connect a teaching experience with a lived experience with future objects,” O’Malley says. “So the idea was to build as much furniture as possible.”

The project grew out of O’Malley’s longtime interest in the narratives encapsulated in the built environment. “Why does the world look the way that it does?” he asks. “And what is it that we can do to, perhaps, populate the built environment with objects that have alternative narratives and signal different kinds of values, different kinds of positions in the world?” 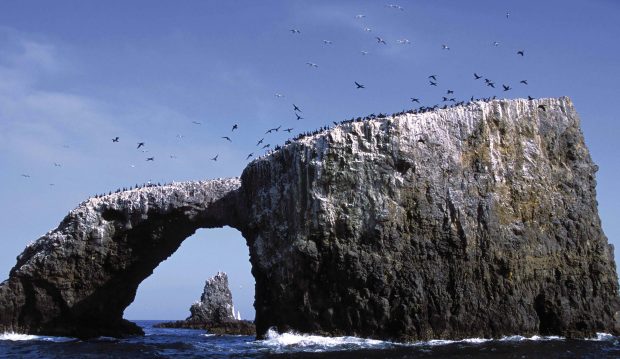 Fresh out of college, Professor of Biology Nina Karnovsky took a job studying seabirds—and she was hooked for life. “Seabirds are sentinels of what’s happening in the ocean,” she says. “There are so many stories about human impacts on bird populations; there’s climate change that is changing the food web, the temperature, the winds. And the birds are responding.”

Over the years, she’s studied penguins in Antarctica, little auks in the Arctic and, closer to home, seabirds on the Channel Islands. “We’ve studied the prey availability and bird distribution around Santa Barbara Island,” she says. “We’ve done cruises with students where we were watching the birds, doing the net-tows, the physics measurements and the chemistry. And I’ve taken students back to the islands for field trips as well, including Anacapa.”

Anacapa Island (pictured) is home to one of the great success stories in conservation. In recent years, the careful elimination of invasive, egg-eating rats on the island has brought the Scripps’s murrelet out of the shadow of extinction. Last year, Karnovsky took her Advanced Animal Ecology class to Anacapa to participate in an accompanying effort to restore native plants. Unfortunately, she says, “there aren’t many success stories like that in island ecology.”

Cold Case from a Hot Planet 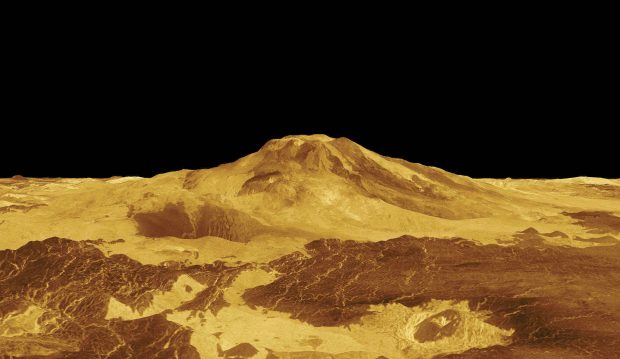 This NASA image of Maat Mons, one of the largest volcanoes on Venus, was created from radar data gathered by the Magellan spacecraft as it orbited the seething hot planet. That was a quarter-century ago, but the total amount of data Magellan sent back during its four-year life was so vast that scientists like Eric Grosfils, the Minnie B. Cairns Memorial Professor of Geology, are still digging through it to make new discoveries.

“One of the primary things that we’re doing right now is trying to understand how volcanoes grow and evolve,” Grosfils says. “For a long time we’ve been looking at what controls where magma goes beneath the volcano—why it goes straight up and erupts at the summit, for example, or goes out along a rift zone. The eruption that just happened in Hawaii underscores the fact that even at one of the most heavily studied and instrumented volcanoes in the world, we still get surprised all the time.”

Studying volcanoes on another planet, Grosfils says, is a good complement to studying them on the Earth, partly because it offers a glimpse of how volcanoes evolve in different environments, but also because the volcanic record in a place like Venus is so pristine. “Venus is not subjected to lots of erosion,” he explains. “It doesn’t have oceans that obscure the surface. For reasons like these, there is a pretty complete record of their evolution preserved for us to see.”

Grosfils says fresh discoveries still lurk in those mountains of Magellan data. For instance, last summer, two students in his lab—Brooke Carlson ’20 and Harvey Mudd student Gabi Bellino ’19—used the data to map in detail, for the first time, two large volcanoes, Dzalarhons Mons and Kali Mons. The result? “Among other things, our mapping revealed that the size of each volcano is two to five times what it was understood to be before we mapped,” Grosfils says, “and now we know the sequence of events that built each volcano from the ground up.”