Eric Cooper ’18: How to Win the “Heisman of Physics”

How did Eric Cooper ’18 win the highest honor for undergraduate physics students? You might say it all began with a Frisbee.
February 4, 2019  by Mark Wood 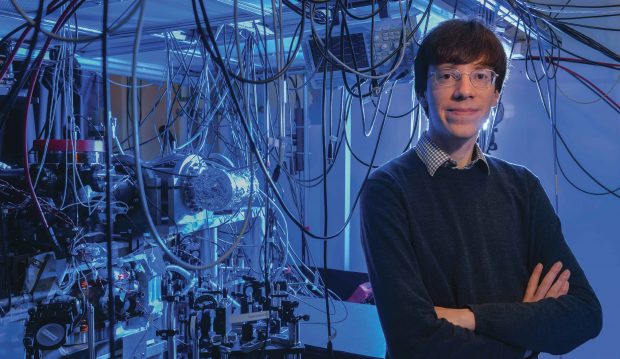 A few months after moving on to graduate school at Stanford University, physics major Eric Cooper ’18 learned that he’d won what Associate Professor of Physics and Astronomy Dwight Whitaker describes as “the Heisman Trophy of physics.” Cooper won the American Physical Society’s LeRoy Apker Award for his work as part of Whitaker’s lab team, using high-speed video to measure the extraordinary seed dispersal rotation rates of certain plants. Reaching rates as high as 1,660 rotations per second, they are among the fastest in nature. Mathematical modeling of the seeds’ flight showed that rotation rate, vertical orientation, low drag and tight spin combine to launch those seeds at distances of 20 feet and more. The Apker Award—conferred each year upon two undergraduate students, one from a Ph.D-granting institution and the other from a non-Ph.D.-granting institution—is the highest national collegiate honor a physics student can receive. To understand the path Cooper followed on his way to this achievement, put yourself in his shoes.

Grow up in Seattle, Washington, the son of two science professors, and get your first electricity set at the age of 5. Become fascinated with building little robots (including a mini Mars rover) with Lego Mindstorms from the age of 8 on.

Start playing the cello at age 10 and keep playing through middle school and high school. Do so in part for the same reason you’re attracted to research—because it allows you to work alongside others while pursuing long-term goals and building incremental skills.

In middle school, attend a summer program on rockets and robotics, where you become intrigued by the mathematics of energy and momentum. Take a particular interest in air resistance and decide you want to do something about it for your next science project.

Join the Frisbee team at school and become fascinated with the physics of flying disks. Teach yourself to use video tracking techniques in order to win the eighth-grade science fair with a project examining the aerodynamics of a spinning Frisbee.

In high school, branch out into nonscientific disciplines with classes in philosophy, comparative government and politics. Realize you want to go to a college where you can do science while also exploring other interests.

Pick Pomona because it checks all your boxes, including a broad curriculum, strong programs in math and physics and the chance to do research. An opening for a cellist in the orchestra and appealing food options seal the deal.

As a first-year, get your first taste of college physics in Whitaker’s Spacetime, Quanta and Entropy class. Get an invitation to work in Whitaker’s lab, in part because of your experience with video tracking and the aerodynamics of rotating bodies from your Frisbee project.

After your first year, do a summer research project at the University of Maryland, College Park, in which you use computer code to track the location of sand grains in three dimensions. Bring that code back to Pomona to track flying, spinning seeds.

As part of Whitaker’s lab team, gather a lot of data during your sophomore year and spend your junior year analyzing it for a paper of which you’re listed as an author, published in the Journal of the Royal Society Interface. Expand upon this for your senior thesis.

Learn that you are one of three finalists in your category for the Apker Award. Give a nerve-wracking 30-minute presentation before the selection committee in Washington, D.C. Learn after starting at Stanford that you won.