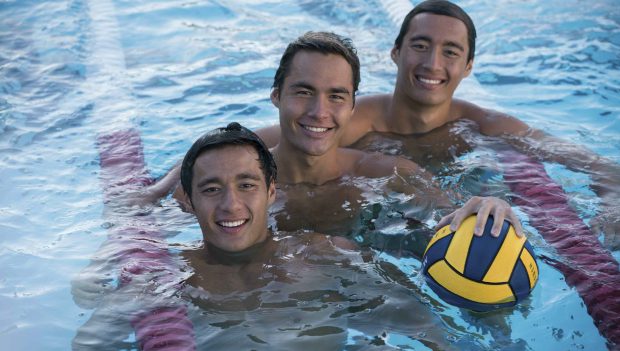 Brothers Sam, Noah and Ben Sasaki have a sixth sense for each other in the pool. —Photos by Lushia Anson ’19

Lining up for introductions on the pool deck before Pomona-Pitzer water polo games, the Sasaki brothers fall neatly into place.

“We’ve been asked if we’re triplets,” says Noah, a sophomore who is two years older than fraternal twins Ben and Sam, both first-years.

In the pool, it seems like they are everywhere. As one frustrated opponent said as he got out of the water after trying to defend against one of the Sasakis during a summer tournament, “It’s like there are two of him out there.”

“Dude,” somebody had to tell him, “they’re brothers.”

The Sasakis helped Coach Alex Rodriguez’s Sagehens to an undefeated record this season in the Southern California Intercollegiate Athletic Conference and a top-20 place in a ranking led by Stanford, UCLA and USC.

“That’s one thing in this sport—there’s no separation between Division I, Division II and Division III. We get to be in the pool with all the others,” Noah says.

After winning the SCIAC tournament title over Claremont-Mudd-Scripps on Nov. 18, Pomona-Pitzer earned the right to compete in the NCAA postseason with the sport’s powerhouse teams, stocked with future Olympians. After losing to Long Beach, 12–5, the Sagehens ended their season with a 24–9 record and shifted their goals to next season.

One of the brothers’ goals is to get past the opening round, known as the play-in games, where the Sagehens have lost the last three seasons, and into the final six-team bracket for the NCAA championship. “I know my aspiration is to be in the top 10, regardless of being Division III,” Ben says.

Pomona-Pitzer had upset victories this season over No. 10 UC Irvine and No. 17 Princeton, and trailed No. 5 UC Santa Barbara by only one goal in the third quarter of a loss. The leap to competing with the size and strength of the top teams is a big one, however.

It was Noah who led the brothers into water polo, when his mother suggested he try the sport after he took to surfing as a youngster and clearly loved the water. Ben and Sam followed him from a club team in Irvine to Orange Lutheran High School, where they won a California Interscholastic Federation Division I title in 2016 before Noah led the way to Claremont. 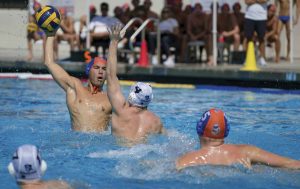 Sam, a left-hander who is prized in water polo the way a lefty pitcher is prized in baseball, had his eye on bigger schools at first, such as UCLA. But Ben didn’t hesitate to choose Pomona. “I know I didn’t want to be separated—not from both of them. It just would have been weird,” Ben says.

Noah recruited Sam hard—and hosted him on his official visit—persuading Sam that the chance to play a key role on the team and get a Pomona College education was worth it. Noah is a media studies major with an interest in sports journalism who has written about Sagehens football for The Student Life. Ben is pointed toward economics and a career in private equity management, and Sam is considering philosophy, politics and economics and perhaps law school.

In the pool, the Sagehens are reaping the benefits of the brothers’ close relationship and sixth sense for each other in the water. Noah often looks for his twin brothers on the counterattack.

“Ben and Sam are both very fast. I’d say faster than I am,” he says. “I know where they’ll be in the pool.”

Their Pomona-Pitzer teammates learned that the hard way in early practices and scrimmages.

“It seemed like the twins were up on the counterattack every time,” says Rodriguez, the Sagehens coach. Frustrated, he says he yelled at the defense about Ben and Sam being open. A teammate quickly responded: “He said, ‘They are Sasakis. They are all fast and they all play hard,’” Rodriguez recalls. “I thought it was a great compliment.”

The twins have a special connection, and because they often play on opposite sides of the pool—Sam, the lefty, on the right side and Ben on the left side—it’s not uncommon to see one of them find the other with a long pass. “It makes me feel good every time I set up my brother for a goal,” says Sam, who led the team with 44 goals and 41 assists during the regular season. Ben scored 26 goals, and Noah, who plays more of a defensive role, scored 11.

Together, they turn Sagehens water polo into a family gathering. Their parents, Russ and Jennifer Sasaki, are part of a large group of parents who turn up at almost every game, and Rodriguez says he “cannot say enough” about them. “Russ helps video games for us when we don’t have a student worker available, and both parents help stat our games as well,” he says.

With three sons on the team—and daughter Lexi studying in Scripps College’s postbaccalaureate premedical program after graduating from UC Santa Barbara—Jennifer and Russ did what only made sense: They packed up their home in Irvine and moved to Claremont.