There Ought to Be a Law

Going home to care for her parents seemed like a BIG step back for Cristina Garcia ’99, but it proved to be a big step forward for one of California’s most passionate lawmakers.
October 25, 2016  by Carla Guerrero ’06 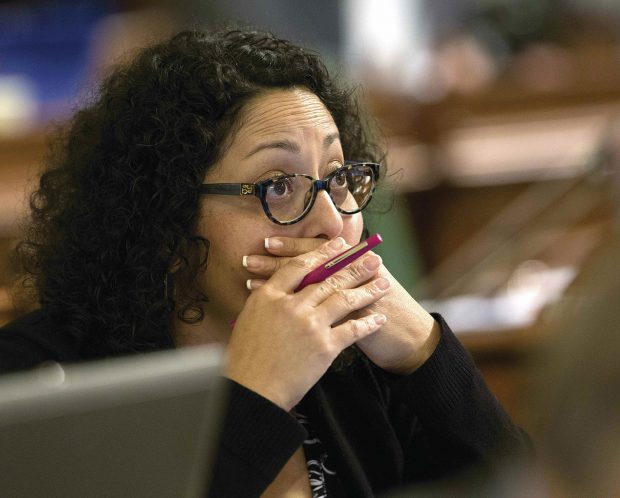 Assemblywoman Cristina Garcia ’99 watches as votes are posted for and against her bill, AB1561, to repeal the sales tax on tampons and other feminine hygiene products. The bill passed but was vetoed by Gov. Jerry Brown. —AP Photo/Rich Pedroncelli

When Cristina Garcia ’99, then a high school math teacher living in Pasadena, was nominated by her siblings to move back to Southeast Los Angeles to care for their ailing parents, she didn’t think twice about taking on her new role as caregiver. Moving back home when her family needed her was an easy decision. Garcia says she’d do it again in a heartbeat.

But resettling less than a mile away from her parents’ home, she suddenly found herself back in the heart of Bell Gardens, the city she thought she had left for good.

When she was growing up, her idea of success had followed the same age-old formula familiar to many: Leave your poor hometown, make something of yourself and never look back. And she had done exactly that. After excelling in high school in the mid-1990s, she had left her hometown, known for its high teen pregnancy rates and polluted air, for the tree-laden and book-filled campus of Pomona College. With a double major in mathematics and politics in hand, Garcia thought she was set for life.

“I taught math for 13 years, and I had a pretty amazing life. I got to teach at the high school level and the college level,” she says.

Now she was right back where she had started.

Today, sitting in her district office that bears her current title, California Assemblymember, she recalls the sense of failure that soon enveloped her upon her return home just a handful of years before.

“We had been taught that success was leaving and never coming back to these communities,” she says. “And so I felt like a failure, in a way, coming back and giving up my comfy life that I had.”

It took a heart-to-heart intervention by her younger sister to help her snap out of it. “She said, ‘You have leadership skills and you have a responsibility,’’’ recalls Garcia. “I was like, you know what, I’m going to start going to council meetings and start asking questions, and eventually that led me to ask more questions.”

Garcia started by attending Bell Gardens’ city council meetings, trying to get information about the city budget and expenses. She hit a lot of roadblocks and found disturbing practices. Next door, in the City of Bell, residents were asking similar questions, trying to figure out why their taxes were so high. They, too, were hitting a brick wall, with no answers and no accountability from their elected officials.

Then in 2010, the Los Angeles Times broke one of the biggest corruption scandals to rock the state in recent memory. At the heart of it was rampant graft and theft of city coffers by a cohort of City of Bell officials. Outraged, Garcia joined with other local activists to form BASTA (Bell Association to Stop the Abuse).

“I saw it as an opportunity for change for the whole Southeast [Los Angeles], since the problems that plague these cities are all very similar. A lot of the dysfunction I saw in Bell Gardens was present in Bell and other surrounding areas,” says Garcia.

Largely thanks to the work of BASTA, six Bell officials were recalled. Eventually, they were brought to trial on corruption charges and are currently serving prison sentences. Through this yearlong process, Garcia’s resolve for change never wavered. 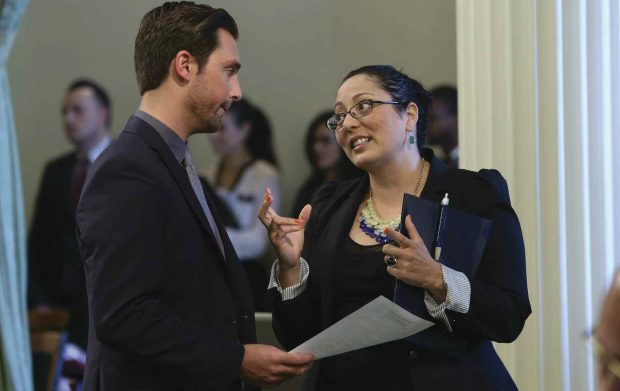 Assemblymember Cristina Garcia ’99 in conversation with Assemblyman Ian Calderon of Whittier just before the Assembly unanimously approved her bill, AB1673, which bans lobbyists from hosting fundraisers at their homes and offices. —AP Photo/Rich Pedroncelli

“Failure was never an option, because failure was not an option for my community. I had a sense of responsibility to take our communities back. I thought I’d be there for three weeks, but it was over a year,” she recalls. “Then I was done. I was tired. I thought: I’ve done my part, and my parents are doing better. I can go back to my old comfortable life.”

But by then, that “old comfortable life” was just a mirage.

In 2012 her leadership abilities were called upon again when she was asked to run for State Assembly in the upcoming election. Although she hesitated at first, it was her sense of social responsibility that helped her make the choice.

“We’ve had absent representation for my whole life. I realized I had to sacrifice my comfortable life and become a public figure. I’d been private all my life. I’d been independent all my life. I’d been doing math all my life, so you don’t get to talk to people all the time—and that all changed all of a sudden when I decided I was going to do this.  That sense of responsibility has continued to be my guiding principle.”

Garcia’s sense of social responsibility was shaped during her time at Pomona College. She came to campus at a time when anti-immigrant sentiment ran strong in California politics. She protested and organized against Proposition 187, which made undocumented immigrants ineligible for public benefits, and Proposition 209, which ended affirmative action in public universities.

“I was very aware of the opportunities and privileges that I had and how different I was from most of my peers back home who didn’t get to go to college or who did get to go to college but didn’t get to have the same opportunities I had at Pomona—personal attention, study abroad, or when I didn’t have money for books, being able to receive a grant for books,” says Garcia.

“It came with a sense of social responsibility. There were a lot of social justice discussions on campus when I was there. I was there as Prop. 187 had passed and Prop. 209 was going on, and Pomona College allowed those discussions to happen.”

That sense of social responsibility continued to guide Garcia well into her career as a teacher, and in her decision to run for the state Assembly.

In 2012, defeating a longtime incumbent, Garcia was elected to represent the 58th Assembly District, which includes the cities of Artesia, Bellflower, Bell Gardens, Cerritos, Commerce, Downey, Montebello, Norwalk and Pico Rivera. She was reelected in 2014 and is up for reelection again this November.

Garcia came into office with the stated goal of making politics more transparent and rebuilding the public’s trust in government, and in 2014, she introduced a wide-ranging package of ethics and transparency measures. Five of these passed and Gov. Jerry Brown signed them into law.

Garcia is proud of that accomplishment, but she’s not sitting back and relaxing. She likes to keep busy.

In her four years in office, Garcia has focused on three areas dear to her heart: good government and reform, environmental justice, and elevating and expanding the role of women in society and government. She chairs the Committee on Accountability and Administrative Review, and she is the vice chair of the Legislative Women’s Caucus.

“I decided that to be legislator, I was going to legislate to empower other women and change that. There’s a lot of work and not enough women, so I want to share the wealth with other women,” she says.

Among her most recent and lauded efforts is the so-called “Tampon Tax,” a bill that would repeal the sales tax on pads, tampons and other menstrual items. Although Gov. Jerry Brown recently vetoed the bill, Garcia is not giving up.

Recently, Garcia also introduced legislation to revise an outdated definition of rape—an issue brought to light after a judge sentenced former Stanford swimmer Brock Turner to six months after he was convicted on three felony counts of sexual assault. Garcia was moved to action after reading the open letter penned by the unnamed survivor in the case.

“Part of getting rid of our rape culture is talking about it, but it’s also about how we define it. … If we’re going to end rape culture, we have to call rape what it is—it’s rape.”

Although she’s faced a lot of setbacks, Garcia remains undaunted. Picking up lessons from her past, it seems like failure is no longer part of her equation.

When asked what advice she would give a younger Cristina or college students of today, she says simply, “Don’t do it all.”

Garcia says she did indeed try to “do it all” as a Pomona student, a habit that she carried over in her first years in the legislature.

“For a while I tried 20 different clubs [in college], but it’s better to find one or two that you’re passionate about and be really good at it,” she says. “This year I’ve pared it down to the basics, things I   really care about. So I only have seven bills that I’m working on. They’re a lot of work, but really hands-on and I’m really passionate about them, and I’m much happier about the work that I’m doing.”

Her advice to students: “Find something you’re passionate about and get engaged in it and figure out how you’re going to be engaged. Take on leadership roles like president or secretary.”

And Garcia is helping her constituents of all ages become agents of change. Her annual “There Ought to Be a Law” contest gives residents a chance to submit proposals to improve their community.

Last year, a local fifth grade class invited Garcia to their classroom for a special presentation on the nearly 1.5 million people of Mexican descent who were deported by executive order in the 1930s. “The students felt that history was repeating itself, so they did presentations; they wrote poems and books. They became activists and lobbyists,” she says.

Garcia encouraged the students to enter her contest and they won. Last October, they saw their proposal signed into law by Gov. Brown.

This year, all new public school history textbooks will include information about the Mexican Repatriation Act of the 1930s.

“I’m an idealist at heart,” she says. “I’m an idealist in the belief of the social contract, that in order to have a government that works for us, we have to invest in it.”

That’s a tall order, but Garcia is game. Sitting in her district office, Garcia says, “There are times when I joke: Can I retire now?”

Not for a while, it seems.