What does it take to become the most accomplished Pokémon GO player in the world? Ask Nick Johnson ’11, the first person to catch all 145 Pokémon around the world.
October 25, 2016  by Gorden Haber 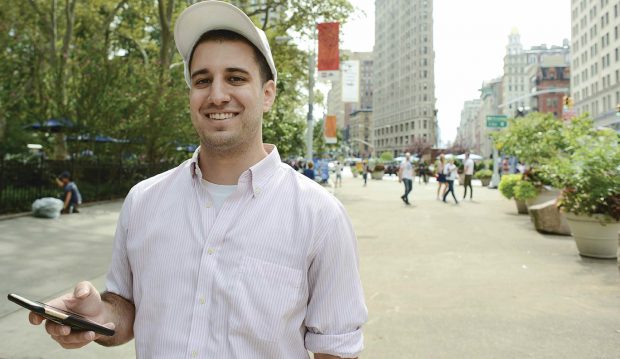 It was lunchtime on a bright early autumn day in Madison Square Park, a peaceful, leafy rectangle in New York City. The park was busy with office workers, chatting, eating, or just enjoying the mild weather. I, however, was trying to avoid walking into a tree.

“The trick is to not watch your phone,” said Nick Johnson, a tall young man in a t-shirt that reminded the reader to “Hustle 24-7-365.” Johnson was indeed hustling: he had a long stride and only an hour to teach me how to play Pokémon GO.

“Look out for that fence,” he said.

Pokémon, you may recall, are fictional creatures that battle each other with the aid of their human “trainers.” The franchise was created in the late ’90s for the Nintendo Game Boy. It has since spawned dozens of iterations, from card games to plush toys to shrieking cartoons that you wish your kid had never found on Netflix. 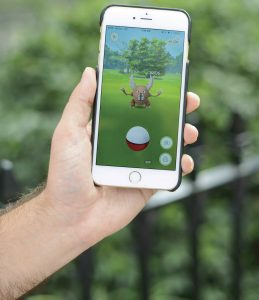 The latest version is the wildly successful app, Pokémon GO. Since its launch in July of 2016, Pokémon GO has been downloaded more than half a billion times—and grossed more than $500 million dollars. For a little perspective, that’s over twice as much money as Ghostbusters II.

The point of the game is fairly straightforward. You walk around “capturing” Pokémon. But when I downloaded the app, I had some trouble figuring it all out. First of all, I’m one of those unimaginative types who like to make their avatars resemble themselves. Unfortunately Pokémon GO offers no way to create a myopic bald man. (Are you listening, Nintendo?)

Once I got the game set up, I had problems figuring out how to play it. I was convinced that there was a Pokémon in my kitchen. After 20 or so minutes of fruitless searching, I realized that it was time to call in an expert.

When we met in the park, Nick also turned out to be a pretty good teacher—or, Pokémon trainer trainer, if I may.

Like many games, Pokémon GO is simultaneously simple and complicated.

As Nick put it, the game is just a “fancy skin on Google Maps.” Meaning that when you’re hunting Pokémon with your phone, you’re searching for creatures superimposed upon the map. It’s not hard to get the hang of it once you grasp the proportions. For example, what I thought was my kitchen was actually my local coffee shop.

When you get close enough to a Pokémon, you swipe to hurl your Poké Ball—a parti-colored sphere—at the creature. And when the ball hits, the creature is yours.

In Madison Square Park, it took me a few tries to catch my first Pokémon, a cross-eyed, bucktoothed, purple vole named Rattata. It was waiting for me by the statue of William Henry Seward, Abraham Lincoln’s secretary of state.

When the ball hit the Pokémon, my phone emitted a satisfying ping.

“There you go,” Nick said mildly. Meanwhile I experienced an absurdly outsized feeling of triumph. Perhaps not as triumphant as Seward felt when he blocked British recognition of the Confederacy, but triumphant nonetheless.

The more complicated parts of the game are the hovering “cube lures,” and hatching Pokémon, and raising up levels, and the possibility of having Pokémon battles with nearby players.

Nick explained all this stuff very patiently, and if most of it didn’t take, that’s more my fault than his. Nevertheless, I did glean some wisdom from the Ted Williams of Pokémon.

First of all, don’t use the camera.

“It makes it harder to catch them, and it kills your battery life.”

Second, as he’d already mentioned, “Keep your head up so you don’t die.”

Indeed, as we walked around Pokémon hunting, I almost walked into about 12 people. But Nick looked more at the real world than at his screen. Which is why he’s never had any Pokémon GO–related injuries. Unlike some other people.

“There was a Wall Street guy who was trying to get all the international Pokémon before I did. He broke his ankle in Sydney. He was hit by a car while trying to catch a Kangaskhan. After that he was like, screw this, and he went to Hawaii.”

Nick’s third rule: Walk in a straight line. There are rewards within the game for going certain distances, but the game measures distance as the crow flies: “So if you walk in a zigzag, it’s wasted energy.”

With Nick’s guidance, I caught a few more Pokémon. Then we grabbed a bench to discuss how a mild-mannered 20-something became the world’s greatest Pokémon GO player.

Did he consider himself a gamer?

“Gamer, nongamer—those categories don’t mean anything any more,” Nick said. “When you have 500 million people downloading an app, it just shows that in a way we’re all gamers. When I’m out playing, I meet everyone from little kids to retired people looking to get some exercise. My aunt is addicted to Candy Crush, but I wouldn’t call her a ‘gamer.’”

So if it wasn’t the gaming, how did he explain his obsession with Pokémon GO?

“There are two reasons I started. I watched the TV show when I was a kid, so there was that nostalgia aspect for me a little bit. The second reason was it’s kind of what I do for a living.”

Nick Johnson works as the head of platform for Applico, a tech advisory company. They help their clients build what’s called “platform” businesses. Many of today’s most successful companies—such as Google, Facebook and Uber—don’t make things; they own the platforms that connect people to one another.

In fact, along with Alex Moazed, an Applico colleague, Nick is the author of the recently published Modern Monopolies: What It Takes to Dominate the 21st Century Economy (St. Martins). The book explains how companies like Facebook gain an almost unassailable market share by “building and managing massive networks of users.”

So Nick wanted to understand the platform of Pokémon GO and how people interacted with it.

Then it became an obsession.

“I was playing the game every day after work,” Nick said. “I’d leave the office and go catch some Pokémon. Suddenly I realized I was close to catching them all. so I figured why not go for it.” 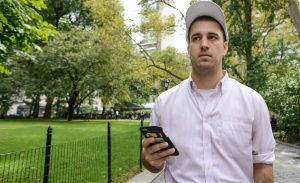 “Some nights I stayed up until 4 or 5 a.m. I’d go home, grab a little sleep, go to work, do it again. I mean, I was tired, but believe it or not, it was healthy. I lost weight. I started eating better, because you can’t be walking for hours on fried chicken. I learned a lot about New York City and I met people.”

“I did. That’s the thing that a lot of people don’t realize—that there is a social aspect to the game. People are on Reddit exchanging tips and advice. One night I was at Grand Army Plaza in Central Park, and there must have been 300 people out catching Pokémon. Old people, young people, families, tourists. Justin Bieber was supposed to be around, but I didn’t see him.”

“Was that a disappointment?”

After Nick caught the 142 Pokémon, he posted on Reddit about it.

“I answered some questions, went to sleep, and when I woke up, I had like 20 media requests.”

After appearing on shows like Good Morning America and in national newspapers like USA Today, Nick decided to take his Poké Ball around the world. In an admirable display of chutzpah, Nick got Expedia to spring for business class flights and Marriott Rewards to cover the lodging.

“I stayed in some sweet hotels,” he said.

In the span of four days, Nick caught the three remaining Pokémon in Paris, Hong Kong and Sydney, Australia.

Nick may be right about the pointlessness of categories like “gamer.” You’d expect someone with this level of devotion to be intensely single-minded. But he has other pursuits: He’s into soccer, or at least the European kind.

And with Nick there is a thoughtfulness alongside his intensity. Wind, Sand and Stars, the lyrical aviation memoir of Antoine de Saint-Exupéry, is his favorite book. He reads serious fiction by J.F. Powers, David Foster Wallace and William Gaddis.

While all these details demonstrate that Nick is a well-rounded guy, they don’t quite explain what drove him toward this kind of digital achievement. When I pressed him on this, he pointed to his T-shirt—“Hustle 24-7-365”—and smiled.

Nick had to get back to his desk. He had work to do. We shook hands, and the Pokémon GO master of the world headed for his office, his phone firmly in his pocket.

But I already had my phone out. I quickly canceled my next appointment. Then I stayed in the park to catch some Pokémon.