Backstage: Reaping What She Sews 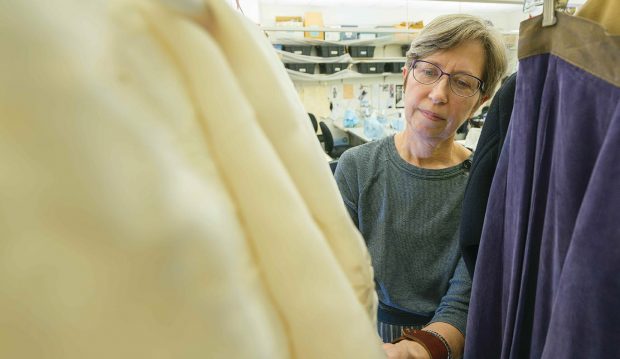 Suzanne Schultz Reed’s classroom is not your typical seminar room. Upon entering, visitors are immediately greeted by a costume rack boasting dozens of hangers and garments in various states of completion. Long project tables dominate the open space, ringed by smaller workstations furnished with bright white sewing machines and strips of fabric. The walls are covered in color sketches of period dresses and men’s breeches; visible in the supply cabinets are buckets of buttons and thread and pincushions. Today is Wednesday and the room is uncharacteristically quiet, humming only with the sound of sewing machines and soft conversation between Schultz Reed and her student worker, Amy Griffin (Scripps ’18). “On Fridays, I have six students working in the shop,” Schultz Reed explains. “It’s very social. Everybody’s chatting, everybody’s doing something, music is on. And—” here she grins wickedly—“I bring brownies on Fridays.”

Schultz Reed has been the Pomona Theatre Department’s costume shop manager for nearly 25 years, producing the costumes for every production the department puts on and teaching sewing to her nine to 16 student workers in the process. She has been sewing for over half a century, since learning from her mother, a sewing teacher, at the age of six. Schultz Reed came to Pomona from a freelance stint at South Coast Repertory, a Costa Mesa–based theatre company, after an accomplished career as a freelancer, a costume shop manager at Mount Holyoke College and a costume shop assistant manager for the Atlanta Ballet.

Although she possesses her own extraordinary design skills and has designed one show for Pomona in the past, Schultz Reed prefers working with her hands to making conceptual decisions about how the costumes should look. “When I went to grad school [at UNC Chapel Hill], I discovered that designing wasn’t what I really liked. What I really liked,” she confesses, “was making the stuff. I liked taking somebody else’s vision and turning it into reality.”

Now Schultz Reed takes the renderings of the department’s guest costume designer, Kimberly Aldinger ’11, and finds ways to bring her ideas to life on the stage. This can mean borrowing from other theatres, renting from costume shops or theatre companies, pulling from the department’s stockroom, or building new costumes from scratch. Gesturing to the sketches that decorate the walls, Schultz Reed explains: “Her renderings are my blueprints.”

Those blueprints reflect the fact that the needs of each production are very different. If a production calls for a costume that looks uncommon or serves a scene-specific purpose, it will most likely need to be handmade. “That dress, the pink one,” Schultz Reed says, gesturing to one of the renderings on the wall, “has three tiers of petals that have to come off during the show. There’s no way we’re going to find that, and no way we’re going to borrow it. So we’re going to have to build it.”

The biggest challenge of Schultz Reed’s job is making sure all the building and borrowing gets done in time. “You have to get it done by opening night,” she stresses. “There’s just no way you can fudge that. Tickets are sold; people are coming.” The dress rehearsals are crucial to this process. Often Schultz Reed will come away from the first dress rehearsal with pages of notes and 24 hours to address as many of them as she can before the next dress rehearsal. “In last year’s production of Urinetown, Amy had a fabulous quick change,” she remembers, smiling at her student. “She had to go from a dress and a wig and heels to a full-body black costume with a mask. In 30 seconds! We had to practice that.” Schultz Reed also worked on redesigning elements of the costumes to make the transition easier, such as replacing a real belt buckle with a magnetic replica. Those kinds of adjustments, from hemming dresses to swapping out collars to the rare overhaul and redesign of entire costumes, ensure that the actors aren’t inhibited from giving a great performance.

And while the actors are working hard onstage, Schultz Reed keeps her students working hard offstage. “I teach the basics to those who come in with nothing, and I try to expand the knowledge of those who come in with a lot of sewing experience,” she says. “You can really see their progress, and it’s a life skill that everybody should have— knowing how to sew. And being creative in here works a different part of your brain than traditional studying does.”

Here Amy chimes in, speaking up from behind her sewing machine: “One of the advantages afforded to you in the costume shop is that you get to produce something that isn’t attached to grades. You’re productive, but you’re not productive in a way that’s stressful. It’s about creating.”

Schultz Reed nods emphatically—to her, this job is about her students as much as it is about her own creativity—and adds: “One of my older students was talking to a newcomer and said, ‘Oh, you’ll love it here! It’s like having a sewing class, but you get paid to do it.’” She laughs. “That’s how I feel. You get paid to sew, to learn and to have fun.”