How to Become the Creativity Guru of the 5Cs 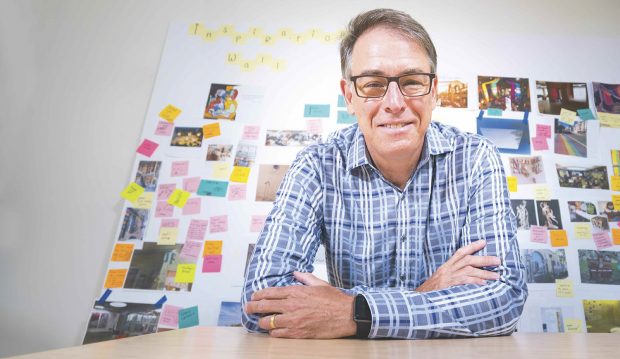 Fred Leichter likes to tell the story of the 2000 election ballot from Dade County, Florida. “It was so poorly designed,” he says, “that an inordinate number of votes that were meant for Gore went to a third-party candidate instead. And that swung the whole election and the presidency to Bush.”

For years, he kept a copy of that ballot on his wall with a note saying “Design matters.”

Today, as the founding director of the Rick and Susan Sontag Center for Collaborative Creativity, Leichter is bringing that message to the students of The Claremont Colleges.

Known as “the Hive,” the center was conceived as a place where students could form creative teams, be intellectually daring and work collaboratively to address complex challenges.

Bringing dynamic experience in fields ranging from higher education to technology, Leichter built his career as a design innovator and executive for Fidelity Investments. As senior vice president for design thinking and innovation at the Boston-based firm, he led teams focusing on user needs and experimenting with ways to speed up innovation.

Along with his Fidelity role, Leichter has served as a lecturer at Stanford University’s Hasso Plattner Institute of Design (commonly known as the d.school), teaching such classes as Designing with Data, Visual Thinking Strategies and Project Joy: Designing Delight into the Workplace. His founding director role at the Hive also includes a faculty appointment as clinical professor of engineering at Harvey Mudd College.

President David Oxtoby said Leichter was chosen for his leadership skills, team-building experience and track record of design innovation. “We are looking to Fred to help spark an environment where students push into new areas, look at problems in fresh ways and seek out surprising solutions.”

The following is a how-to manual in seven parts, tracing Leichter’s path from childhood to the Hive.

Grow up a faculty brat at Columbia University. Go to a Waldorf school that emphasizes creativity. Attend Swarthmore, spending a “study abroad” semester at Pomona College. Wish there were such a thing as a computer science major, but since there isn’t, major in math.

After graduating, receive two job offers—teaching high school math or becoming a programmer on Wall Street. Choose Wall Street because it cuts “against the grain” of your previous life. Take graduate courses in computer science and spend lots of nights debugging COBOL programs.

Meet your future wife, Jennifer, a financial analyst, and when she takes a new job in Boston, abandon Wall Street to join her. Work at a software company until it goes bankrupt, and take away an important lesson: Failure isn’t permanent, and you can learn from it.

Get a job at Fidelity Investments and design their first website, with a user interface that is largely unchanged decades later. Learn about human-centered design and begin to think of yourself as a designer at a time when most people think designers are people who sketch clothes.

Meet George Kembel and David Kelley, who are launching the d.school at Stanford. When Fidelity sponsors a class at the school, spend time there and bring new ideas back to your firm. Build a state-of-the-art design-thinking lab at Fidelity to focus on innovation from the perspective of unmet human need.

Return to the d.school for a full year as a fellow, taking and teaching classes and working on projects for Fidelity. Tell your wife your new dream is to build a creativity program at a small liberal arts college like the one you attended, though the chances of that seem slim.

Two years later, learn about the director’s position at the Hive. Though you still love your job at Fidelity, decide that this is the perfect place to pursue your dream. Consult your kids and family and negotiate with the colleges over a great space for the Hive, but ultimately say yes.