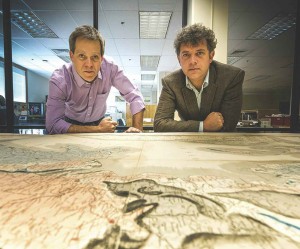 Two centuries ago, surveyor and geologist William Smith completed the ambitious task of mapping the geology of an entire nation. His detailed, hand-colored geological maps of England and Wales, published in 1815, changed the course of geology and remain among the field’s most treasured artifacts. (One of the remaining maps was recently made available for sale in Great Britain for £150,000.)

So it’s something of a feather in the cap of Pomona’s Geology Department that it is the proud owner of not one, but two of the historic maps. And with the bicentennial of the map’s release last year, one of them was brought out of safekeeping in the Special Collections of Honnold-Mudd Library to be restored.

“Because of the bicentennial, we felt it was the right time to renovate the map,” says Geology Professor and Chair of the Geology Department Jade Star Lackey. “It’s a great piece of history that we think all geology majors should be able to come and see.”

Because of the map’s size (more than two and a half meters wide), the restorers had to set up an aluminum platform over the top of the map to work from. Even so, the conservation process took nearly two months, including dry cleaning front and back, removal of a damaged cloth backing, wet cleaning, lining with Japanese paper and wheat starch paste, and mending tears.

The result is impressive to behold, not just for the brilliant and colorful detail in drawing and watercolor, but also for the rich history and monumental shift it caused in the field of geology.

“The map is a turning point of understanding that the pattern of nature has an order, that resources like coal or limestone are not just randomly scattered about the surface of the Earth,” says Geology Professor Robert Gaines. “This map actually makes predictions about what’s going on underground, and it suggests there is a recognizable order.”