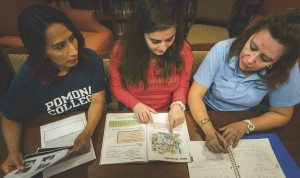 Mastering a second language is no easy feat, but it gets easier when you have help. At Pomona College, employees wishing to learn or improve their English have been getting assistance from students for more than 10 years now.

Employees gain language skills and students learn teaching skills, but at the core of the program are the relationships developed between students and the employees who often work in the background in housekeeping, dining services and grounds and are integral in keeping the College running smoothly.

Math major Luis Antonio Espino ’18, a student coordinator for the program, joined for very personal reasons. “As a first-generation immigrant, I grew up being a translator for my parents,” he says. “I dealt with the troubles of having to go to the doctor and seeing my parents struggle through that. That was one of the reasons I was interested in the doing the ESL program.”

Espino says that while in college, students are encouraged to develop strong ties with faculty, but he sees connecting with staff members as equally important. “One of the goals is to bridge that gap and have students recognize everyone’s equal worth,” he says.

Ani Alyce Schug ’17, a politics major who studies Arabic, Spanish and Swahili and grew up speaking Armenian, is in her second year as a student coordinator for the program, which is run by the Draper Center for Community Partnerships.

“It’s one of my favorite parts of being at Pomona,” says Schug, adding that while the majority of employees choose to learn English, some are looking for help in areas such as computers and GED prep.

“This is my first time taking ESL classes,” says Rosario Osorio, who emigrated from Mexico 12 years ago and now works in housekeeping. “We, unfortunately, arrive to this country to work and don’t have the financial means to go to school and take classes because we must immediately find work, and we have children to raise. But thanks to students at Pomona, we have this opportunity and we should take advantage of it.”