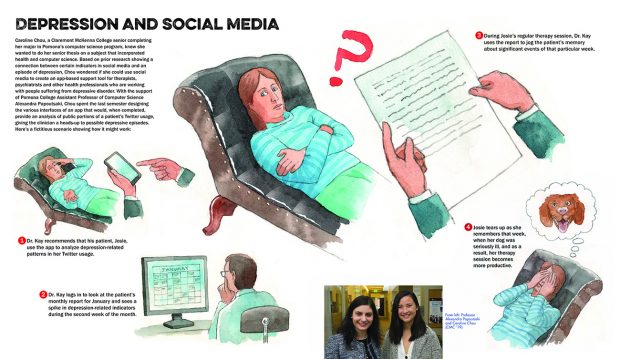 Social Media: Not the Answer

In your cartoon in the spring/summer 2019 PCM titled “Depression and Social Media,” fictional “Dr. Kay” (sadly not so fictional) provides some sort of “therapy” (using the word loosely) to fictional “Josie,” recommending she use an app to analyze her “depression-related patterns in her Twitter usage.”

Now wait a minute! My view from 35 years of actual clinical practice as a clinical psychologist is quite different. I wouldn’t say it quite so harshly, but my advice to young Josie:

“Josie, research is getting pretty clear, and the title of the cartoon you are in says it all: ‘Depression and Social Media.’ The increase in depression in your age group seems to be related, in part, to the proliferation of social media. I recommend you get off of Twitter! Also, fire Dr. Kay as he is incompetent and doesn’t know the literature about what helps people.

“It is other people.

“Perhaps Dr. Kay fears this assertion is not ‘scientific.’ He is wrong, the scientific data is actually very clear in this regard. Dr. Kay seems most thoughtful as he looks at his computer screen, where he (along with the surveillance capitalists at Twitter) renders your behavioral data. When you are, ironically, lying on the Freudian couch, he’s not looking at you, but at the ‘report’ that the app has rendered, and reminding you that your dog was seriously ill.

“Josie, do you really not remember that your furry friend was seriously ill?

“Maybe you have been conditioned to believe, as some of my clients have, that such an experience shouldn’t upset you, but clearly it does, and that makes a lot of sense. If you really don’t remember he was ill, we need to explore your rather severe dissociative disorder, perhaps caused in part by your overuse of social media.”

I make what is called a “right livelihood” working directly, face to face, with a broad range of people, including those in Josie’s generation. Many, on their own, without my saying anything, have realized they need to decrease their use of social media, and all would seem to prefer and benefit from relating to me, not an app, as we, together, uncover and explore their joys, sorrows, hopes and fears. It is profoundly rewarding work.

In Defense of the Federalist Society

The article “History & the Court” in the winter 2019 PCM, about Professor Hollis-Brusky’s analysis of a recent Supreme Court decision on guns, references the way federal courts may inadvertently, but sometimes intentionally, intrude on Congress’s plenary power to enact substantive law under Article I of the Constitution.

Professor Hollis-Brusky’s apparent call to view the courts as a vehicle to “throw out all the rules about what we ought to expect, [which] opens up a lot of possibilities for people who want to reimagine the way we are” is essentially a call to judicial activism. Jurists answering that call would be acting in a way irreconcilable with the Constitution’s foundational tenet of separation of powers, which vests in Congress, not the courts, the authority to create the law.

In contrast to Professor Hollis-Brusky’s call to judicial activism, the Federalist Society advocates that “the separation of governmental powers is central to our Constitution, and that it is emphatically the province and duty of the judiciary to say what the law is, not what it should be.” The Federalist Society’s solution for judicial activism is a judicial approach focusing first on the Constitution’s express words, and then, if any ambiguity exists, determining the Framers’ actual intent by focusing on what reasonable persons living at the time of its adoption would have understood the ordinary meaning of the text to be. This approach was followed in the Heller decision referenced by Professor Hollis-Brusky. The Heller decision reflects a proper judicial analysis of the Founders’ original intent and meaning of the Second Amendment at the time of ratification.

Although Professor Hollis-Brusky asserts that such an analysis had been made many times over the 150 years preceding Heller, resulting in an answer contrary to the Heller majority’s approach and conclusion, the judicial record indicates otherwise. As the 8th Circuit held in U.S. v. Seay, “Prior to 2009, the Supreme Court had not examined [the Second Amendment right] in depth. This changed with the Court’s landmark decision in Heller.” Similarly, in People v. Aguilar, the Illinois Supreme Court (none of whose judges were, at the time of the opinion, members of the Federalist Society) unanimously noted that the U.S. Supreme Court in Heller “undertook its first-ever ‘in-depth examination’ of the Second Amendment’s meaning.”A consistent application of original intent thereby decreases the danger posed by the temptation for jurists to impose their own policy preferences into decisions and/or exercise judicial activism to change the law independently of the legislature.

I am writing with regard to the article in the spring/summer 2019 PCM about the potential research of Cynthia Nyongesa ’19 on virtual reality and individuals with ASD.

While we do not use VR as a therapeutic intervention, per se, we at AHRC Middle/High School in Brooklyn, NY (schools.ahrcnyc.org) have been using this technology with our students since 2017.

We have used VR to help our students simulate community experiences such as traveling via subway, making purchases and having social interactions, as well as using it a tool for “virtual field trips” and curriculum extensions. In our experience, VR is an easy-to-use, cost-effective tool for introducing more “real-life” situations to our students with ASD so that they are better    prepared to handle these encounters in the real world.

We appreciate that these novel and safe interventions are being investigated at Pomona College these days.

I’m at a point in life where one is inclined to be somewhat forgetful. Personally, I am a good example of that some of the time, but thankfully not all of the time. So when I saw my class note in the spring/summer 2019 PCM with the Class of 1950, I had to think twice: Am I Class of ’50 or Class of ’51? The ’50ers are a great group, but I really am a loyal ’51er and always will be. Thus I felt compelled to bring this little editorial glitch to your attention. 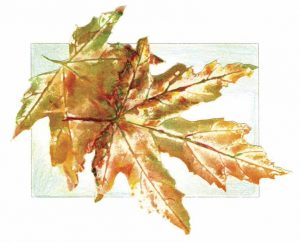 The spring/summer issue is a splendid piece of work in all ways, but unfortunately, it contains an error on page 52, line 7 of the Class of ’49 notes. I am a member of the Nature PRINTING Society, not the Nature PAINTING Society. If you will access the Nature Printing Society website, you will see that while our society is fairly young, the art of printing from nature is centuries old. I mostly print botanicals [see right] but have also printed fish (does gyotaku ring a bell?), feathers, squid, octopi, fossils, shells, snakeskins and really flat roadkill, and I even got to assist at the printing of an orca that washed up down-coast and was assigned to the museum for a necropsy. NPS also appears on Facebook, but since I’m a technological Luddite, I have no idea how to find it.

Concerning an error in “Smoke in the Wine” in the winter 2019 PCM, Sonoma and Santa Rosa were not “Spanish settlements” in what is today Sonoma County, Calif., as the article says. They were Mexican.