Cartoons with a Message

Liz Fosslien ’09 is the co-author and illustrator of the Wall Street Journal bestseller No Hard Feelings: The Secret Power of Embracing Emotions at Work. She is also the head of content at Humu, a company founded by Laszlo Bock ‘93 that uses behavioral science to make work better. In her spare time, she draws cartoons that have been featured in The Economist, The New York Times, and TIME. 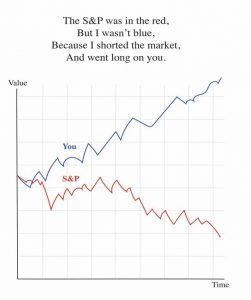 Q: When did you first start drawing?

I’ve always been an avid doodler. While I was working as an economic consultant in my early 20s, I started putting my feelings into charts and illustrations. One of the earliest projects I put online was “14 Ways an Economist Says I Love You”—super nerdy, but economists seemed to like it, which gave me the motivation to continue drawing in a more serious way.

Q: How do you come up with ideas?

A comedian friend of mine once said he only goes to gatherings he knows will be amazing or horrendous, because extremes give him the best material. I feel similarly. When I’m brainstorming ideas, I try to think back on the moments when I felt intense emotion, good or bad.

For example, last summer I went to a wedding that started at noon, which is a very early time to start an event that goes until midnight. I’m an introvert, so around 7 p.m. I could not bear the thought of one more small talk. The only closed-off, quiet area was the coat closet, so I went inside it, sat on the floor and started messing around on my phone. A few minutes later, another woman came in to do the same thing. We quickly bonded over being in the coat closet and then had a long and lovely discussion about all the things we’d done just to get some peace and quiet at a party. I made a cartoon out of that. 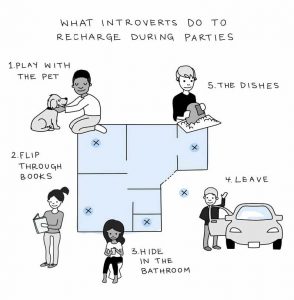 Q: How do you keep track of your ideas?

I send myself text messages. I tried writing ideas in a notebook, but it became too cumbersome to constantly be responsible for a notebook. Here are a bunch of idea texts I recently sent to myself: “weather forecast,” “coffee and garbage can,” “sharing and oversharing firehose.” They’re semi-nonsensical, but they usually do the job of jogging my memory. I don’t remember what the “coffee and garbage can” text meant, though, so it’s not a perfect system.

Q: What do you find funny?

Economics, the comic series Calvin and Hobbes, the book Catch-22, the human Larry David. And my partner—he is pretty funny.

Q: Many artists seem to have rituals. Do you have any?

So many. I’m most rigid about my morning routine. I’ve eaten the same thing for several years: seven mini-scoops of Trader Joe’s plain nonfat Greek yogurt and one s’mores Luna Bar. While eating breakfast, I read academic abstracts or, if there is a new episode, listen to the podcast Reply All.

Trader Joe’s has the best plain, non-fat Greek yogurt. My partner doubted there was any real difference between this yogurt and other brands, so we did a blind taste test. He fed me seven random spoonfuls of Trader Joe’s, Fage, Chobani, and Wallaby yogurts, and I had to identify which one was the Trader Joe’s yogurt. I got a perfect score.

More recently I’ve been experimenting with a new breakfast by swapping out the Luna Bar and swapping in peanut butter and walnuts. This is for health reasons only. The new breakfast is not as delicious. 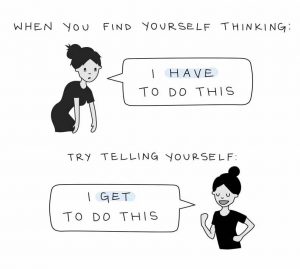 Q: Have you ever had a cartoon bomb?

Sort of. I posted this cartoon [next column] on Reddit, where it made it to the front page and was then promptly ripped to shreds by Internet trolls. The top comment was “Hooray, I get to have a colonoscopy!” and it went downhill from there. My parents thought it was hilarious. My dad, who lives in Chicago, still texts me from time to time. “I get to shovel the driveway again,” he’ll write. “I get to file my taxes.” 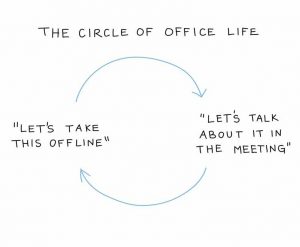 Q: You’ve written a book about work. What’s a good joke to tell when you’re late to an important meeting?

My advice is to be punctual to important meetings.