How the launch of a new building resulted in a broken bowling ball.
October 14, 2019  by Staff 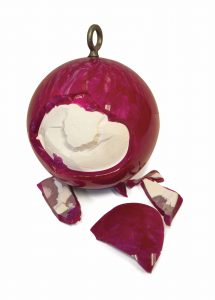 Professor of Physics and Astronomy David Tanenbaum keeps this broken pink bowling ball in his office as a reminder of a project that he considers to be one of the most important responsibilities of his career—playing the lead role in providing faculty oversight for the design, planning and construction of the new Millikan Laboratory for Physics, Mathematics and Astronomy. The last step in that long and arduous process was the grand opening of the new facility on Founders’ Day 2015. In planning for that special event, the question arose: How should they christen the new building? The answer to that question involved some showmanship, some real physics and, incidentally, the destruction of a bowling ball.

Built in the 1950s, the original Millikan Laboratory had become badly out-of-date, so in 2013 it was torn down to make room for a new, state-of-the-art Millikan, built upon the footprint of the original.

To dedicate this new building for physics, math and astronomy in 2015, the faculty didn’t want anything trite, like cutting a ribbon. They wanted nothing less than to smash an atom.

Not a real atom, of course. An atom made of papier-maché. The Math Department took on the job of creating the atom, using as a model the sculpture above the building’s front door.

Created for the original Millikan by artist Albert Stewart, that bronze sculpture, a striking but not-very-accurate representation of a lithium atom, is the only remaining feature from the original structure.

The next question was how to smash this make-believe atom. After some consideration, the faculty settled on two bowling balls, suspended by ropes from the ceiling, swinging down simultaneously from two sides to smash together in the middle.

Knowing that it would take some experimentation to create a safe and reliable way of smashing the atom, Tanenbaum and his colleagues bought several bowling balls and fitted them with hooks.

They then hung two bowling balls from the ceiling and devised a clever mechanism to pull them apart and release them at the same instant by the pull of a cord, so that they would swing down and collide.

Since there was only one papier-maché atom and it couldn’t be destroyed more than once, they concentrated on making the two bowling balls collide at the midpoint where the atom would be hung on the day of the opening.

In one test, the balls collided so violently that the resin covering of one ball shattered. After that, Tanenbaum used a cardboard box as a stand-in for the atom to cushion the blow.

For the event, then-President David Oxtoby was recruited to do the honors. Standing in a lift and wearing a hard-hat, he pulled the cord, and all of that hard work ended in a crash, with a thoroughly smashed atom.