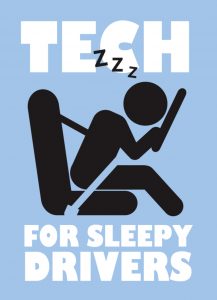 Driving back to campus from L.A. late one night, computer science major Eberto Andre Ruiz ’19 felt himself drifting off at the wheel. Worried, he grasped for a solution.

“I’m like, ‘Man, this is not safe,’ so I told Siri to set a timer for every five minutes,” he says. “I woke up the next morning and thought, ‘I’ve got to make an app for this.’”

“Basically we were interested in doing something that was ‘Tech for Good,’ an idea in some way applicable to the real world,” Nyberg says. “This is something that takes lives.”

Using a camera and eye-tracking software, they built a system that would vibrate the steering wheel if the program detected signs of drowsiness in the driver’s eyes.

One after another, checking out some of the 20 projects submitted after the Hackathon, students from the 5Cs sat down and gripped the makeshift steering wheel the team fashioned with the leather cover from the steering wheel of Ruiz’s Nissan Altima. Sure enough, they felt it vibrate when their eyes closed.

As a result, Olert took the Hackathon’s top prize for the best “Tech for Good” project.