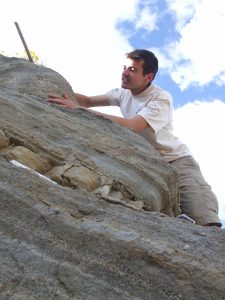 Sagehen Pride is now part of the very landscape of California.

Four years ago, while still at Pomona, geology-physics double-major Benjamin Murphy ’13, did his senior thesis on a geologic formation in Eastern California near Mammoth Lakes. Thanks to a serendipitously-located road, Murphy and his mentors, geology professors Jade Star Lackey and Robert Gaines, came up with the idea of naming it the Sagehen Formation.

A few years and some revisions later, their paper was recently published in the Journal of Sedimentary Research, making it all official.

Geologically speaking, the Sagehen Formation is a package of coarse-grained sedimentary rocks (sandstones and conglomerates) that were deposited within a lake in the Long Valley Caldera in California between 500,000 and 100,000 years ago, according to Murphy, now in his third year in a Ph.D. program at Oregon State University’s College of Earth, Ocean and Atmospheric Sciences.

How did they manage to name it after our mascot? A newly discovered formation must be named after some local landmark that is as near as possible to the “type section”– the place where the formation is best exposed and representative, says Gaines.

It turned out that Sagehen Road was one of the only named features anywhere near the type section. “Once we realized that, there was no need for discussion! It was obvious that it was both scientifically appropriate and awfully fun,” says Gaines.

For those new to Pomona, nobody is quite sure how the sage hen, also known as the sage grouse, became our mascot a century or so ago. A sizeable bird with spiky tail feathers, the sage grouse ranges over much of the West, but is not found in the Claremont area. In fact, the region where the Sagehen Formation stands is one of the only places in California where these birds roam, making the name a rock-solid choice.