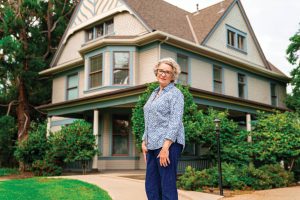 Jill Grigsby was a young woman in her late 20s when she began studying the aging process.

In June, she retired as the Richard Steele Professor of Social Sciences and professor of sociology after 38 years at Pomona. The researcher, in a way, has become her own subject, or at least the beneficiary of her own expertise.

For years, Grigsby has lent her knowledge to the City of Claremont as a member of its Committee on Aging. She helped create the Pomona College class auditing program that has spread across The Claremont Colleges, allowing senior citizens to sit in on many courses at no cost with the permission of the professor. She also has organized regular talks by professors for retired groups in the community. Now, she is among them, and turning her gaze inward.

“I have to realize now that the unexpected is really part of the aging process,” Grigsby says.

Whether that’s something like COVID-19 that affects everyone or something more personal, “there will be some other catastrophe and it’s realizing that life is not just going to go on smoothly,” she says, noting the many health issues that can arise as we grow older.

Even as she plans to travel for fun, Grigsby intends to continue pursuing her wide-ranging research interests, which include population trends, the high societal value of pets in Japan and suburban walking trails as gathering places for people of different races and ethnicities. With the privilege afforded her in retirement, she has taken a campus office in Baldwin House, built in 1890 and former home to the first College president.

“I know that it’s really important to construct a schedule,” she says. “So, I’m getting a new office and figuring out what my new schedule is going to be.”